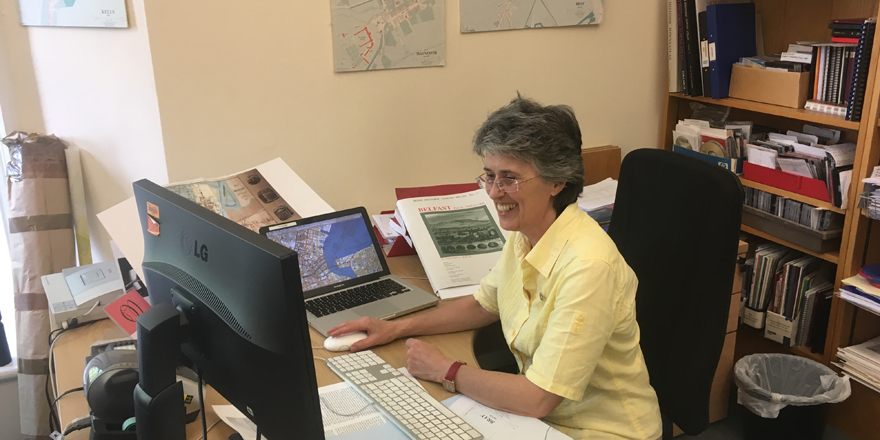 Jacinta Prunty has been a vibrant presence in all things IHTA-related over the last thirteen years as editor, and many more as an advisor and mentor. She has resigned from the editorial board of the Irish Historic Towns Atlas (and from her post in Maynooth University) and has moved to the town of Yambio in South Sudan to work in Solidarity Teacher Training College.

Her research expertise as an historical geographer in mapping, particularly the Ordnance Survey, her book on Maps and map-making in local history (2004) and the valuation records along with her nineteenth-century education and religious records acumen made her an expert in many respects of IHTA research.

Most recently, Jacinta was co-author of Irish Historic Towns Atlas, no. 28 Galway/Gaillimhe with Paul Walsh (2016) where we had a memorable launch in the Galway City Museum by President Michael D. Higgins. 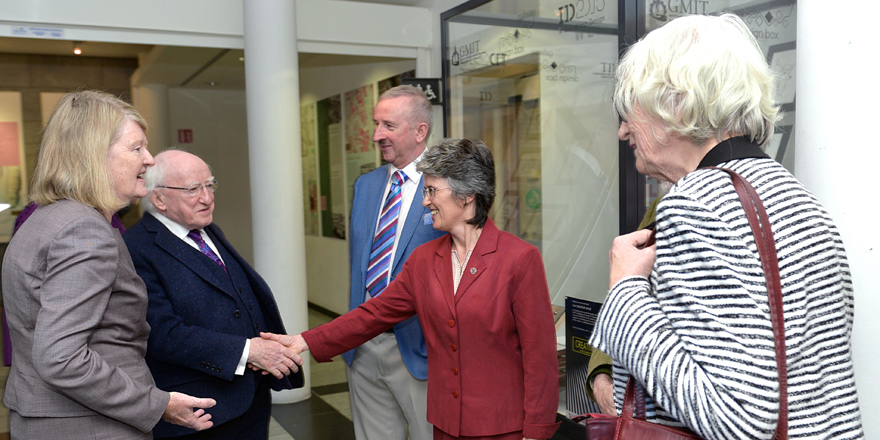 Jacinta Prunty and Howard Clarke with Carrie Fonseca and Seamas Cannon at the launch of Reading the maps in 2011.

She has also been a key person in the Maps and Texts seminar series that have taken place in Academy House every May since 2009. Often either presenting or chairing the various comparative sessions and linking people and research from Irish and European institutions. The proceedings of the first 6 seminars have been published as Maps and texts: exploring the Irish Historic Towns Atlas (2013) and More maps and texts: sources and the Irish Historic Towns Atlas (2018) with a third volume to follow.

Jacinta presenting during a Maps and Texts seminar 'Mapping Townscapes', 2017.

Jacinta is a member of the International Commission for the History of Towns and has been an active and enthusiastic contributor at annual meetings held across Europe. 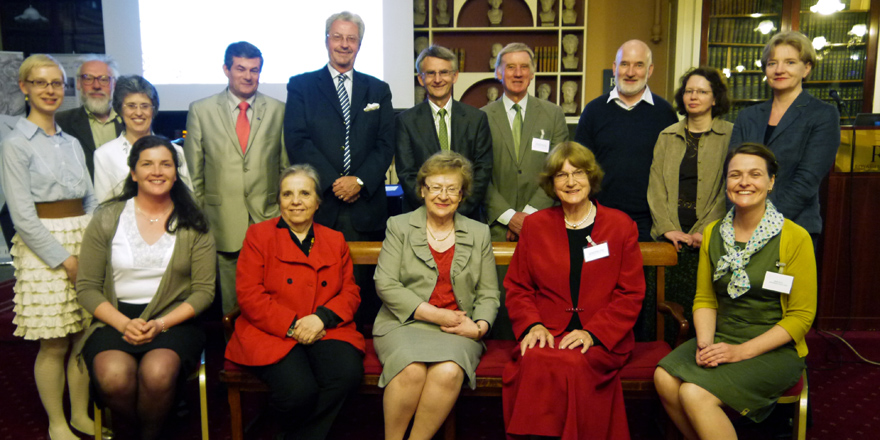 The Dublin Suburbs series was established under the initial guidance of Jacinta, backed by the IHTA board and Colm Lennon was appointed as the other series editor. Clontarf was published in late 2017 and subsequently sold out. Rathmines is due in 2021, followed by Drumcondra and Kilmainham/Inchicore. 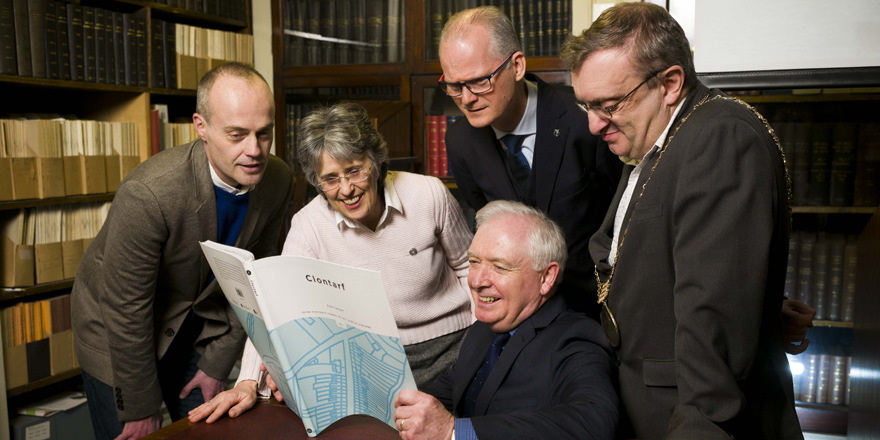 Jacinta also sat on the IHTA Digital Working Group to assist in a progressive move to Geographic Information Systems (GIS) that utilises the interactive nature of the atlas, and IHTA Online, which has made twenty-seven IHTAs available free of charge on the IHTA website. 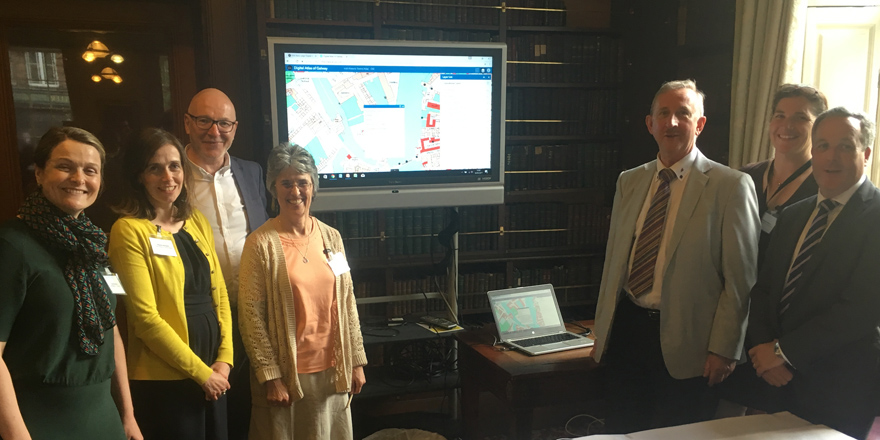 Members of the IHTA team with Eamonn Doyle, ESRI, Paul Walsh and Colin Bray, OSI at the Digital Atlas of Galway launch, 2017.

As a mentor, Jacinta has introduced Maynooth University students to the research elements of the IHTA as part of the SPUR scheme. Students gained experience working in repositories such as the National Archives, Valuation Office, Registry of Deeds, National Library of Ireland and the Royal Irish Academy Library along with valuable workshops and different elements of urban history. 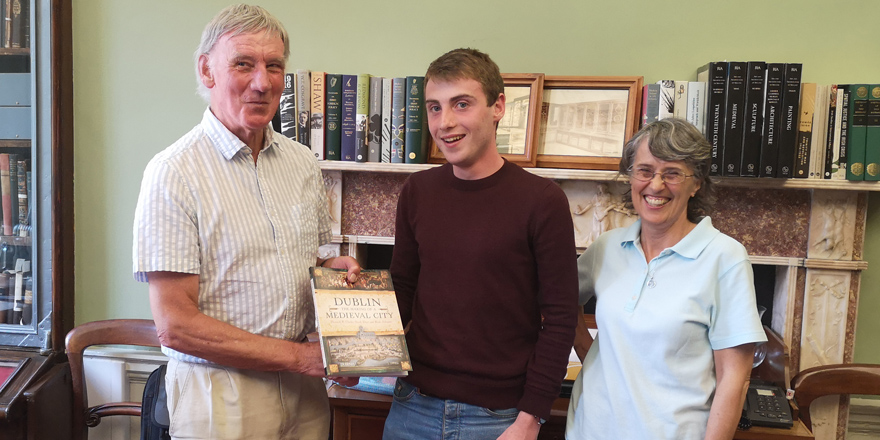 In 2019, after serving a term as Head of the Department of History in Maynooth University, Jacinta spent four months in teacher education in Yambio, South Sudan. With the backing of her community, Holy Faith Sisters, she has just returned to Yambio to work as a lecturer and in curriculum development in the local Solidarity Teacher Training College.

We will miss her as part of the IHTA team but know that a map will never be far from her reach, along with many coloured pencils. 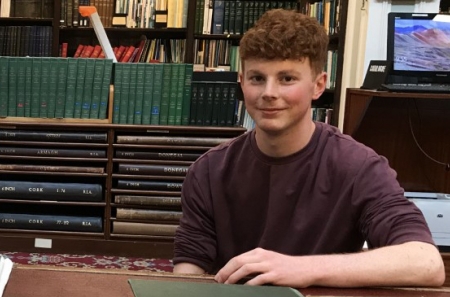 Maynooth University student, Ben Callan, gives an account of his experience with the Irish Historic Towns Atlas as part of the Summer Programme for Undergraduate Research (SPUR) scheme where he worked on... 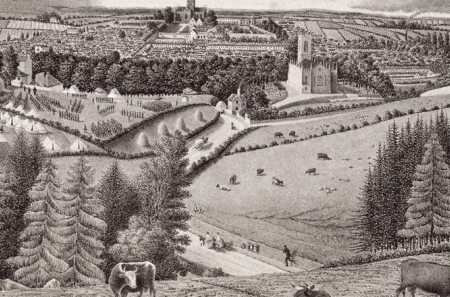 IHTA Town and Country seminar series draws to a close

Town and Country: perspectives from the Irish Historic Towns Atlas had record numbers in attendance