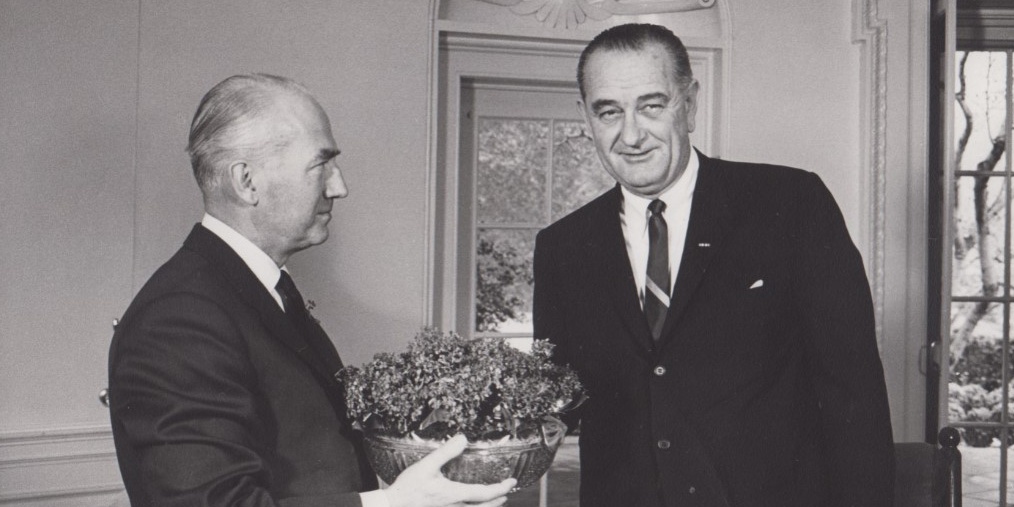 The twelfth volume in the Documents on Irish Foreign Policy series came out in November. Documents on Irish Foreign Policy Volume XII, 1961-1965 covers the first half of the 1960s, when Fianna Fáil were in power under Seán Lemass, and covers such topics as Irish attempts to join the then-EEC, Ireland's first stint on the UN Security Council and the Cuban Missile Crisis, the 1963 visit of John F. Kennedy, the repatriation of the remains of the executed 1916 leader Roger Casement from London, and much else besides.

The volume was officially launched by MInister for Foreign Affairs and Defence, Simon Coveney TD, with the release of this short film, using contemporary footage and photographs to highlight the contents of the volume. We have also collated some of the media coverage the new volume has received below to give a further flavour of its contents, and of the subjects it can be used to explore.

This collaborative piece between DIFP and RTÉ Archives links some of the newly-published documents with archival footage from RTÉ. DIFP staff have also contributed a short series of articles based on the volume to RTÉ’s Brainstorm platform, on the repatriation of Roger Casement, on why it matters to Anglo-Irish relations that Guinness might be a food and not a beer, on how Ireland was affected by the Cold War between the superpowers, and how Irish diplomats viewed the US in the 1960s.

In October the Trinity Long Room Hub hosted a webinar on the period covered by Vol. XII with a range of academics and former diplomats, with the participants offering their own analysis and recollections of some of the individuals and issues that appear in the volume; listen to the full recording here.

Prior to publication two pieces in The Irish Times, on cultural diplomacy and post-war emigration respectively, that touched on some of the contents of the new volume.The Irish Times also reported on some of the documents relating to the exhumation of Roger Casement and Ireland’s attempts to join the EEC, while the contents of the volume have been referenced in op-eds both there and in The Sunday Times.

John Bowman's weekly archives programme on RTÉ Radio One also explored some of the topics in the volume, as reflected in RTÉ's audio archives, and the volume was also the subject of a special edition of RTÉ's Brexit Republic podcast.

Finally, the volume was reviewed by David McCullagh for RTÉ and by Rory Montgomery for the Dublin Review of Books.

Cover image: Irish ambassador William P. Fay presents a bowl of shamrock to US President Lyndon B. Johnson at the White House on St Patrick's Day, 17 March 1965. Reproduced by kind permission of the Director of the National Archives of Ireland.