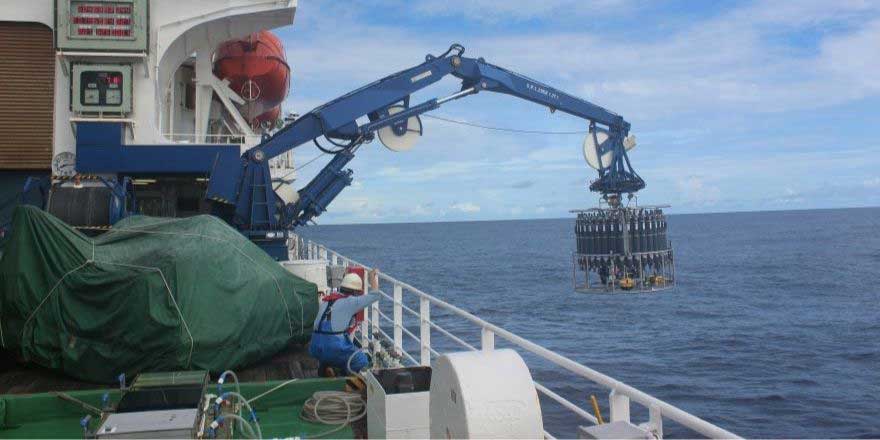 The role of the ocean in global climate: Interplay of natural oscillations and global warming

Measurements made in the ocean in recent decades have improved our understanding of the physical connections between ocean and atmosphere and of the role of the ocean in climate. Find out more in this blog by Professor Peter Croot, NUI Galway.

No. 10 in the Current Opinion Series of the RIA Climate Change and Environmental Science Committee

Most people when asked to describe the ocean likely start with waves on a beach or headland as this was their first introduction to the ocean and is the critical interface between land and sea. The ocean, however, covers 70 percent of the planet’s surface and most of this is beyond the sight of land. For this reason, perhaps, much of what the ocean provides for us, what scientists term ecosystem services, are also often overlooked in our daily lives. In this context, recent studies have shown that the ocean has absorbed around 9 percent of the excess heat due to rising greenhouse gas concentrations. [1] The oceans are currently acting to offset atmospheric warming due to increasing atmospheric carbon dioxide (CO2), as it takes more energy to warm water by 1°C (4.2 kJ/kg °C) than air (1.0 kJ/kg °C) and the oceans also transport this extra heat into the interior of the ocean where it no longer interacts with the atmosphere. [2] The ocean also plays a role in moderating CO¬2 concentrations in the air, as seawater absorbs CO2 from the air, and it is estimated that the ocean has absorbed 30 percent of fossil fuel emissions. [3]

The increases in atmospheric CO2 also directly and indirectly impact the chemistry and physics of the ocean, in what has been described as the ocean ‘warming up, turning sour and losing breath’.[4] Globally, ocean heatwaves are increasing in frequency and impacting marine life. [5][6] As the surface ocean warms it becomes increasing more thermally stratified, meaning a warm less dense layer of seawater forms at the surface. [7] This will slow the ocean’s ability to mix the extra heat from the increasing greenhouse gases away from the ocean surface. The uptake of CO2 by the ocean also leads to ocean acidification [8] with potential impacts on many marine organisms, most notably those that form calcium carbonate (CaCO3) such as corals, shellfish and pteropods, as the lowering of seawater pH results in a decrease in the abundance of carbonate. Reduced surface ocean mixing also makes for sluggish circulation and, along with increased respiration rates due to warmer temperatures, will result in lower oxygen concentrations in the tropical ocean and to an expansion of oxygen deficient zones. [9] These are areas of the ocean where the oxygen concentration may be too low to support many organisms, resulting in changes in their distribution with implications for fisheries. [10] Globally these are increasingly important issues for the ocean. However, around Ireland at present, while sea surface temperatures are increasing, we are yet to experience a major ocean heatwave. Similarly, the impacts of ocean acidification and deoxygenation are currently minimal. But this does not mean we should ignore the risks, as they will increase if greenhouse gases continue to accumulate.

The ability of the ocean to absorb and transport heat and nutrients makes the oceans the heart and lungs of the planet, and so it is vital that we keep a check on the health of this system. To make regular check-ups, marine scientists from around the globe have joined together in a series of international programs to take routine measurements of a suite of climate critical parameters in the ocean and atmosphere around the globe. The GO-SHIP program carries out repeat surveys along transects in all the ocean basins in order to build a global picture of ocean health.  In 2017, Ireland led a repeat survey of the A02 line across the North Atlantic for the first time using the Marine Institute’s vessel the Celtic Explorer, showing that smaller nations can make significant contributions to the GO-SHIP program.  New technologies also have a role to play and increasingly, near real-time measurements of temperature, salinity and other parameters are provided by a fleet of ocean-going floats and gliders, most notably through the international Argo program.

One benefit of all the measurements being made in the ocean over the last few decades has been an improved understanding of the physical connections between the ocean and the atmosphere and the role of the ocean in climate. As the ocean stores and then transports heat via ocean currents over long distances, it has the ability to influence climate globally and across different time scales. Perhaps the most well studied example of this is the natural climate oscillation known as the El Niño – Southern Oscillation or ENSO for short. During an El Niño, warm water develops in the central and eastern area of the equatorial Pacific and this causes a shift in atmospheric circulation leading to increased rainfall in the eastern Pacific, while reducing rainfall in the western Pacific. The opposite event, known as La Niña, sees cold surface waters returning to the eastern Pacific and warmer waters and subsequently increased rainfall to the western Pacific. [11] El Niño’s have a major impact on the global climate through what is known as teleconnections, where a strong El Niño may alter climate in locations far removed from the equatorial Pacific, affecting rainfall in North America and even Africa for example. At this point in time it is not completely clear how global warming will alter the frequency and duration of ENSO events. However, it is known that as the ocean warms it provides more heat for atmospheric storms, leading to the likelihood of more hurricanes, typhoons and cyclones, and that they will produce greater precipitation, wind speeds and persist longer, causing greater destruction on land. [12]

Less well known than El Niño, but seen as increasingly important, is the Indian Ocean Dipole (IOD). The IOD is an irregular ocean oscillation first identified in 1999, [13] where the western Indian Ocean alternates between warmer (positive phase) and colder (negative phase) sea surface temperatures than the eastern part of the Indian Ocean.  During a positive phase of the IOD, the area around the western Indian Ocean sees greater precipitation, while the eastern Indian Ocean region is drier. For 2019-2020 the IOD has been in a positive phase and has seen contrasting weather patterns on each side of the Indian Ocean; for instance, causing extensive drought and intense bushfires in Australia, contrasting with flooding in Indonesia and multiple cyclones in East Africa. In East Africa, high rainfall and warm temperatures facilitated breeding of locusts on a massive scale, resulting in swarms of locusts numbering in the billions seriously impacting people’s lives and devastating agriculture. (http://www.fao.org/ag/locusts/en/info/info/index.html) The intensification of the droughts and storms associated with the IOD is likely impacted by anthropogenic climate change and warming, and this is a hot topic of research.

In Ireland, anthropogenic warming will likely impact the frequency and severity of winter storms due to the North Atlantic Oscillation (NAO) and increase the chance of extra-tropical cyclones making landfall in Ireland. [14] Thus, it is increasingly clear that the frontline for climate change is everywhere; it is a global issue to which we are all connected via the health of the ocean.

What is your area of research expertise and where are you based?
I am predominantly a Blue Ocean Marine Chemist, based in the discipline of Earth and Ocean Sciences at NUI Galway. My primary research focuses on what factors control primary productivity in the ocean and how this is changing due to Climate Change. My main speciality is in chemical speciation, that is trying to determine how the abundance, distribution and reactivity of specific chemical complexes affect their bioavailability to plankton and other organisms. To do this I develop analytical chemistry techniques to determine elements such as iron and titanium at the extremely low levels found in the open ocean (https://www.geotraces.org). As sunlight is a major influence on primary productivity, my research group also makes many bio-optical measurements of the hyperspectral light field in the ocean.  We extend the data we obtained on sea going expeditions by comparing and combining with remote sensing data obtained from satellites (https://marine.copernicus.eu) ,  Argo floats (https://argo.ucsd.edu/) and very shortly using Gliders (https://www.marine.ie/Home/site-area/infrastructure-facilities/research-vessels/gliders).

What do you think is the single most pressing environmental issue facing Ireland?
Ocean ecosystems support life on earth but right now they are under multiple threats from human activity. The list of such threats continues to increase; polyfluoroalkyl substances (PFAS), microplastics and other emerging pollutants along with the “warming up, turning sour and losing breath” that I wrote about in the blog. In an Irish context, the most pressing environmental issue is the challenge of reducing our carbon footprint as it is the increase in greenhouse gases that is the single most important issue at present.

In your opinion what are some of the most compelling solutions to this issue?
In Ireland we are lucky to have a wide range of potential solutions available to us in moving to a low carbon economy as switching from fossil fuels to wind, wave, geothermal and solar energy is becoming cheaper and more efficient with each passing year. It is also important that the agriculture and forestry sectors in Ireland are included in the range of solutions examined as they are critical to the economy and there are innovative solutions available to reach net zero carbon (carbon neutral) emissions for these sectors.

What advice do you have for individuals to tackle this environmental issue?
Individual activities are also very important, Actions such as using low energy light bulbs, improving household insulation and using public transport all make a difference towards net zero carbon emissions.