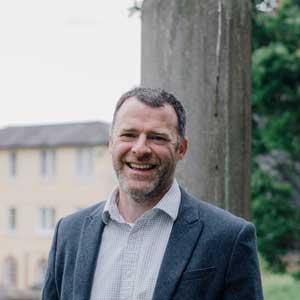 Dr Gerard McGlacken is a Senior Lecturer in Organic Chemistry at the School of Chemistry, and Vice-Dean of Research and Innovation at the College of Science, Engineering and Food Science at UCC. He leads a group of about 12 PhD Candidates and Postdoctoral Researchers in the area of sustainable organic synthesis.
Dr McGlacken obtained his B.Sc. at the National University of Ireland, Galway. He then moved to the University of York (UK) to work with Prof. Ian J. S. Fairlamb. A year later, he took up a 'Molecular Design and Synthesis Post-Doctoral Fellowship' at Florida State University (US) to work with Prof. Robert A. Holton. He obtained a Lectureship position at University College Cork in 2007.
His current research is in the area of sustainable organic synthesis applied to biologically significant molecules. Dr McGlacken has authored about 80 peer-reviewed publications and has received over 3000 citations. He is also a named author on a number of patents. He has received ca. €5 million in competitive funding. He works closely with the Pharmaceutical Industry (Ireland & US) and has received funding from Eli Lilly, Merck and Pfizer. In 2016, he was part of a Team which won the UCC Innovation of the Year Award. In 2020, he was the recipient of the President's Prize for Excellence in Teaching. In 2021, he was elected to UCC Academic Council. In 2022, he was awarded the UCC Research Collaboration of the Year Award.