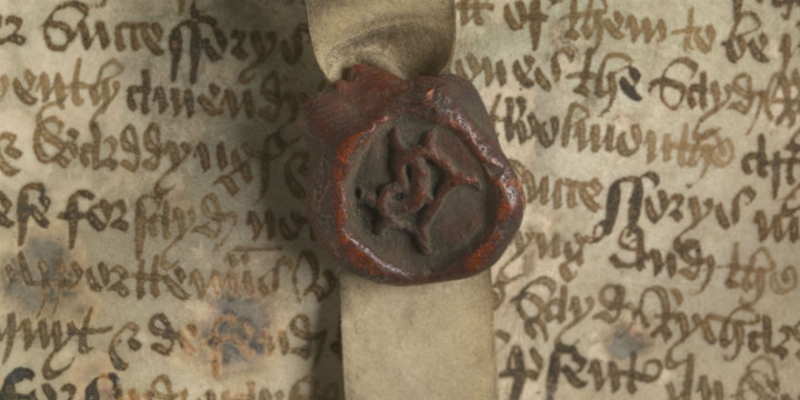 The medieval Guild of St Anne received charitable donations and bequests of property in Dublin. Its archival records are an important source for the history of the medieval city and county of Dublin.

The Guild of St Anne was established in Dublin in 1430, receiving a charter from King Henry VI (1422–61). Guilds or fraternities were associations that offered social solidarity and protection to particular interest groups in medieval cities. The Guild of St Anne continued to have a charitable role in the relief of the poor through to the late eighteenth century.

Through donations and bequests from its members, the Guild of St Anne became a wealthy organisation owning extensive property (lands and houses) in the city and county of Dublin.

Medieval guilds usually funded chapels within parish churches and paid for priests to sing masses for the benefit of their members. The chantry chapel of St Anne’s Guild was in St Audoen’s church, Cornmarket. St Audoen’s is the only remaining medieval parish church in Dublin. The chapel of the Guild of St Anne had become derelict by the eighteenth century but is now restored and accessible to visitors.

The Charles Haliday collection of manuscripts in the Royal Irish Academy includes medieval documents relating to the Guild of St Anne. Many of the deeds preserved in the collection record transactions relating to the properties owned by the guild. They are an important primary source for the history of the city of Dublin. The earliest property deeds in the collection pre-date the granting of the royal charter in 1430 but they relate to properties later owned by the guild. The ‘White Book’ (RIA, 12 O 13) records many of the charitable activities of the guild.

The Guild of St Anne ceased to exist in the early nineteenth century. Medieval and early modern manuscripts relating to the guild were acquired by historian and book collector Charles Haliday, MRIA (1789–1866). After his death, the Guild of St Anne manuscripts were among the extensive collection donated to the Royal Irish Academy library in January 1867 by his widow, Mrs Mary Haliday.

Outline list of the Guild of St Anne collection, with current shelf-marks

Contents are arranged chronologically, by reign of monarch.

Digital photographs of the collection of deeds were archived in 2013.