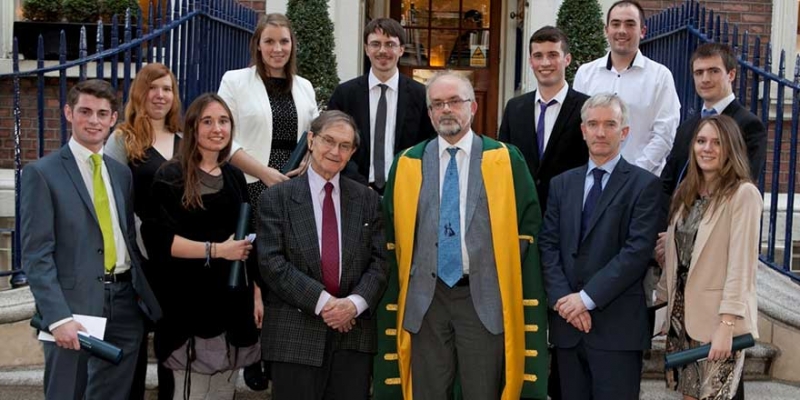 Sir Roger Penrose, Emeritus Rouse Ball Professor of Mathematics at the Mathematical Institute of Oxford University, is a well known promoter and communicator of science in England. Penrose is perhaps best known for his work on singularities, having developed and supported the hypothesis that black holes are formed from the collapsing cores of dying stars. His theorems, taken in conjunction with those of his colleague Steven Hawking, form the basis of our current understanding of singularities and the black holes which they create.

Penrose's accomplishments do not just range over cosmology, however. His has also made significant contributions to maths, physics and even philosophy. He is deeply interested in the fundamental inconsistency of quantum theory and the implications it might have on our understanding of computers, and through that, our understanding of the brain. He was elected an Honorary Member of the Royal Irish Academy in 2001.

"When, in 1843, Hamilton scratched the basic equations for quaternions on the stonework of Dublin’s Broome Bridge, his brilliant algebraic representation of Euclidean 3-space initiated a role for a non-commutative algebra (ab≠ba), and a fourth dimension, into the description of physics. Through subsequent work by Clifford, Minkowski, Cartan, Heisenberg, Dirac, and many others, Hamilton’s insights were developed in numerous ways, often taking his initial innovations in unexpected directions.

One such development was the theory of twistors, initiated in 1963 as a geometric algebra for the description of physics within Minkowski’s space-time 4-geometry. Though well suited to treating massless particles and fields, twistor theory attracted little attention from the physics community until the early 21st century, when it was found useful for describing the scattering of particles at very high energies. Yet, the theory remained obstructed from its ability to address the gauge forces of particle physics and Einstein’s general relativity, by the so-called “googly problem”, which limited its applicability to left-handed rather than right-handed interactions. A recent development opens a novel route to a solution, using Hamilton’s non-commutativity in an unexpected way."