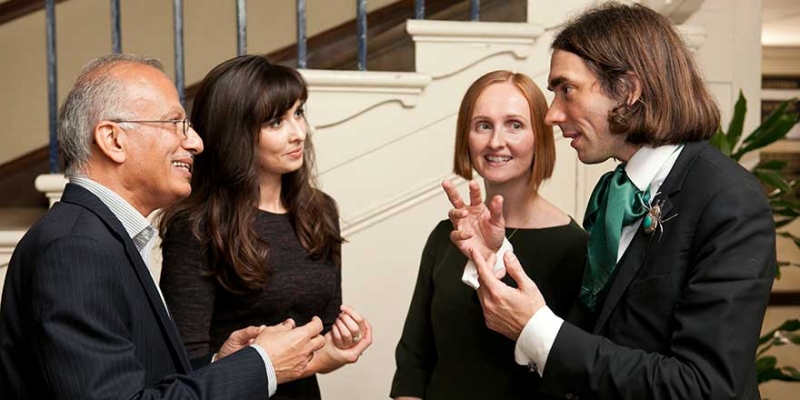 Villani, who is internationally renowned for his scientific work in partial differential equations and mathematical physics, gave a public lecture entitled Thinking the unaccessible -- Large time behaviours, from infinitely small to infinitely large to infinitely long

Villani has been the director of Institut Henri Poincaré since 2009-2017. His main research interests are in kinetic theory (Boltzmann and Vlasov equations and their variants), and optimal transport and its applications.

He has received several national and international prizes for his research, in particular the Fields Medal, awarded at the 2010 International Congress of Mathematicians. Since then he has served as a spokesperson for the French mathematical community in media and political circles.

Hamilton Day 2014: An interview with Professor Cedric Villani - What is the last number?

At 10am on 16 October 2014 the Hamilton Masterclass began in the Arup offices. This was an informal event with Fields Medallist Professor Cedric Villani and 28 participants, all undergraduate university students. Science journalist Dr Claire O’Connell chaired the class.

In the afternoon, a public conversation was held in the Royal Irish Academy. Mathematician Professor Cedric Villani, with Engineer Dr Salam Al-Sabah discussed the future of science, technology, maths and engineering with a view to motivate and engage young people. The voices of the mathematician and the engineer showed the diversity of opportunities open to students in these sectors. Science Communicator and educator Aoibhinn Ni Shuilleanbhain moderated the event attended by 80 professionals across engineering and mathematics.