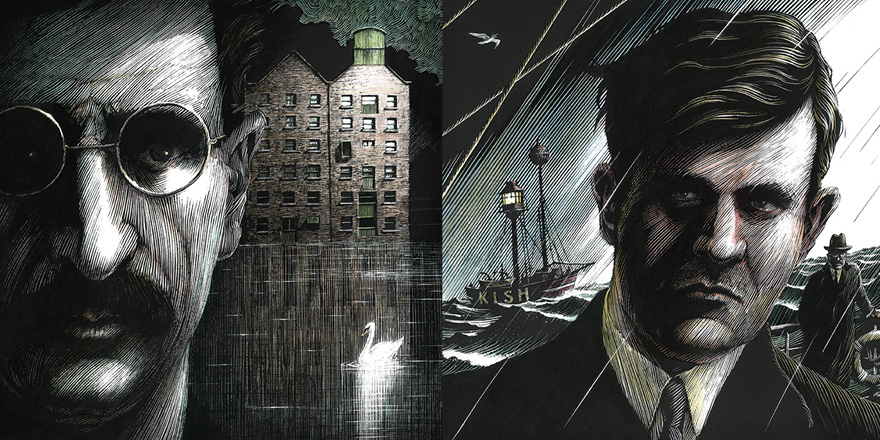 1916 Portraits and Lives is a project of the Royal Irish Academy that aims to highlight the lives a variety of people - men and women, British and Irish, belligerents and pacifists - involved in the events of Easter week. Artist David Rooney was commissioned to create 42 new and original scraperboard portraits, and the RIA team worked with David, providing him with the research that inspired his creativity. When it came to how to depict Michael Collins and Eamon de Valera, opinions were divided. The original sketches for the project presented the stereotypes of the Dev and Collins we know today. But how might they have been perceived in that tumultuous era? Join illustrator David Rooney for a practical demonstration of his scraperboard technique and hand colouring of lithographs, and Ruth Hegarty for a description of the commissioning process and the debates that took place over how to present Dev and Collins.

The Royal Irish Academy published a book of biographies of the people whose lives were, in one way or another, deeply involved in the Easter Rising: 1916 Portraits and Lives, edited by James Quinn and Lawrence William White, with illustrations by David Rooney. The biographies were extracted from the Academy's Dictionary of Irish Biography project. Artist David Rooney was commissioned by the Office of Public Works to illustrate the book and the original scraperboard portraits were then acquired for the state collections.

Ruth Hegarty is the Managing Editor of the Royal Irish Academy.

Michael Collins (1890–1922), born in Co. Cork, he was a staff captain in the GPO in 1916, and emerged as a leading figure during his internment in Frongoch camp. As the Director of Organisation with the Irish Volunteers, he masterminded their campaign in the Anglo-Irish war (1919-21). Having signed the Anglo-Irish Treaty, in 1922 he became chairman of the Provisional Government and commander-in-chief of the National Army. He was killed in an ambush in Co. Cork on 22 August 1922. Buy the print.

The portraits are lithographs printed onto 500x500mm (image area 280x270mm) cuts of uncoated Munken Lynx rough paper (170 g/m2), signed and numbered by David Rooney and limited to just 100 pressings. For this colour edition the artist hand coloured each print individually using a range of Windsor & Newton inks. The colour has to be applied very carefully and the nature of the tinting results in every print being totally unique.

Accessibility: Wheelchair accessible (up to 175Kg). ISL interpreter may be available on request; contact publications@ria.ie.