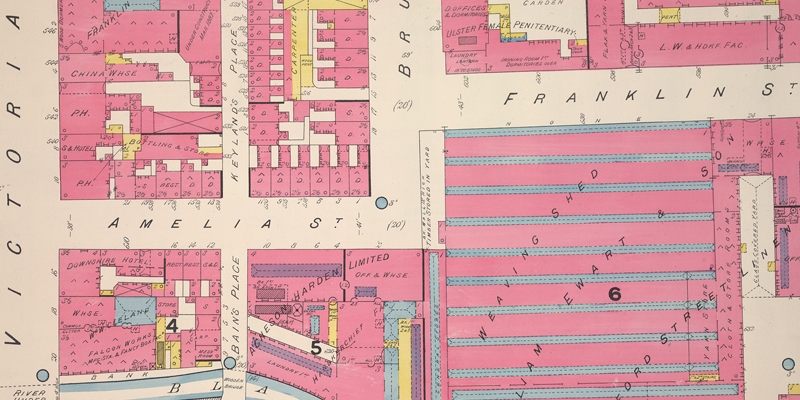 Jacinta Prunty on the 'town in the nineteenth century' 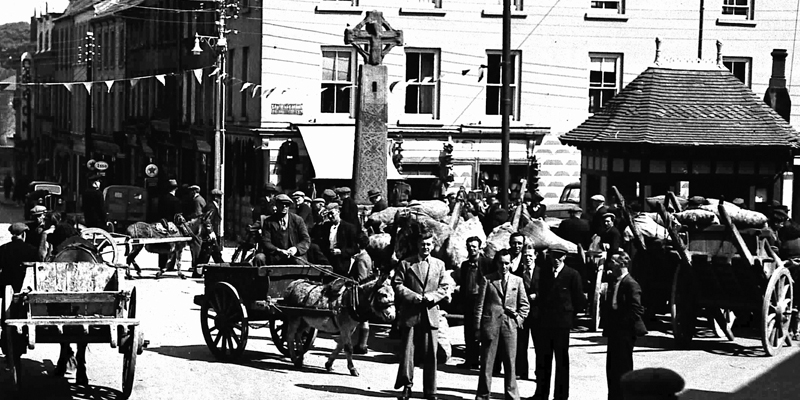 The late nineteenth-century photographs used in the Irish Historic Towns Atlas bear witness to urban innovations such as street lighting, paving, trams and telephone lines. Hotels and banks are prominent, as are public buildings such as churches, colleges, courthouses and town halls, all areas of major investment and civic pride in the nineteenth century. Views of shop-lined main streets, market places and fair-days (Figs 1-3) are reminders of how local trade underpinned the economy of most Irish towns; it is only Belfast that bears comparison with the great industrial towns of Britain in the nineteenth century while Dublin as the capital stands in a class of its own. 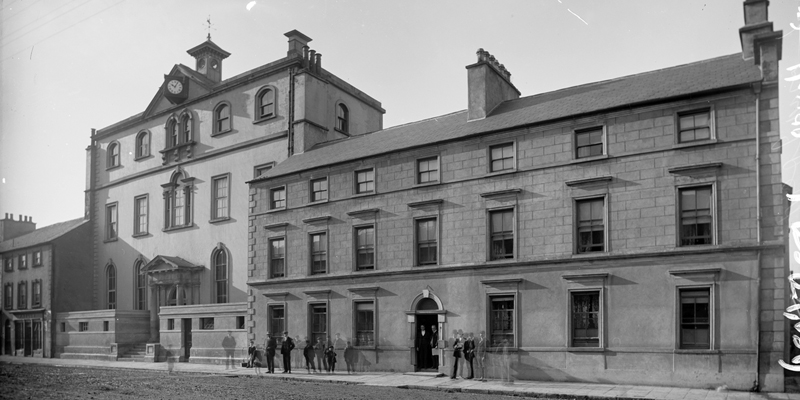 A start, at least, to making urban government more representative of those who lived in the towns, and more active in addressing their urgent demands, came with the Municipal Corporations (Ireland) Act in 1840; setting out the town boundary; and the division into wards (found in the Topographical Information sections 2, 5 and 7) was part of the preamble to municipal reform. The most obvious and long-running grievances of the townspeople were the first to be brought to the newly elected town councillors; Belfast moved quickly to provide public toilets and common sewers and to establish new markets and slaughter houses. Galway too made efforts to regulate its many and diverse marketplaces and slaughter houses, and to provide a new cemetery. The transfer of ownership to the town of what was later named Eyre Square was a particular achievement. 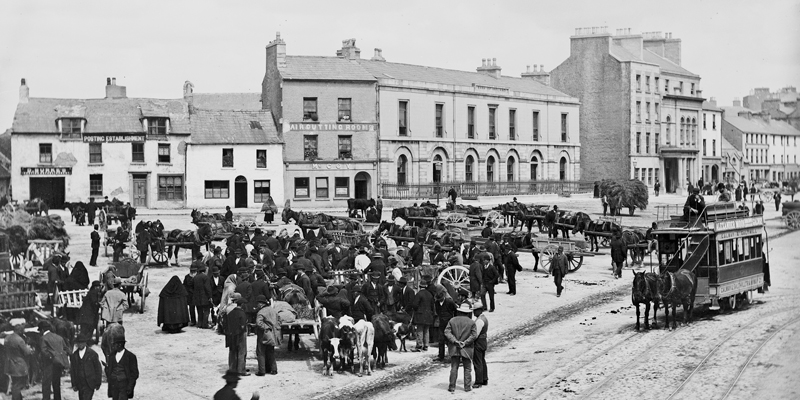 The funding of local government and of the Poor Law or workhouse system (1838) was through a tax on local property. The meticulous process by which property was valued, under the direction of the statistician Richard Griffith, reveals much about the social geography within Irish towns in the mid-nineteenth century; this can be combined with the census classification of housing (Topographical Information section 9) to measure change over time. Typically, three and four story houses dominated the commercial core or principal square, straggles of thatched cabins lined the streets leading into the town (figs 4, 5) with further low-value houses crowded into courts and back lanes. In Longford, for example, the valuation officers found poor, overcrowded housing effectively hidden from view in the long yards that stretched behind the fine townhouses, shops and businesses on Main Street. 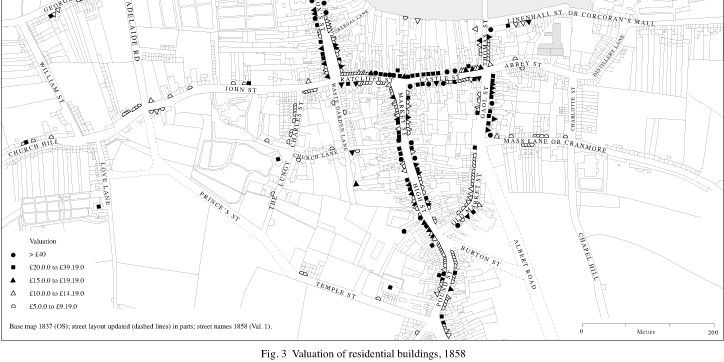 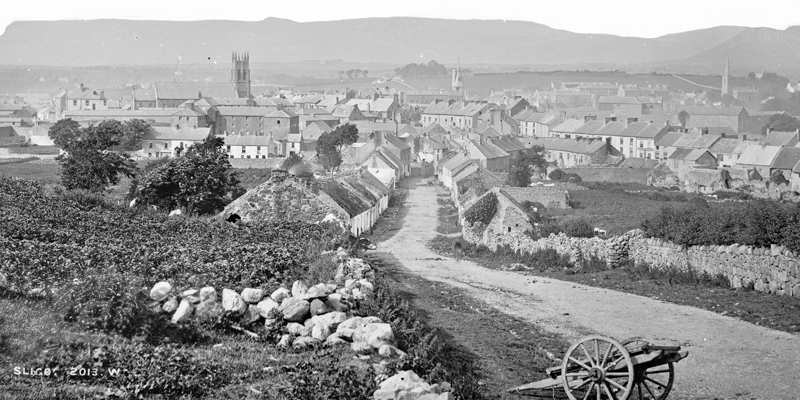 The impact on the townscape of steam-powered, factory-based industry is seen most dramatically in views of nineteenth-century Belfast (Fig. 6). The speed of new building, the rate of population increase and the sheer scale and diversity of manufacturing in nineteenth-century Belfast is simply astonishing. Dublin is in the same league in a very few select fields only, most obviously brewing (Guinness) and biscuit making (Jacobs). Associated with industrialisation is the new transport technology of the railway, also steam driven (Figs 6, &7). Reaching most though not all Irish towns, the railway line, with its associated bridges, viaducts, sidings and transit yards, cut through existing property lots, the station itself a conspicuous addition to the town’s architecture and – in some cases – bringing with it an impressive new hotel also. 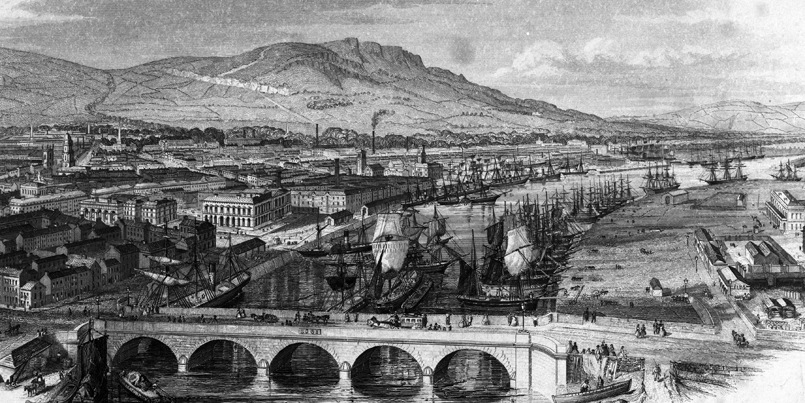 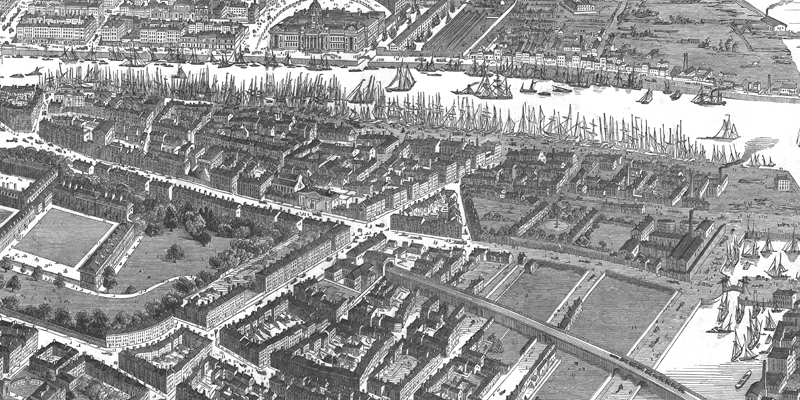 Horse-drawn coaches, carts and trams, canal barges, rowing boats and sailing ships all continued to play their respective roles in the transport system of the nineteenth century, but the transformative power of the railroad, bringing ideas, fashions and tastes as well as goods and passengers, would not be stopped. The elegant resort town of Bray was a railway creation, opening up the beauties of Co. Wicklow to the day tripper and to the holidaymaker, as advertised in maps and images (fig. 8). 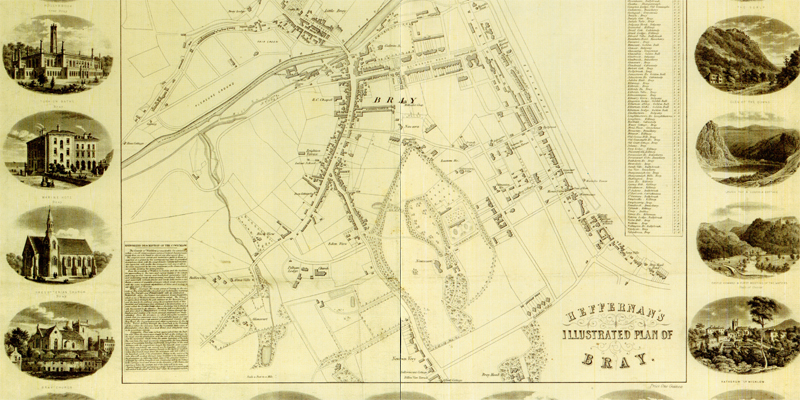 The rise in the demand for, and supply of, education was an aspect of nineteenth century modernisation that left its mark on the townscape. Very quickly, the numerous small, privately run schools that are named for every town in parliamentary inquires of the 1820s and 1830s are gone, overtaken by large and effective national schools in proper schoolhouses. In poorer towns with Catholic majorities, religious orders were very often invited for the express purpose of staffing a new school; the Presentation Sisters, Mercy Sisters (for girls) and Patrician, Presentation and Christian Brothers (for boys) were among the earliest and largest providers of primary and (in time) second-level education. The convents, chapels, schoolhouses and other buildings of religious congregations were generally to be found in the poorest parts of the town, where their architectural as well as social impact was all the more impressive. Where they were grouped together, around the parish church or cathedral, as in Mullingar and Longford, they made for a distinctive church sector, a far cry from the back lanes and low profile of the late 16th, 17th and even 18th centuries.

Suburban growth, an important aspect of the nineteenth century town in Ireland, was most pronounced in Dublin, leading to the ancillary Irish Historic Towns Atlas series on the Dublin suburbs. It was in the suburbs, with easy access to town by tram and later bus, that investment in new housing would be concentrated in the later nineteenth century. The photographic record (figs 2, 3) shows how the inherited building fabric would be intensely used right through the century; population stagnation or even decline, outside those few places that industrialised, led to little refurbishment or replacement. But the nineteenth-century town in Ireland, for all its problems (and they were many), was more inclusive of all its residents, politically and socially, and progress on making it a healthier, safer place to live benefited everybody.

IHTA Online is a collaborative project with the Royal Irish Academy and Eneclann (Irish Genealogy and History Research Services). The cover, essay, topographical information, core maps and bibliographies of IHTAs 1 to 27 are freely available as pdfs online.

To read Anngret Simms on the 'Monastic town' click here.

To read Howard Clarke on the 'Viking town' click here.

To read Michael Potteron on the 'Anglo-Norman town' click here.

To read Colm Lennon on the 'town in the eighteenth century' click here.