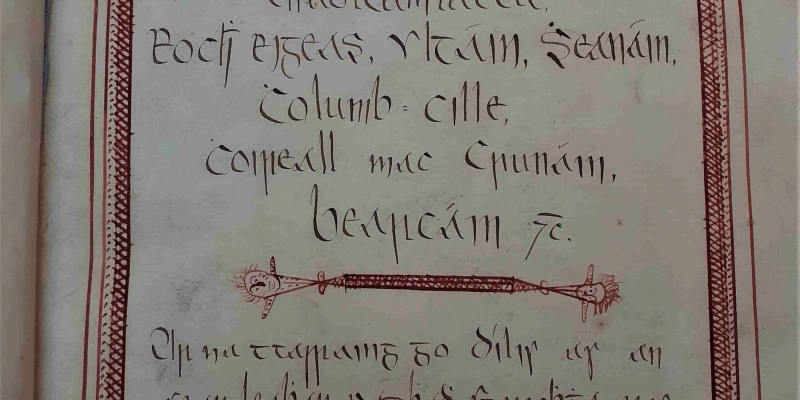 The Royal Irish Academy (RIA) purchased a collection of 53 manuscripts in the Irish language from John O’Daly in March 1869 for £50. A few other manuscripts were acquired from him at other times. Some manuscripts formerly owned by him also came to the Academy with other collections.

John O’Daly (1800–1878) was an author, editor, scribe, poet, bookseller, publisher and manuscript collector. He was an active supporter of the Irish language, and an enterprising publisher of material in the Irish language that had previously circulated only in manuscript form. Originally from Farnane, County Waterford, he moved to Dublin in June 1845 and established a bookshop there. He had previously operated a bookshop in Kilkenny, first at John Street in the late 1830s and later at Rose-Inn Street. While still in Kilkenny he published Reliques of Irish Jacobite poetry with metrical translations by Edward Walsh in 1844. A second edition was published in 1866.

In Dublin, John O’Daly was based first at 25 Anglesea Street (1845–7), 7 Bedford Row (1847–50) and then at 9 Anglesea Street from 1850. He sold books, political pamphlets and tracts, new and second hand, on history, antiquities and music. He also bought and sold manuscripts.

His shop in Dublin became a meeting place for Irish scholars and for learned societies such as the Celtic Society (established 1845) and the Ossianic Society (established 1853). He served as honorary secretary of the Ossianic Society and was its publisher. In 1853 he also described himself as agent for the Kilkenny and South East Ireland Archaeological Society and the Ulster Journal of Archaeology and ensured that their publications were available for sale in Dublin.

O’Daly issued occasional printed catalogues of publications he had for sale and he also advertised his stock at the back of the more substantial books he published. The Academy Library holds some examples of the catalogues he issued in the course of his work as a book dealer. His customers included the antiquary John Windele, in County Cork (RIA, MSS 4 B 11/78; 4 B 12/45). His commercial catalogues are an important source of information on Irish-language publishing (Sharpe and Hoyne, 2020).

In common with some other booksellers in Dublin in the mid-nineteenth century he was a publisher as well as a bookdealer.

In 1846 O’Daly published Féin-theagasc Gaoidheilge. Self-instruction in Irish or the rudiments of that language brought within the comprehension of the English reader without the aid of a teacher.

In 1849 he edited and published The poets and poetry of Munster, a selection of Irish songs by the poets of the last century, with poetical translations by the late James Clarence Mangan, now for the first time published with the original music, and biographical sketches of the authors by John O’Daly. A second edition was issued the following year and reprinted in 1851. The collection contained Irish texts with English translations of eighteenth-century songs. The target audience included the supporters of the Young Ireland movement and readers of The Nation who were interested in the Jacobite poetry of the eighteenth century.

O’Daly edited and published two series of Laoithe Fiannuigheachta, or Fenian poems in 1859 and 1861, as part of the Transactions of the Ossianic Society. He also served as the publisher and copy-editor of the four other volumes issued by that Society.

Towards the end of his life, O’Daly became a member of the provisional committee of the Society for the Preservation of the Irish Language (1876–7).

Through his network of contacts among Irish scholars and antiquaries John O’Daly was well placed to buy and sell manuscripts. His Waterford roots were important and in terms of manuscript transmission he was a channel through which some Munster manuscripts from the eighteenth century were added to the Royal Irish Academy collection.

John O’Daly began transcribing Irish manuscripts in the years 1824 to 1828, while still living in his home parish of Lickoran, and subsequently at Youghal in 1828–9. He was employed as a bible teacher by the Irish Society for some years and resumed his scribal activities from 1843 (De Brún, 1986, 76).

The manuscripts purchased from him in 1869 included short items in his own hand, some of them containing drafts of poems that had been published by him in his anthologies of Jacobite poetry.

Manuscripts purchased by RIA from John O’Daly in 1869

RIA, MS 12 E 24 (catalogue no. 907), a miscellaneous collection of Irish fragments, mainly songs, compiled by John O’Daly in 1845, with some material by other scribes (O’Daly collection)

RIA, MS 12 F 1 (catalogue no. 883), a small collection of verse penned by John O’Daly, with a printed list of contents (O’Daly collection)

RIA, MS 12 F 2 (catalogue no. 884), a small collection of verse penned by John O’Daly, with a printed list of contents (O’Daly collection)

RIA, MS 12 F 4 (catalogue no. 885), a collection of verse penned by John O’Daly and James Gleeson, with a printed list of contents (O’Daly collection)

RIA, MS 12 F 5 (catalogue no. 886), a small collection of verse penned by John O’Daly, with a printed list of contents (O’Daly collection)

RIA, MS 12 F 9 (catalogue no. 889), a small collection of verse penned by John O’Daly, with a printed list of contents (O’Daly collection)

RIA, MS 24 L 2 (catalogue no. 117(a)), includes a genealogy of the O’Briens copied by John O’Daly in 1852. Bound with fragments of five other manuscripts, of probable Munster origin, penned by other scribes (O’Daly collection, no. 16)

RIA, MS 24 L 29 (catalogue no. 162), penned by Seaan Mac Cosgrach, of County Cork, in 1731. Includes an English treatise on the Irish language, derived from Francis O’Molloy’s Grammar and other sources; some poems in Irish by Franciscan poets; a copy of Mícheál Ó Cléirigh’s Glossary (1643); and poems from the early seventeenth-century Contention of the bards. also two stanzas in praise of Donn Ó Failbhe as a harper, possibly in John O’Daly’s hand (O’Daly collection, no. [43])

RIA, MS 24 M 2 (catalogue no. 600), partly penned by John O’Daly in 1855. Other scribes are Standish Hayes O’Grady (1851), and possibly Nicholas Kearney. Mainly Ossianic verse; probably a working draft of material being prepared for a publication of the Ossianic Society (O’Daly collection, no. 5)

RIA, MS 24 M 13 (catalogue no. 983), a composite manuscript, including John O’Daly’s rough drafts of an edition and translation of Aongus Ó Dálaigh’s poem on the Tribes of Ireland, with comments by John O’Donovan (O’Daly collection, no. 2)

RIA, MS 24 M 37 (catalogue no. 638), transcript of Imtheacht na Tromdháimhe with an English translation: ‘The Journies of the Bardic College’ (O’Daly collection, no. 14)

RIA, MS 24 M 15 (catalogue no. 588), part of transcript by John O’Donovan of Mac Fhirbhisigh’s genealogical abstract, made for James Hardiman, 1842 (O’Daly collection, no. 55, presented March 1869 according to note followed by signature of then Librarian, J.J. Mac Sweeney)

Manuscripts purchased by RIA from John O’Daly at other times

RIA, MS 12 B2 12 (catalogue no. 1025), contains English poems by Matthew Graham, some of them translated from Irish. Scribe Matthew Graham (?) of County Louth; owned by Nicholas Kearney of Dundalk in 1841. Purchased by RIA from John O’Daly, April 1874.

RIA, MS 23 L 1 (catalogue no. 99), a composite collection of poetry, tales and genealogies, the work of four scribes and dating from the late eighteenth and early nineteenth centuries. The name of ‘Mr J. O’Daly’ is pencilled on inside cover (Hodges & Smith Collection).

RIA, MS 23 M 47 (catalogue no. 973), an eighteenth-century miscellany. The hand of the final portion has been identified as that of John O’Daly. Five items bound in one (Hodges & Smith Collection)

Other manuscripts formerly owned by John O’Daly, but not purchased by the Academy directly from him, are also in the RIA collection. These include some items acquired in 1853 through the William Elliott Hudson bequest (Proc. RIA, vi, 1,1853). These include the ten manuscripts with shelf-marks in the range RIA, MSS 23 M 25–34 (catalogue nos 15–24), which were originally a single manuscript. They were the work of Cork scribe, Eoghan Ó Caoimh (1656–1726) and were penned at various dates between 1684 and 1707. They consist mainly of poetry in Irish from the seventeenth and earlier centuries (William Elliott Hudson bequest).

RIA, MS 12 O 17 (catalogue no. 1123), a fragmentary literal translation by John O’Daly of an elegy on John Hoey, Drogheda, 1798. It survives among the RIA collection of William Elliott Hudson correspondence.

RIA, MS 23 B 5 (catalogue no. 433), a collection of poems penned by Tomás Ó Conchubhaire in 1828, with additions by John O’Daly (William Elliott Hudson bequest)

RIA, MS 23 E 5 (catalogue no. 525), a copy of Cath Chluana Tairbh in the hand of John O’Daly, written in February 1847; introduction, translation and notes in the hand of Nicholas Kearney (William Elliott Hudson bequest)

RIA, MS 23 E 23 (catalogue no. 541), transcript of Foras Feasa ar Éirinn, penned by Eoghan Ó Caoimh for Diarmuid Ó Suilleabháin in 1702–3; in O’Daly’s possession in 1852, when he added a note on flyleaf referring the reader to The poets and poetry of Munster for information about the scribe (William Elliott Hudson bequest).

RIA, MS 23 L 6 (catalogue no. 103), written by John O’Daly in 1826–7, a miscellany of poetry, tales, and some devotional texts, including a life of St Margaret. Later owned by Sir William Betham (Betham collection)

RIA, MS 24 B 33 (catalogue no. 594). This miscellany was the work of a wide variety of scribes, among whom was John O’Daly, who penned a life of St Margaret in 1845. The manuscript also contains poetry, prose tales and an Irish grammar. It came to the Academy as part of the Windele Collection, purchased in 1865.

RIA, MS 23 H 34 (catalogue no. 718), a verse compilation penned by a variety of scribes including John O’Daly at Kilkenny in 1844. Includes an Irish translation by John O’Daly of Charles Gavan Duffy’s poem ‘Voice of Labour’. Formerly owned by James Hardiman.

Note. The collection of manuscripts purchased from John O’Daly in 1869 was said to comprise 53 items. Most of the manuscripts have no markings to indicate provenance or previous ownership. They are identifiable through the descriptive entries published in Catalogue of Irish manuscripts in the Royal Irish Academy (Dublin, 1926–70), even though they are not all itemised under O’Daly’s name in the general index to that printed catalogue. The descriptive entries in the printed Catalogue of Irish manuscripts are more detailed than the catalogue entries currently available (2021) in database format in the Royal Irish Academy online catalogue of manuscripts (catalogues.ria.ie).

Following his death in May 1878, John O’Daly’s extensive book collection, together with some remaining manuscripts, was auctioned over three days in August 1878, at the premises of John Fleming Jones, 8 D’Olier Street, and dispersed. A priced copy of the auction catalogue issued by John Fleming Jones is held by the Academy Library.

A comprehensive list of manuscripts in the hand of John O’Daly that are preserved in other Irish and overseas archives, can be found in Ó Drisceoil (2007), pp 347–92.

Jones, John Fleming, Catalogue of books and manuscripts, on Irish history and antiquities, poetry and music, topography, philology, rare traces, maps and autographs, collected by the late Mr John O’Daly, bookseller, No. 9 Anglesea Street … to be sold at auction by John Fleming Jones, at his literary and general salerooms, No. 8, D’Olier Street, on Monday 19th August, and five following days, commencing each day at one o’clock (Dublin, 1878)

O’Daly, John, The poets and poetry of Munster, a selection of Irish songs by the poets of the last century, with poetical translations by the late James Clarence Mangan, now for the first time published with the original music, and biographical sketches of the authors by John O’Daly (Dublin: John O’Daly, 1849)