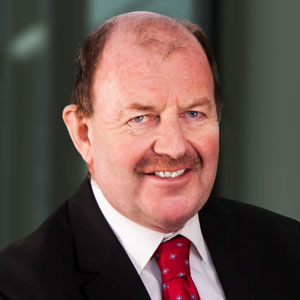 Professor Sir John McCanny is an international authority on special purpose silicon architectures for Digital Signal and Video Processing and Cryptography. He has published 5 research books, 360 peer reviewed research papers and holds over 20 patents. In 2016 he was appointed Regius Professor in Electronics and Computer Engineering at Queen’s University Belfast, the first ever such Professorship in Northern Ireland.

He has co-founded two successful high technology companies based on the work of his research teams, Amphion Semiconductor Ltd. – later acquired by Conexant, then NXP, then Entropic - and Audio Processing Technology Ltd - acquired in 2011 by Cambridge Silicon Radio, in turn acquired by Qualcomm in 2015.

He was responsible, within Queen’s University, for developing the vision that led to the creation of the Northern Ireland Science Park (now Catalyst Inc) and its £37M ECIT research flagship (www.ecit.qub.ac.uk) for which he is currently Director. In 2002 the Science Park was a “brownfield site”. Today 160 high technology companies are located there, employing over 2,600 people. He also led the initiative that in 2009 created the £30M Centre for Secure Information Technology (CSIT www.csit.qub.ac.uk ). CSIT, which is based at ECIT, is funded by EPSRC, InnovateUK, InvestNI and industry. It now has over 90 people and is the UK’s Innovation and Knowledge Centre for Cybersecurity. In the past six years CSIT has played a key role in the creation of over 1200 additional new jobs, in effect creating a new cybersecurity business sector in Northern Ireland.

Professor McCanny was a Member of Council of the Royal Academy of Engineering between 2009 and 2012 and a Member of Council of the Royal Irish Academy between 2013 and 2014. He has served on numerous Royal Society committees including its Sectional Committee 4 that elects Fellows in Engineering, chairing this in 2005 and 2006. He recently co-chaired the Royal Society Policy Steering Group on Cybersecurity leading to the publication of its report “Progress and Research in Cybersecurity” in July 2016. He also was a member of the Royal Academy of Engineering Dowling review, whose report on business-university collaboration was published in 2015. He was previously a member of the international advisory board of the German Excellence Centre on “Ultra-High-Speed Mobile Information and Communication” at the University of Aachen (2007 and 2012) and was a Member of the board of Ireland’s Tyndall National Institute (2004 -2011).