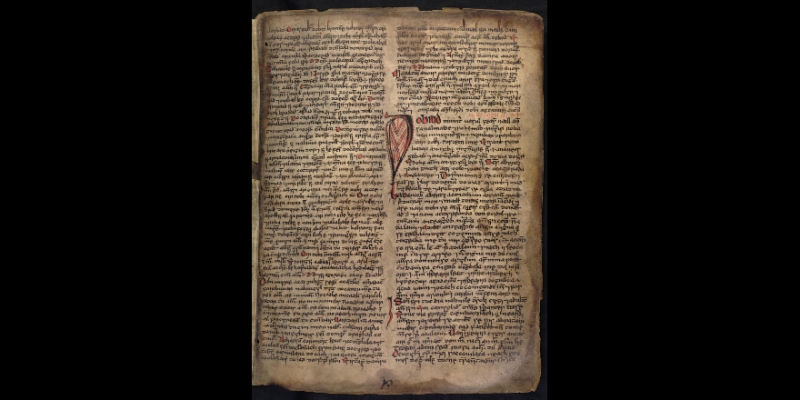 Written in Irish at various times, the work of various scribes with the colophon signed by the principal scribe Aedh. The names of two translators appear in the colophons: Seaán Ó Conchubair, who translated a tract on the Office of the Dying into Irish, and Uidhisdín Mag Raighin, who translated the Life of John the Evangelist. The manuscript is of Connacht provenance and from the names of places mentioned, written in Co. Roscommon. The contents are mainly religious tracts, lives of the saints, passions and homilies and some legendary episodes from the Ulster cycle and the tale of Fortinbras (Stair Fierabhrais).

The writing is in double columns and initial capitals are coloured throughout Vol.1 but not in Vol. 2. The manuscript is in fairly good condition with leather binding; some leaves are badly stained with consequent complete or partial obliteration of the content.

It is not known for whom the book was written. It was the property of John Fergus, M.D., a Dublin-based doctor from Castlebar, Co. Mayo, who died in 1761, and from whom the manuscript takes its name. Dr Fergus bequeathed it to his daughter Frances Arabella, who married a Kennedy. It was deposited in the Academy in 1875. In 1907 it was purchased from the heirs of James Marinus Kennedy for £35.

Digital images of the manuscript can be viewed on Irish Script on Screen.