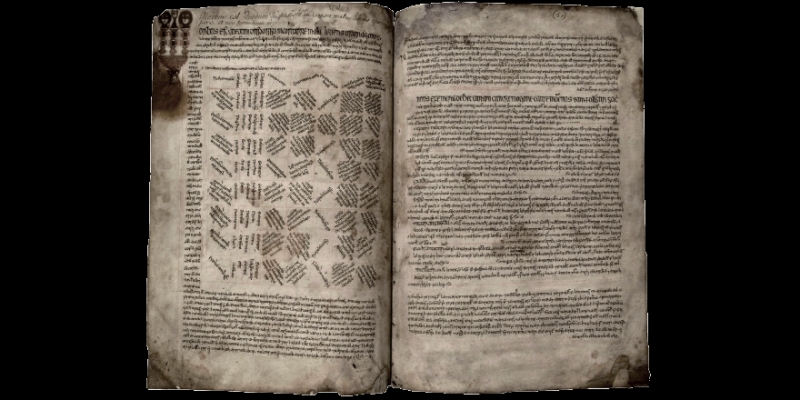 Written in Irish, with some Latin. Contains a translation from Latin into Irish of a highly organised medical treatise, with 44 tables outlining details of diseases, each divided into 99 compartments, across, aslant, and vertical. These are coloured red and black, and comprise descriptions of different diseases, showing name, prognosis, stage, symptoms, cures, etc., of the disease in question. There are rough decorative drawings at the top left margin of many pages. A. Nic Dhonnchadha has shown that the text is a faithful rendering from the Latin Tacuini aegritudinum, which was itself translated from the Arabic of the Islamic physician Ibn Jazlah (d. 1100) of Baghdad. This work was completed in Sicily in 1281 by Faraj ibn Salim (fl. 1273-82), a Jewish physician and translator. The text first appeared in print in 1532; therefore, the compiler of 23 P 10 (ii) must have been working from a Latin manuscript.

Eugene O’Curry, MRIA, recorded (H&S Catalogue III, p. 644) that the manuscript was bought for the Academy in the town of Galway from Thomas Keady, to whom it had come from the O’Lee family, hereditary physicians to the O’Flahertys. In the course of the 17th century a member of the O’Lee family told a ‘wild story’ of his having been magically transported to the enchanted Island of Hy Brasil and obtaining supernatural knowledge of medical cures there that were recorded in this book. The unusual appearance of the book convinced some people of the validity of this story.

During the 1990s MS 23 P 10 (i-iii) was conserved by Matthew Hatton at a cost of Ir£9,475 and rebound in three parts by John Gillis, Delmas Bindery, at a cost of Ir£4,290. Dr Aoibheann Nic Dhonnchadha advised on collation. Endleaves of calf skin vellum were added, boards were constructed from quartered oak, and each volume was covered in full alum-tawed calf skin. The conservation and binding work was completed in September 2000. The manuscript was digitised in 2001.

Digital images of the manuscript can be viewed on Irish Script on Screen.