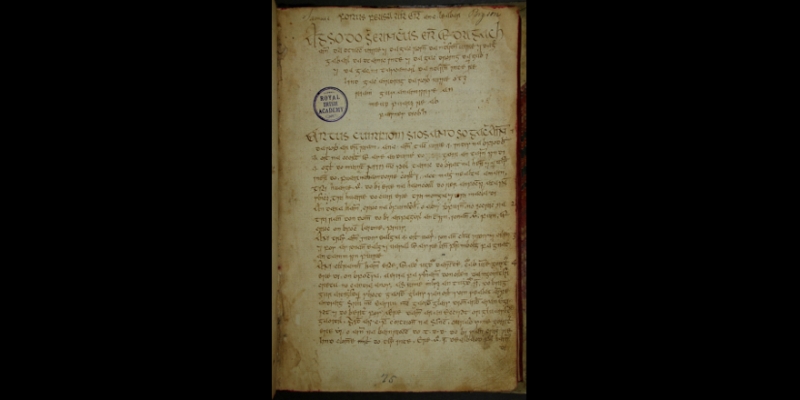 Foras feasa ar Éirinn was a history of Ireland in two parts. The first book spanned earliest times to the coming of Christianity, and the second from the time of St Patrick in the fifth century to the coming of the Normans to Ireland in the late twelfth century. The story of Ireland was presented in a manner that allowed the various peoples of Ireland, whether of Gaelic or Anglo-Norman ancestry, to be part of a shared origin legend.

Keating’s narrative history was preceded by a long preface in defence of the honour of Ireland, the Irish language and the nation’s history. The preface criticised foreign writers who had portrayed Ireland in a negative light.

Keating wrote in elegant Irish prose. He placed particular emphasis on the value of the Irish language as a repository of knowledge about the Irish past. As a Catholic priest, he also regarded Catholicism as one of the defining characteristics of the Irish people. Drawing these strands together, his history popularised a particular combination of myth, religion and history that became widely accepted from the seventeenth to the twentieth century as part of a cultural definition of Irishness.

The original manuscript in Keating’s own hand is not known to survive. Irish scribes made numerous copies of the Irish language text in the seventeenth, eighteenth and nineteenth centuries, and the Royal Irish Academy library holds an important selection of them.

At first glance, some of the copies that survive appear to be signed by Keating but in reality these ‘signatures’ are the work of a variety of different scribes; they are not Keating’s own signature. His name is usually given in English, as ‘Jeffrey Keting’ or similar, even in Irish language manuscripts, and this may offer a clue to the version of his name that he normally used.

There are approximately thirty extant seventeenth-century copies of Foras feasa ar Éirinn in archival collections. One third of those pre-date 1650, indicating that scribes began very quickly to make copies of Keating’s work. Many more manuscript copies were produced in the eighteenth and nineteenth centuries. It is a very long work, and it would always have been expensive to acquire a copy. Scribes only ceased the process of scribal publication when a full edition in Irish, with an English translation, was published by the Irish Texts Society in the early twentieth century.

Two seventeenth-century manuscript copies of Geoffrey Keating’s Foras feasa ar Éirinn from the Royal Irish Academy collections (RIA, 24 P 23 and 23 O 19) have been digitised for online publication in 2020. Free online access to the digitised versions will be provided in partnership with the Irish Script on Screen (isos.dias.ie) project at the Dublin Institute for Advanced Studies.

These seventeenth-century manuscript copies of Foras feasa ar Éirinn are imperfect, but their imperfections are revealing. The efforts of some later owners to make good the deficiencies of their manuscript copy of Keating’s history show that they had a genuine interest in the content of that history. In the absence of a printed edition, these fragile manuscripts, even though they were incomplete, would have been all that was available. They were not discarded as faulty. Instead, later owners did what they could to fill in any missing sections, but it may have been very difficult to find another more complete manuscript from which missing sections could be copied.

RIA, MS 24 P 23 is among the earliest known copies of the full version of Keating’s Foras feasa ar Éirinn. This paper manuscript comprises 414 pages, measuring 26.5cm x 16.5cm. The first scribe transcribed pp 7–302, and that part is dated 1641 at p. 220. The second scribe copied pp 302–414, and that section has the date 1646 at p. 368. The first 6 pages of the manuscript as it now exists are a much later addition. A later scribe attempted to supply the missing opening section of the Díonbhrollach (Preface) but did not complete the task.

The identity of the scribes of RIA, MS 24 P 23 is not known at present. It is hoped that online publication of the manuscript might lead to identification of the scribal hands, by facilitating palaeographical comparison with other Irish manuscripts of similar date. A digitised version of this manuscript can be viewed on Irish Script On Screen.

The manuscript now known as RIA, MS 23 O 19 is the work of Iollan mac Torna mic Muiris Uí Mhaolchonaire. It is a paper manuscript, made in 1643, and contains 154 pages. It measures 23.5 cm x 14.5 cm. It is written in a small, fine script, but yet on the last folio the scribe apologises to the reader for his lack of practice in transcribing historical documents. Unfortunately, this early copy of Foras feasa is now incomplete. It lacks the Díonbhrollach (Preface) and book I; folios 90–125 and 129–169 are all that remain.

The scribe of RIA, MS 23 O 19 was a member of the Thomond branch of the Ó Maolchonaire family of hereditary professional historians. The work of Ó Maolchonaire scribes was responsible for much of the early transmission of Keating’s work. This manuscript was purchased by the Royal Irish Academy in 1844 as part of the Hodges & Smith collection. (A significant number of the Irish manuscripts in that collection had a County Clare provenance.)

Some of the very earliest manuscript copies of the text, notably British Library, Egerton MS 107, University College Dublin Franciscan [UCD–OFM], MS A 14 (isos.dias.ie), and Paris, Bibliothèque Nationale, Fonds Celtique MS 66, contain a shorter version of the text and may represent the earliest form in which it began to circulate. Some of these manuscripts contain the date ‘1629’, which may be when a first draft of Foras feasa ar Éirinn was completed. The earliest surviving copy of Keating’s Foras Feasa ar Éirinn with a scribal date is British Library, Egerton MS 107. The scribe finished his work on that copy on 17 October 1638. UCD–OFM, MS A 14, is thought to pre-date 1637 but the scribes did not actually date their transcript. The copy in the Bibliothèque Nationale in Paris is dated 1644.

Now that more digitised manuscripts of Foras feasa from the seventeenth century are becoming accessible online it is hoped that it will be possible for scholars to study the variations between them..

Most of the extant manuscript copies of Foras feasa are based on the longer version of the text that was completed circa 1634. These contain a page reference to a book published in 1633. Of the seventeenth-century manuscripts to contain the longer version of the text, two strands survive. The first strand is preserved in the very earliest manuscripts, including RIA, MS 24 P 23 and UCD–OFM, MS A 15, and is believed to reflect Keating’s orthography more closely than later copies. The second, and ultimately more popular strand, based on the work of the Ó Maolchonaire scribes, contains more precise orthography.

Keating’s Foras feasa was also translated into English and Latin and the Academy library also has seventeenth-century versions of Keating’s history in those languages.

RIA, MS 24 G 16 (catalogue no. 1136) is believed to be the earliest English translation, and is a copy of a translation by Michael Kearney. Another seventeenth-century translation into English exists in multiple copies including National Library of Ireland MSS G 288 and G 293, and British Library Additional MS 4818. These manuscript translations into English have not yet been edited or published, and have received little scholarly attention. Other variant translations are also known to survive.

An English language adaptation by Dermot O’Conor was published in London and Dublin in 1723. A second edition followed in 1726.

The Irish text of the early part of the Irish Texts Society edition was based primarily on a number of Ó Maolchonaire manuscripts, principally Trinity College Dublin, MSS 1397 and 1403, while William Halliday’s partial edition (Dublin, 1811), based on a manuscript now King’s Inns Library (Dublin), MS 2, was also used. That, too, was an Ó Maolchonaire manuscript, written in 1657.

A text-searchable digital edition of the Irish text and a full English translation is available online, as part of the CELT project at University College Cork (ucc.ie/celt). The digital edition is derived from the Irish Texts Society printed edition.