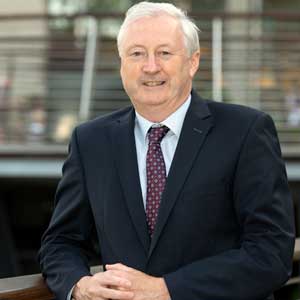 Martin Curley is Professor of Innovation at Maynooth University and  Director of the Digital Transformation and Innovation at the Health Service Executive (HSE), responsible for driving the digital transformation of Ireland’s health service.  Martin is a member of the Royal Irish Academy since 2011 and is chairman of the Irish Digital Health Leadership Steering Group, a grand coalition of clinicians, companies, academics, patients and policy makers driving the Digital Transformation of the Irish Health Service. Martin joined the HSE as Chief Information Officer (CIO) in 2018. Prior to joining the HSE Martin was Senior Vice President and group head for Global Digital Practice at Mastercard. Previously Martin was vice president at Intel Corporation and Director/GM of Intel Labs Europe, Intel’s network of more than 50 research labs which he helped grow across the European region. He also served as a senior principal engineer at Intel Labs Europe leading Intel's research and innovation engagement with the European Commission and the broader European Union research ecosystem.  Prior to this Curley was Global Director of IT Innovation and Director of IT Strategy and Technology at Intel. Earlier in his Intel career, he held a number of senior positions for Intel in the United States and Europe. He also worked in research and management positions at GE in Ireland and Philips in the Netherlands.

Martin has a bachelor's degree in electronic engineering and a master's degree in business studies, both from University College Dublin, Ireland. He received his Ph.D. in information systems from the National University of Ireland, Maynooth. Curley is the author of eight books on technology management for value, innovation and entrepreneurship. He is a Member of the Royal Irish Academy, fellow of the Institution of Engineers of Ireland, the British Computer Society and, the Irish Computer Society. Martin is co-founder of the Innovation Value Institute at Maynooth University, a unique industry-academia collaboration driving research and development of advanced IT and Digital maturity frameworks. He was previously a visiting scholar at MIT Sloan Centre for Information Systems Research and a visiting research fellow at the CERN Open Lab in Geneva. He was the inaugural winner of the Engineers Ireland Innovation engineer of the year in 2006 and was jointly awarded European Chief Technology Officer of the year for 2015-2016. Martin and his HSE Digital Transformation team won the International Chambers of Commerce/Mind the Bridge Global Public Sector Innovation award in 2021 for their work with Digital Health startups. Martin led the creation of a new Masters in Digital Health Transformation co-designed and co-delivered with the eight Irish Universities. He coined the phrase “Stay Left, Shift Left 10X” as a new paradigm for transforming healthcare using digital technology and works with other thought leaders and agencies to drive its adoption. In 2022 three International Healthcare and Business Magazines identified Martin as a top 10 Global Influential, Admirable and Impactful Health Leader. He was also recognized as a top 10 Inspiring educator and a top 10 futuristic business leader. He was appointed as a Visiting Professor at the University of Bath in August 2022 collaborating with the Centre for People Led Digitalisation.