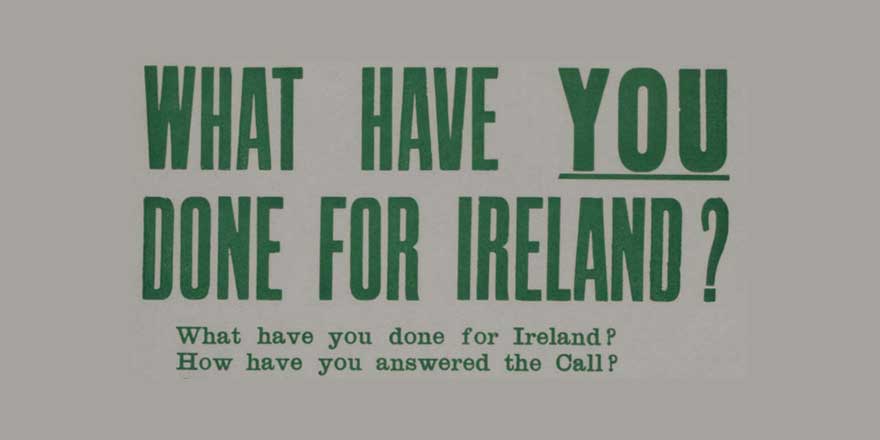 A Call to Arms

1 July 2016 marks the 100th anniversary of the start of one of the worst battles in military history. The Battle of the Somme lasted 141 days and claimed over a million casualties, including c.3,500 Irishmen. The First World War (WWI) raged on for another two years with the final death toll exceeding 38 million. Ireland’s Memorial Records, a Roll of Honour listing the names of Irishmen killed in WWI, runs to eight volumes and contains 49,400 names. There was no Conscription in Ireland, yet 140,000 Irishmen enlisted between 1914 and 1918. What propelled men to join up? What means did the British Government use to encourage men to take up arms and face an uncertain future in the battle fields?

One of the most well recognised means of recruitment was posters and they became a critical means of communication during WWI. The Academy Library holds 37 WWI posters, six of which were published by the Parliamentary War Savings Committee, London, encouraging people to buy war loans. The remainder are direct recruitment posters. Of these, all but one were printed by The Parliamentary Recruiting Committee, London. The collection includes one poster printed in Ireland and aimed directly at Irishmen. It is entitled ‘What have you done for Ireland’ and was printed in Dublin in March 1915 by Alex. Thom.

The lack of local printers being used in the production of recruitment posters is mentioned in the 11th Annual Report of the Dublin Industrial Development Association printed in the 1 July 1916 issue of the Irish Industrial Journal:

‘It was discovered that a large number of the posters so extensively used for recruiting purposes by the War Department were printed in England. The matter was taken up by your Council with the result that the printing of such publications is now entrusted to local firms.’

So, what methods did the posters use to encourage recruitment?  One of the earliest posters in the Academy collection was printed in November 1914 by The Parliamentary Recruiting Committee, London. This poster is worth mentioning as it became the basis of other well-known recruitment posters. In July 1914 Eric Field of the Caxton Advertising Agency was approached by high ranking governmental officials and sworn to secrecy, he was told that war was imminent and was contracted to design a visual recruitment strategy. Field created a concept in red, white and blue with the Coat of Arms of George V and the words ‘Your King and Country Need you.’ On 5 August 1914, the day after war was declared, a version of this advertisement appeared in a number of newspapers and was printed as an official poster. 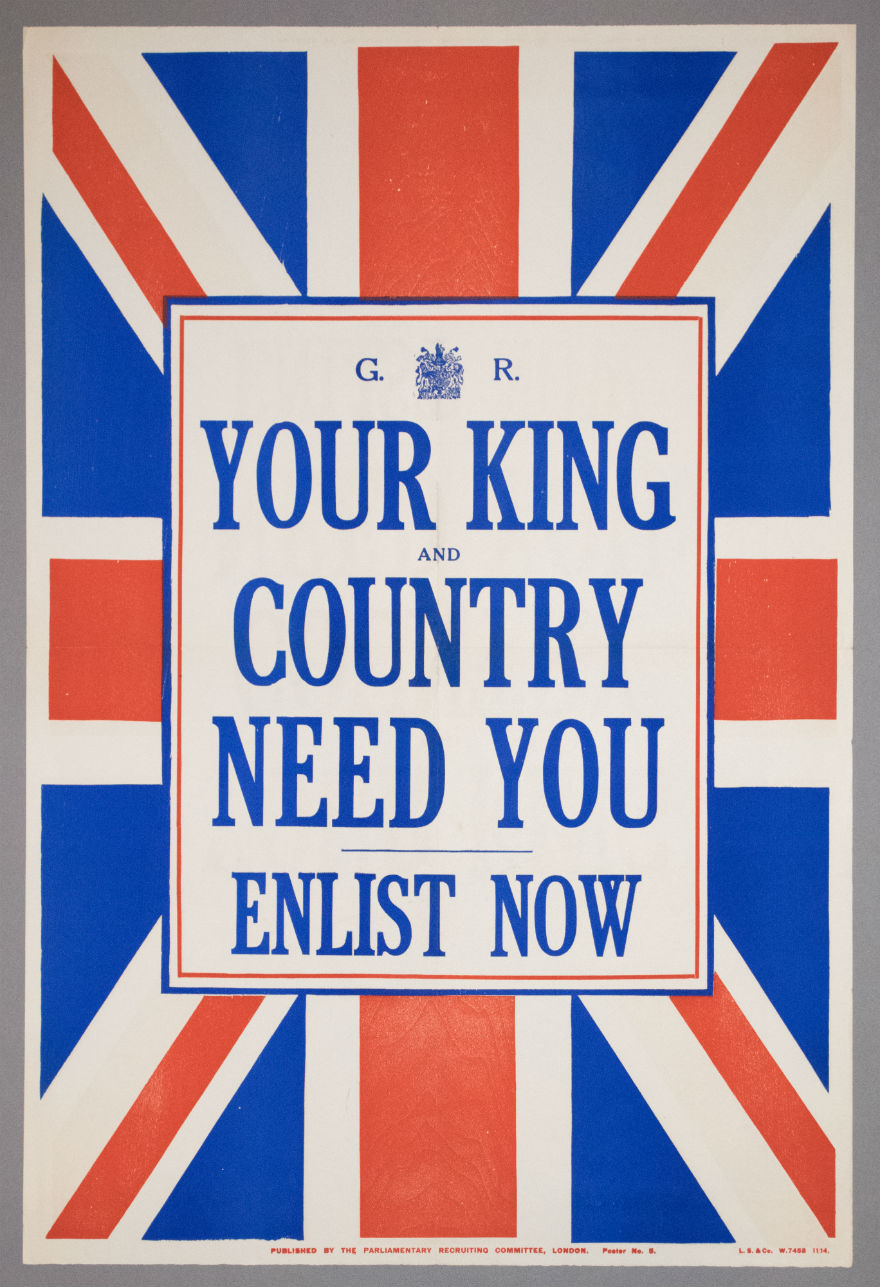 A short time later Alfred Leete, influenced by Field’s text, designed his famous Lord Kitchner ‘Needs You’ image – Kitchner pointing at the viewer with the words ‘Your Country needs you.’[i] A similar poster was then designed featuring  John Redmond pointing and the words ‘Your first duty is to take your part in ending the war.’[ii] In turn, Leete’s design influenced James Montgomery Flagg who, in the summer of 1916 in America produced the iconic ‘Uncle Sam Needs You poster.’[iii] These images appeal purely to a sense of duty to one’s country, a straight forward statement.

The artist Arthur Wardle used the imagery of a pride of lions with the text ‘The Empire needs men!’ This poster printed in 1915 addresses the Commonwealth stating ‘The overseas states all answer the call. Helped by the young lions the old lion defies his foes. Enlist now.’ Wardle mainly painted animal subjects and spent many hours sketching animals at London Zoo. In this image the old lion standing on the rock represents Britain and the young lions behind represent the countries of the Commonwealth. 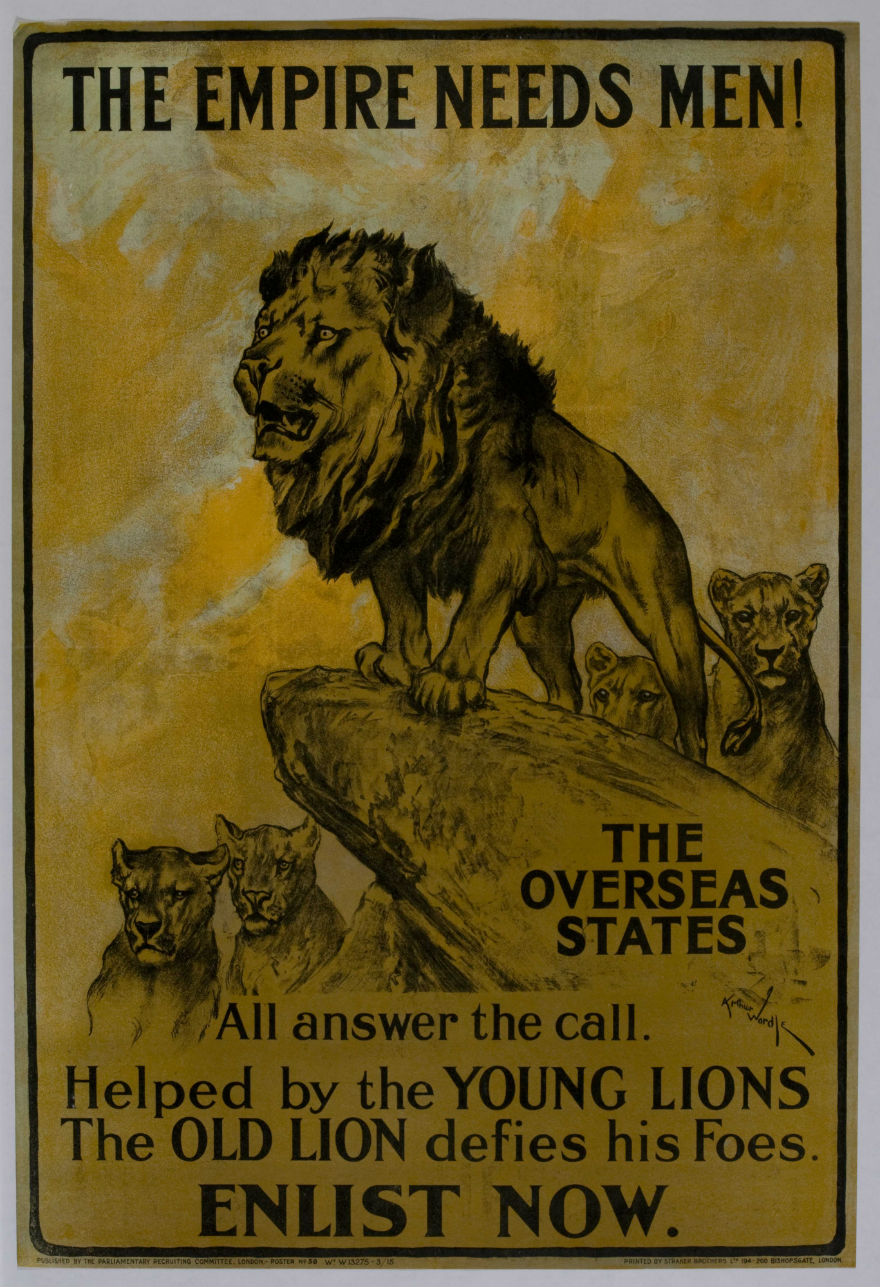 Stories of the horrors of war and the desperate conditions of the trenches arrived back from the battlefields. Poster campaigns attempted to counteract this by communicating a positive spin on life in the army. An example of this approach is seen below. This poster features a happy smiling soldier, his cap at a jaunty angle, with the words ‘Come along boys! Enlist today!' 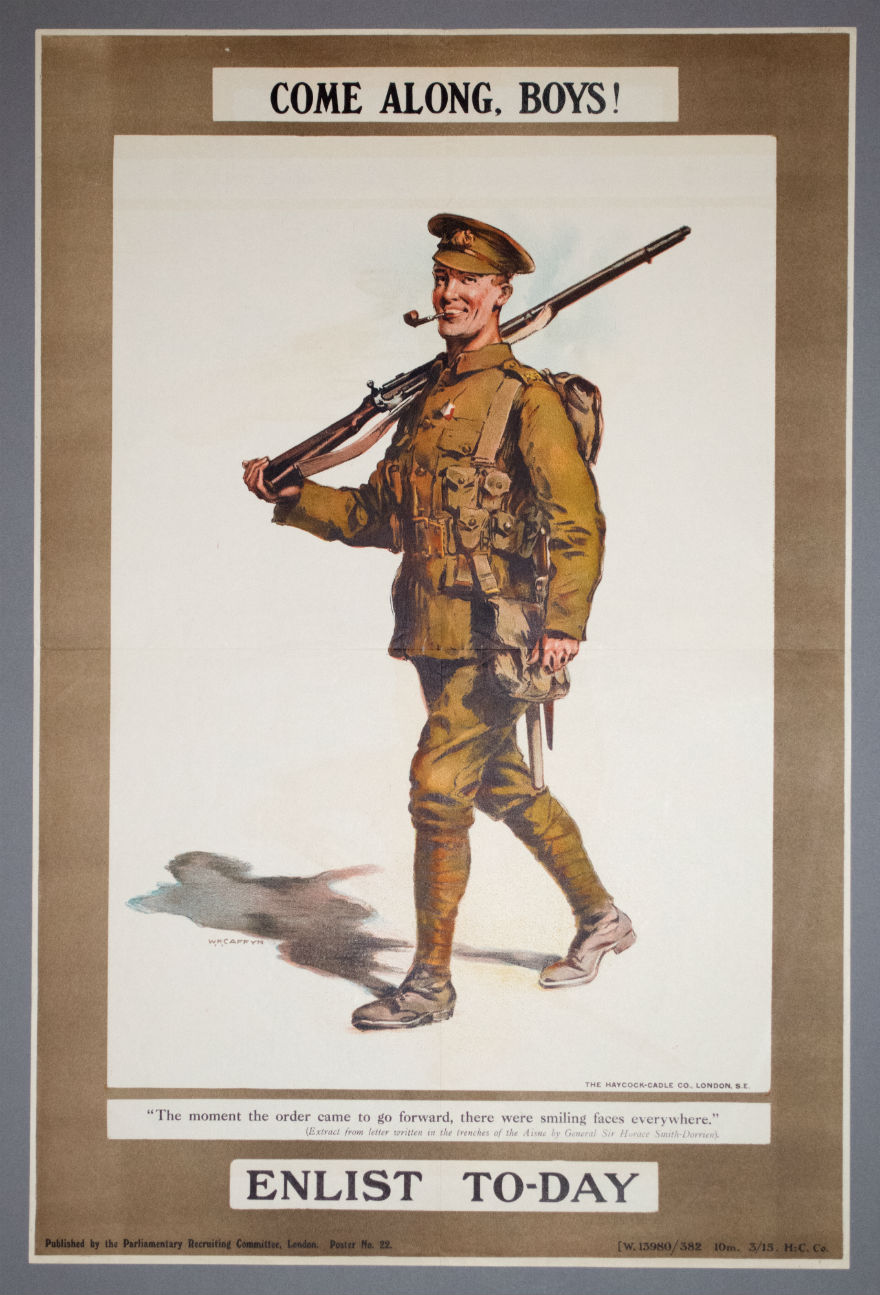 The poster below has the same sentiment, it depicts a group of Highland soldiers laughing and smiling as they march in unison. This image portrays happy soldiers and a sense of comradery and adventure – heading off for adventure with your pals. 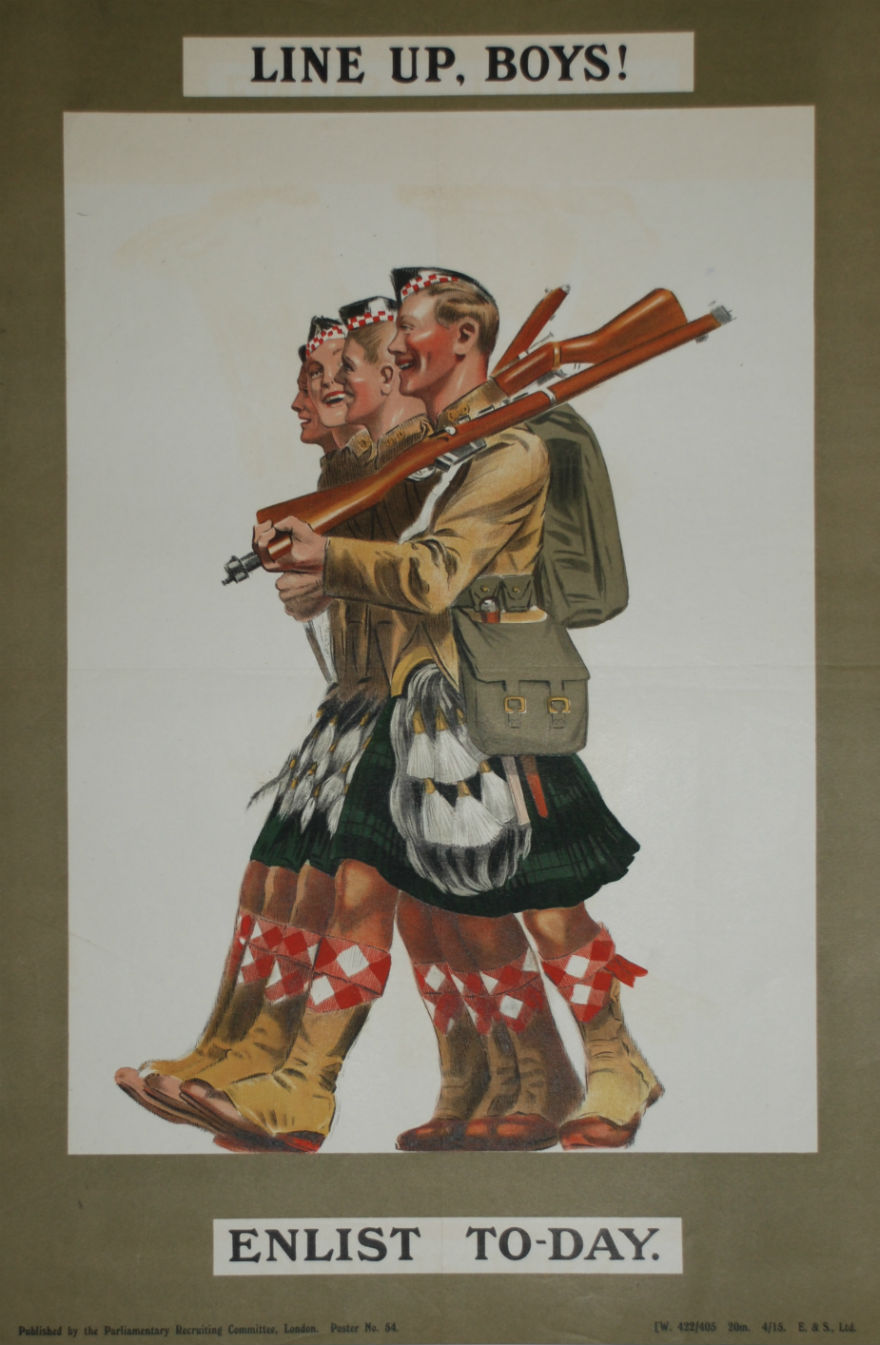 The idea of joining the army as an adventure is also seen in an interesting pamphlet I recently came across in our pamphlet collection. Entitled Ireland’s Cause it is printed in both English and Irish and was probably published by the Parliamentary Recruitment Committee. It portrays a positive, attractive view of the army life. It begins by telling the reader the first rule of the Army is to give every man three meals a day ‘it would be hard to beat the stews and pies which form the principle portion of Tommy’s daily menu.’ The pamphlet is illustrated with scenes of men playing football, fencing and boxing. It includes extracts from a speech given by Redmond who had recently visited the front:

‘I met every Irish regiment at the front ... they marched by, most of them with green flags flying and the Irish war-pipes playing our national airs. ... all they ask of Ireland is that Ireland should stand by them; and I say that there is not a man in the Irish regiments at the front who would not feel humiliated, deserted, and betrayed if those Irish regiments had to rely on Englishmen, Scotchmen, or Welshman to fill gaps in their ranks.’

His words play on a sense of duty and also a sense of Irishness, he is making clear that the British Army has distinct regiments. It is interesting as a piece of propaganda and the fact that it is aimed at Irish speakers. 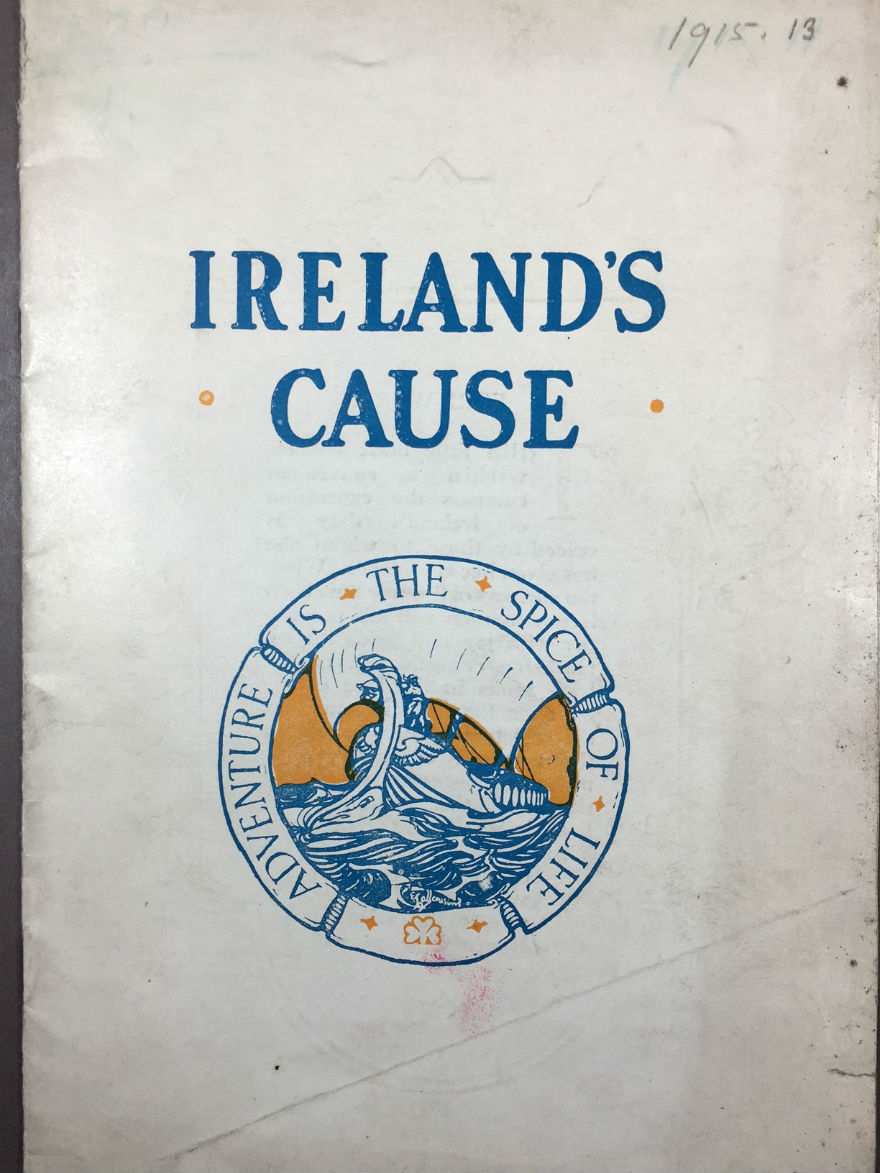 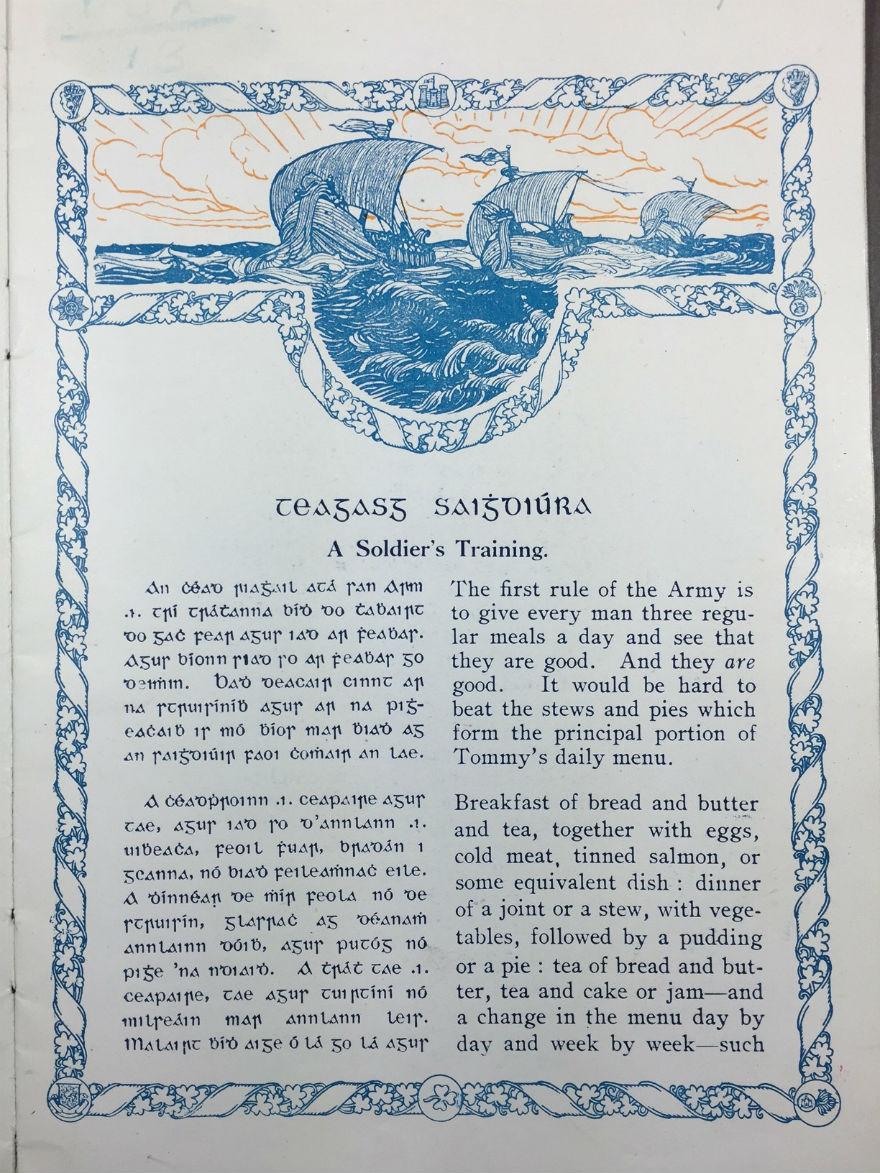 According to a small article in the Waterford News from 1916, this bilingual pamphlet was sent out to all households in Waterford. The author of the article ('Gossip by a Gaelic Leaguer: Irish for Recruits') seems unconvinced by its content:

'Waterford householders have received copies of a bi-lingual booklet, entitled “Ireland’s Cause”, which has been published by the Recruiting Department in Ireland. There is a description in idiomatic Irish of how Tommy is fed and trained when on active service, together with some of Mr. Redmond’s experiences at the front.’ (Waterford News, Friday February 25 1916, p.6).

The poster below shows a figure of a young boy in a scout's uniform looking up at his father with the question 'Father – what did you do to help Britain fight for freedom in 1915?' In this poster the viewer is forced to look at his sense of duty, his role as a father and a man – how he will be seen by others particularly his son. Another version of this poster was published for the Irish market, with ‘Ireland’ substituted for ‘Britain’ in the text.[iv] 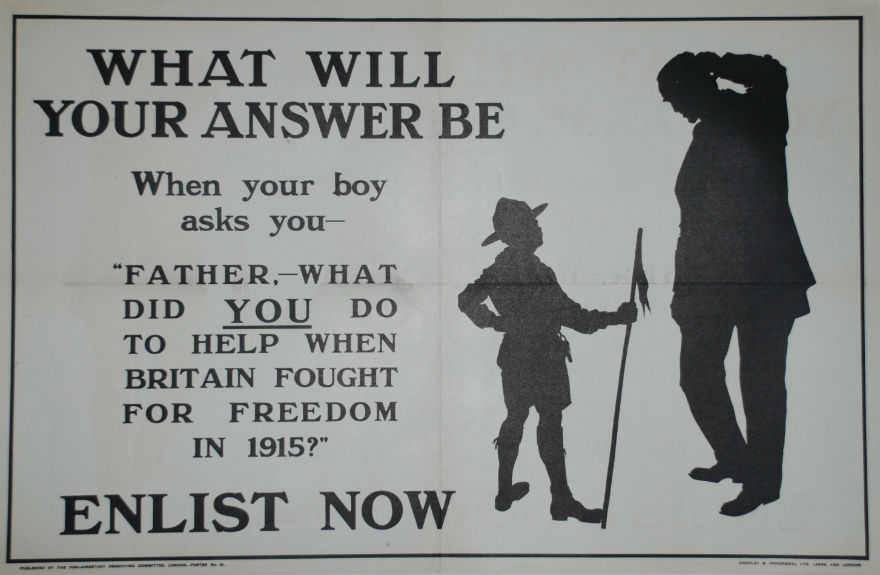 In a similar vein, the poster below forces the viewer to think of how he will be perceived if he doesn’t sign up – it asks the question, if you don’t sign up ‘What will your pals think of you?’ 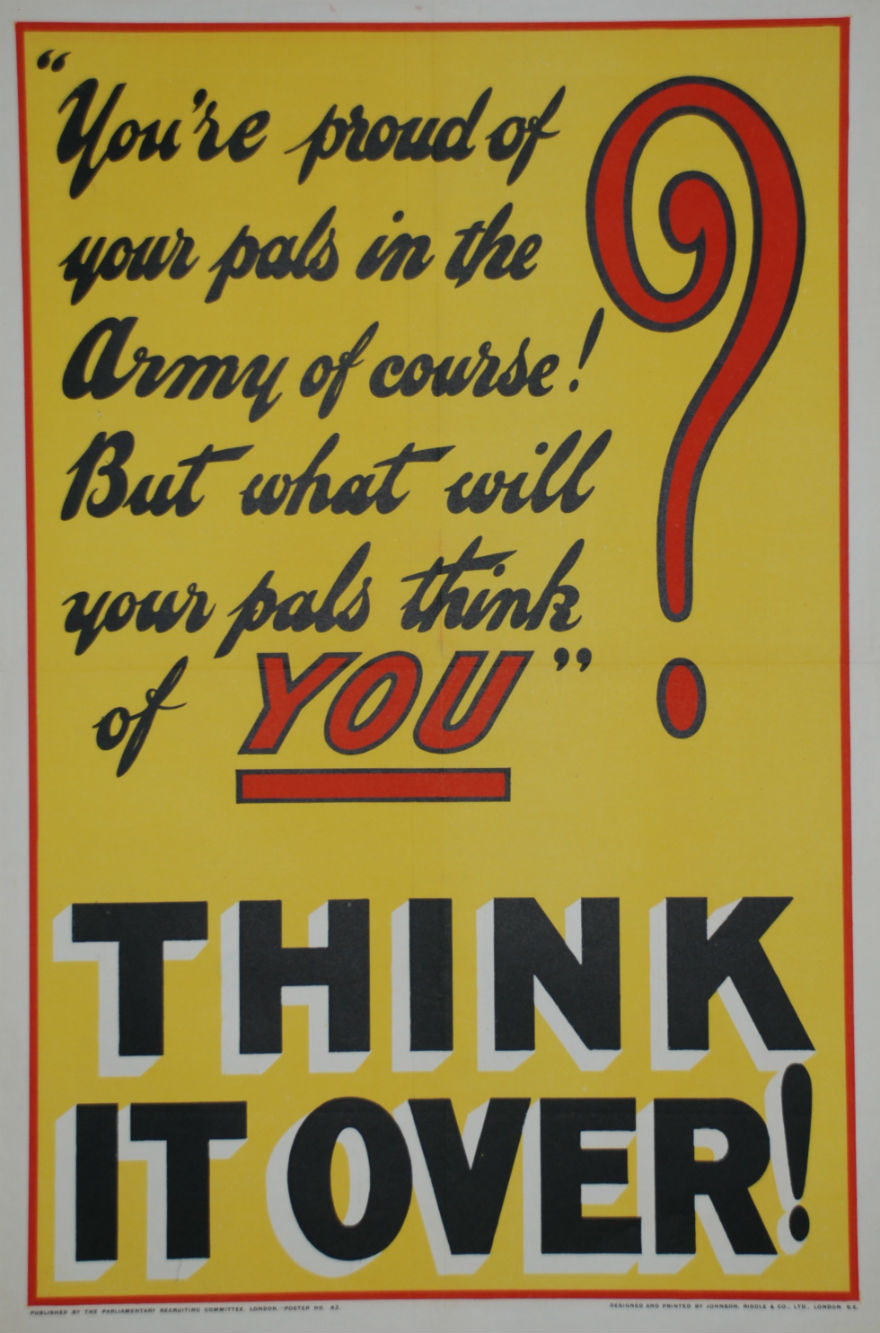 The one poster in the collection printed in Dublin and aimed directly at Irishmen attempts to force the viewer to think of how he will be perceived if he does not join the army and fight. The poster plays on a sense of guilt asking the question ‘Can you meet the eyes of soldiers? Or have you to turn away?’ 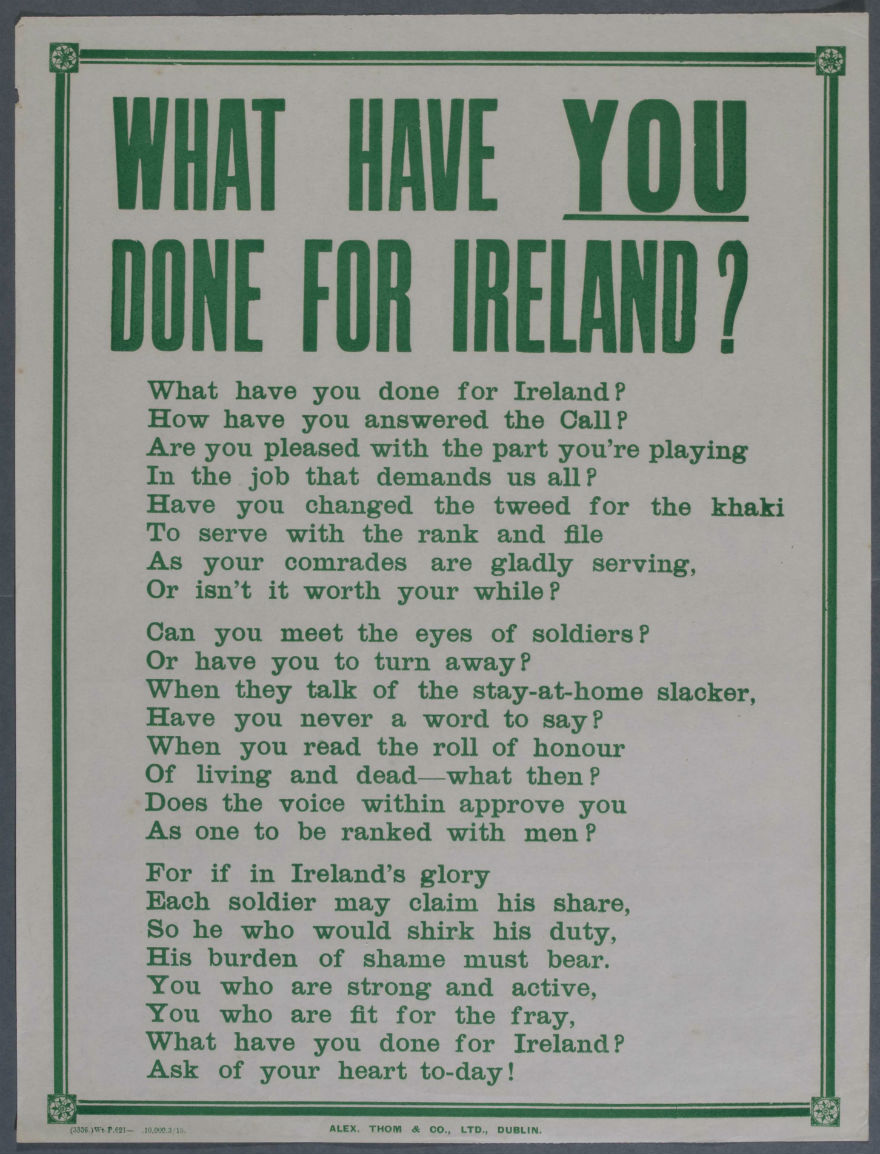 The poster below urges the viewer to ‘Remember Belgium.’ The German invasion of Belgium resulted in the deaths of over 6,000 civilians and  was referred to as the ‘German atrocities'. The poster depicts a soldier standing in the foreground and a woman and child fleeing from a burning village in the background. What is the viewer being asked to do here -  To stand up for what is right? To join the army to protect women and children? To be a man? 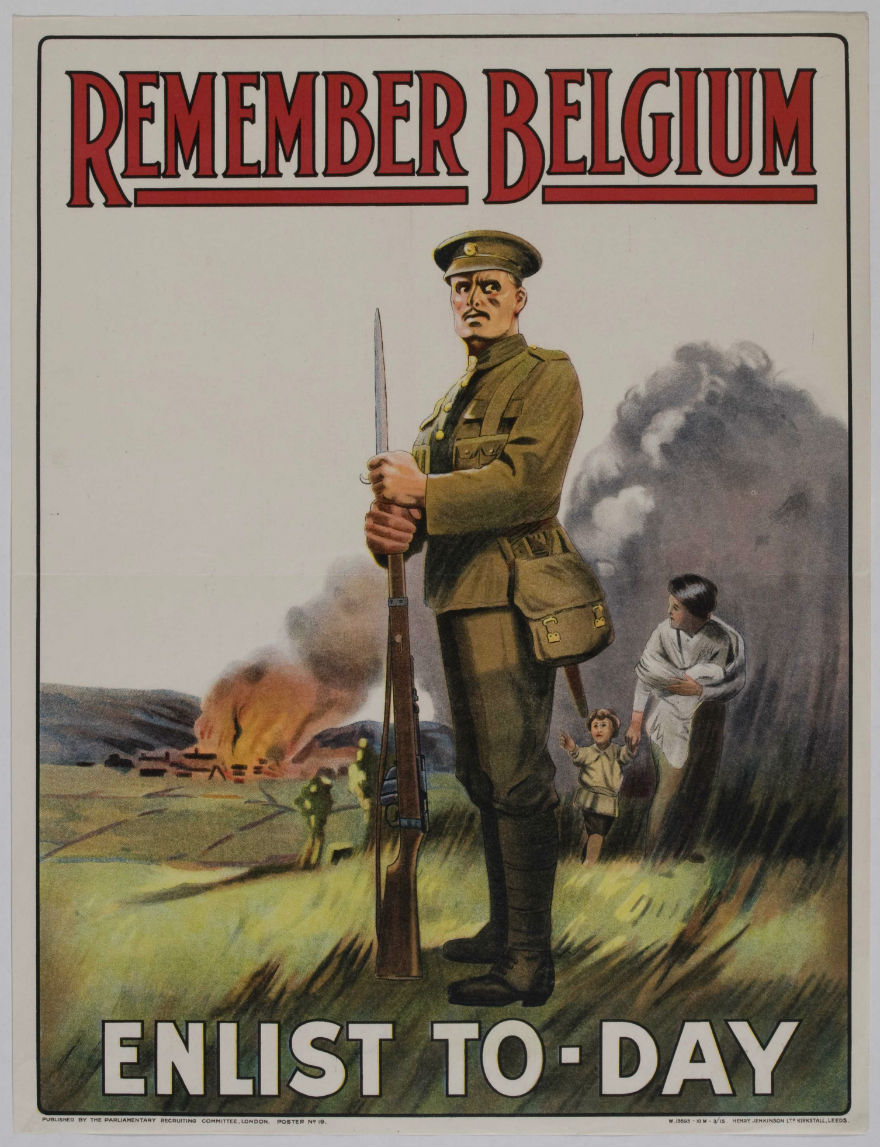 We can see through this collection the range of emotional, practical and patriotic ways men were called to arms. The collection also includes posters aimed at people not eligible for recruitment, asking  - ‘If you cannot join the army - try & get a recruit’, ‘To the women of Britain ... won't you help and send a man to join the army to-day.’ Whether it was for political reasons, a sense of adventure, a sense of duty or purely for financial reasons, thousands of Irishmen did enlist and thousands were killed or wounded on the battlefields of WWI.

Detailed records of the Library’s WWI Posters are available on our Prints and Drawings Catalogue.

Department of the Taoiseach, ‘Irish Soldiers in the Battle of the Somme’ http://www.taoiseach.gov.ie/eng/Historical_Information/1916_Commemorations/Irish_Soldiers_in_the_Battle_of_the_Somme.html