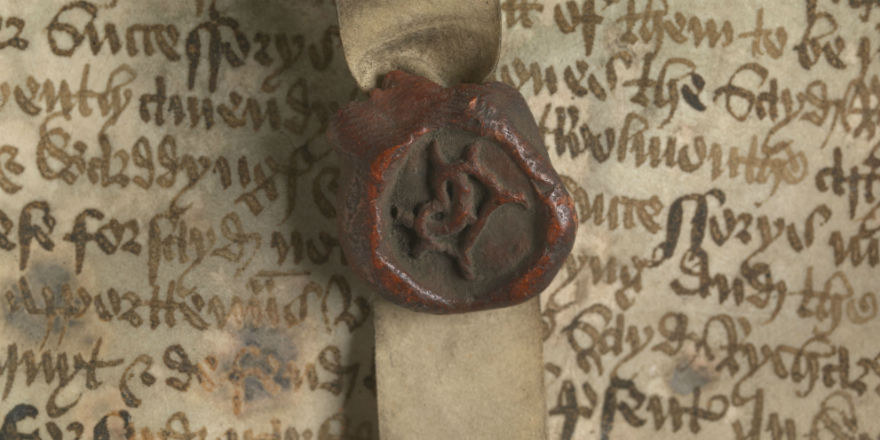 The Haliday collection holds over 200 documents from the Guild of St. Anne; a selection are currently on display as part of the Library's exhibition 'Dublin Documents: highlights from Charles Haliday's manuscript collection'.

To accompany the exhibition Professor Colm Lennon, MRIA, will give a talk at Academy House on 1 March, 2017 at 13:00 ‘Charitable property: the manuscripts of St Anne's Guild, Dublin’. Free admission, no booking required.

The Guild of St Anne was a powerful and influential Catholic body defended by the lawyer Henry Burnell. Read the DIB entry on Burnell, by Terry Clavin and Judy Barry, below.

Burnell, Henry (d. 1614), lawyer, was the son of John Burnell of Castleknock, Co. Dublin; the family also owned land at Balgriffin, Co. Dublin, and had strong connections with the city of Dublin, principally through Sir Robert Burnell, who was mayor on several occasions in the fifteenth century. Henry entered Lincoln's Inn in London to study law in May 1561. In March 1562, he was among a group of Irish law students who presented a statement of grievances to the privy council in London protesting at the oppressive behaviour of the royal soldiers billeted on the Pale. They were admonished for their impertinence and spent a short spell in the Fleet prison. Nevertheless, the lord lieutenant, Thomas Radcliffe (qv), earl of Sussex, was compelled to reply to each of their charges in detail and to give assurances that all genuine grievances would be carefully examined.

After returning to Ireland, Burnell practised law and gained a reputation as one of the best speakers of his day in Ireland. In 1573, he was appointed recorder of the city of Dublin, and he appears to have had a room at King's Inns. He became legal adviser to Gerald Fitzgerald (qv), 11th earl of Kildare, who was arrested on suspicion of treason in spring 1575. Burnell played a key role in frustrating the crown's efforts to gather enough evidence to convict Kildare by enjoining potential prosecution witnesses not to betray their fellow Irishman to the English authorities. In early May, he abruptly resigned as recorder of Dublin and departed for England without licence where he was arrested in July on suspicion of involvement in Kildare's alleged treason. The lord deputy, Sir William Fitzwilliam (qv), described him as being very learned in the law, devoted to Kildare and a staunch catholic. He was still imprisoned in the Fleet in London in January 1576, but was free by September.

In 1576, the lord deputy, Sir Henry Sidney (qv), proposed commuting the crown's traditional prerogative right to levy military exactions on the Pale, known as the cess, in return for a guaranteed annual subsidy. The cess had long been deeply unpopular within the Pale, but the proposal to convert it into a permanent tax caused outrage and sparked a campaign of civil disobedience. In early 1577, Burnell defended a number of noblemen who claimed that their lands were exempted from the cess by ‘freedoms’ granted by the crown in the past. Sidney did not recognise these freedoms and prosecuted them. Burnell and another lawyer, Barnaby Scurlock, argued in court that by statute of 27 Hen. VIII grants of freedom from the cess remained in force and that all laws regulating purveyances in England applied in Ireland. More fundamentally, they claimed that while the cess was formerly an infrequent financial expedient used in times of emergency, it had in recent times evolved into a regular form of taxation which thereby required the consent of the community. This consent could only be provided by an Irish parliament or by a great council comprising the leading nobles of the Pale.

Lengthy constitutional debates, both formal and informal, with government officials failed to achieve any common ground. Along with Scurlock and Richard Netterville (qv), Burnell had been granted plenipotentiary powers by the Pale landowners to present their case at court and to negotiate on their behalf. Despite being denied permission by Sidney to go to London they did so regardless in February 1577. To travel to court without permission and to question the official interpretation of the queen's prerogative was a serious course of action and the three were imprisoned for their audacity in May, first in the Fleet and then in the Tower. The queen was infuriated and saw clearly that they sought in practice to abolish her prerogative right to cess. However, the opposition within the Pale remained resolute and the government began moving towards a compromise settlement, which would preserve its credibility. The three incarcerated representatives shrewdly stressed the misery caused by the cess as it was put into practice and desisted from decrying the crown's right to levy cess in principle. In spring 1578, the queen ordered the release of Burnell and his two colleagues and dispatched them to Dublin to present their proposals. Finally in September a provisional agreement was reached whereby the Pale agreed to pay £2000 annually, any increase in the figure being subject to the consent of the Pale community. Burnell and Netterville made it clear that this agreement did not constitute an acceptance of the cess as a permanent financial levy and that the issue could only be properly resolved in an Irish parliament. This agreement was widely interpreted as a victory for the opposition, particularly as the queen also dismissed Sidney as lord deputy – thereby consolidating the position of Burnell and Netterville as the chief representatives of the Palesmen. 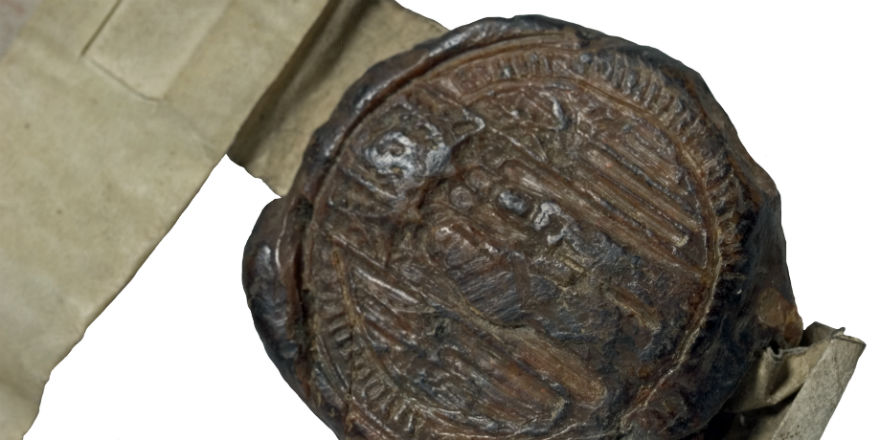 They continued to negotiate on behalf of the Pale with Sidney's successor, Sir William Drury (qv), and their views remained decisive in determining the country's attitude towards subsequent government requests that the Pale provide for the royal army. Rebellions in Leinster and Munster in 1579–80 allowed the government to re-impose the cess; Burnell appears to have been imprisoned in London for a time in 1580 and to have kept a low profile for two years. The initiative swung back towards the opposition after the dismissal of the autocratic lord deputy Arthur Grey (qv) in summer 1582. In spring 1583, Burnell went to London to protest on behalf of the families of landowners within the Pale who had been executed by Grey. During this time he enjoyed the support of the moderate royal official Sir Nicholas White (qv) and of White's patron Thomas Butler (qv), earl of Ormond. Elected as MP for county Dublin in the 1585–86 Irish parliament, he played a leading role in the parliamentary opposition that frustrated the lord deputy Sir John Perrot's (qv) efforts to reach a settlement regarding the cess. In 1590 he was appointed a justice of the queen's bench for one term only; a mark of his outstanding abilities, given his role as a prominent government critic. As late as 1605, he was a representative of the Pale in negotiations with the government regarding the cess.

From 1593, Burnell was engaged to defend the rights and liberties of the Guild of St Anne in the face of government inquiries. The guild controlled large amounts of property and included in its membership some of the wealthiest and most influential members of the Dublin corporation, many of whom were leading recusants. The government suspected that the guild was using some of its resources to maintain catholic clergy but, despite repeated attempts, failed to penetrate its workings due to the stout resistance provided by Burnell and other lawyers.

When in 1605 the lord deputy, Sir Arthur Chichester (qv), embarked on a vigorous campaign for the repression of leading Dublin recusants, Burnell, Netterville and Sir Patrick Barnewall (qv) drew up a petition protesting against the execution of Chichester's policy. These three, together with Viscount Gormanston (qv) who presented the petition, were brought before the Irish council and, after arguing their case before Chichester, were ordered to prison pending a trial in the court of castle chamber. Burnell was not imprisoned on account of his age and infirmity, being put under house arrest at first, but after he openly refused to remain confined to his house, he was put under restraint at Dublin in the house of the sergeant-at-arms.

In February 1600, he was found guilty in the court of castle chamber of illegally tampering with the will of his former patron, the 11th earl of Kildare, who had died in 1585. This forgery occurred after Kildare's death and was designed to provide the 11th earl's widow, countess Mabel, with a more generous jointure. Burnell was fined 500 marks. Two other complaints were also made against him, the first concerning land belonging to the 11th earl, which he and Netterville were said to have undervalued and later purchased for themselves, and the second brought in 1608 by Chichester, who reported that the rent on the earl of Ormond's patent for prize wines had been retained illegally by Burnell. There is no record of charges being preferred on either of these accusations.

Burnell died at his house at Castleknock in 1614, a very old man but with his mind and memory unimpaired. In his will he made careful bequests of his money and belongings, mentioning his horse, his best gown and cloak, and his broadcloth gown. His wife, an O'Reilly of Cavan, had died in 1605, and a son, Christopher, survived him alone of his children. He asked to be buried with his parents in the old church of Castleknock, where a chapel, which must have been built by him, was known for centuries as Burnell's chapel.

Wishing all our members and friends a very Happy Christmas and New Year.