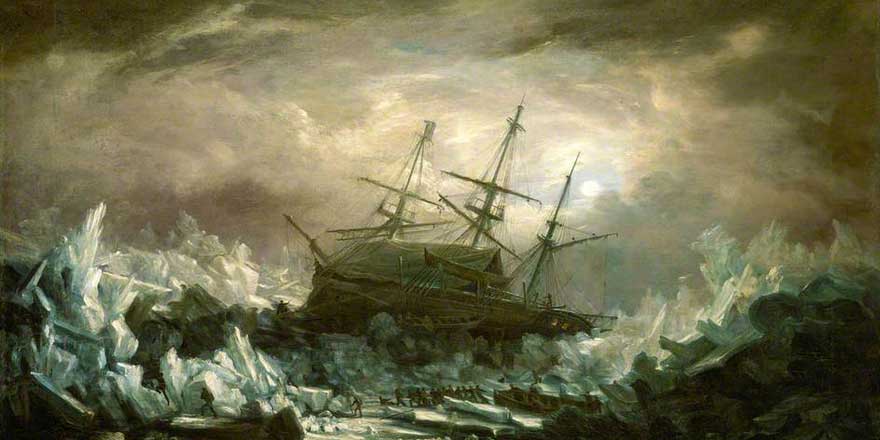 The DIB in the news: Discovery of HMS Terror

Recently, one of the greatest prizes in marine archaeology – HMS Terror – was located in Terror Bay, south of King William Island, Nunavut, Canada.

The second of the two ships that carried Sir John Franklin’s expedition to chart the North West Passage in 1845, the ship was filmed 11 September 2016 by the Arctic Research Foundation.

Francis Leopold McClintock (1819–1907) went on four Arctic expeditions searching for Franklin’s missing expedition. Dr David Murphy notes McClintock “perfected methods of travelling by sled and was, by 1854, one of the most experienced Arctic explorers in the Royal Navy”. Urged by Franklin’s widow to continue the hunt for news of the expedition, McClintock traversed Baffin Bay and Prince Regent Sound (1858) and interviewed Inuit (1859) who directed him to King William Island, where remains of Franklin’s party were found. McClintock returned to England to confirm the entire Franklin expedition had been lost. After a prominent literary and naval career, McClintock remained a “recognised authority on polar exploration and was consulted by Capt. Robert Falcon Scott before the Discovery expedition of 1901–4”.

Read the full Dictionary of Irish Biography entry below, by Dr David Murphy

McClintock, Sir Francis Leopold (1819–1907), Royal Naval officer and Arctic explorer, was born 8 July 1819 at 1 Seatown Place, Dundalk, Co. Louth, eldest surviving son of Henry McClintock, collector of customs in Dundalk and formerly an officer in the 3rd Dragoon Guards, and his wife Elizabeth Melesina, daughter of the Ven. George Fleury, DD, archdeacon of Waterford. His father's family was descended from Alexander McClintock of Argyllshire, Scotland, who purchased the estate of Trintagh, Co. Donegal, in 1597. He was educated at the school of the Rev. John Darley in Dundalk and entered the Royal Navy (1831) as a first-class volunteer, passing as a warrant officer in October 1838. In July 1845 he was commissioned as a lieutenant, and initially served aboard HMS Gorgon, on the South American station, and later HMS Frolic in the Pacific.

His career in polar exploration began in February 1848, when he transferred to HMS Enterprise and accompanied Capt. Sir James Clark Ross on an expedition to the Arctic. During the course of his naval career he went on four Arctic expeditions, all of which were to search for the missing expedition of Sir John Franklin. In February 1850 he was appointed as first lieutenant of HMS Assistance and, when this ship was beset by ice in the winter of 1850–51, he made an epic sled journey across Griffith Island, travelling 760 miles (1,220 km) in eighty days. On his return home (October 1851) he was promoted to commander, and in February 1852 was appointed to command HMS Intrepid in Capt. Sir Edward Belcher's Arctic expedition. During the winter of 1852 he set up base on the south side of Melville Island and his crew undertook several sledge expeditions. On one such expedition he travelled 1,368 miles (2,200 km) in 106 days. Belcher's expedition was, however, beset by difficulties, and in August 1854 Intrepid and three other ships were abandoned and the party returned to England in relief ships. On his return, McClintock was promoted to captain (21 October 1854). During these expeditions he had perfected methods of travelling by sled and was, by 1854, one of the most experienced Arctic explorers in the Royal Navy.

Lady Franklin, the wife of Sir John Franklin who, along with his second-in-command, Capt. Francis R. M. Crozier (qv), and the crews of two ships, had disappeared in the Arctic while searching for a north-west passage, asked McClintock for assistance. In April 1857 he took command of the Fox, a yacht purchased by Lady Franklin, and planned to travel to the Arctic in order to find some definite information regarding the fate of Franklin's party. Following a difficult passage through Baffin Bay, he sailed down Prince Regent Sound in 1858 and spent the remainder of the season negotiating his way through Bellot Strait. In 1859 he interviewed Inuits who told him of a shipwreck on King William Island and of seeing survivors of Franklin's expedition travelling south. He began to explore the island and on 25 May 1859 found the remains of one of Franklin's party. During the next few months he found further bodies and discarded equipment. Another of the expedition's officers, Lt. William R. Hobson, found a message that had been left by Franklin's party in a stone cairn on King William Island. In August 1859 McClintock set sail for England, returning with the news that the members of the Franklin expedition had all perished in the Arctic. He described his experiences in The voyage of the “Fox” in the Arctic Seas: a narrative of the fate of Sir John Franklin and his companions (London, 1859). The book was an immediate success, ran to several editions, and was translated into various languages. In 1859 he received the freedom of the City of London, and in 1860 was knighted. He also received an honorary doctorate from the University of Dublin, and the corporations of Dundalk and Dublin presented him with illuminated addresses.

He subsequently served as commodore at Jamaica (1865–8) and as naval ADC to Queen Victoria (1868–71) and was promoted to rear-admiral (1 October 1871). He also had a brief, and disastrous, political career. In the 1868 general election he stood as the tory candidate for Drogheda but lost amid scenes of serious electoral rioting in which one man was killed. He later lodged a petition protesting against the result of the election, but did not stand as a candidate in the new election that was sanctioned.

Appointed as admiral superintendent of Portsmouth dockyard (April 1872–May 1877), he supervised the equipping of the Nares Arctic expedition in 1875. On 5 August 1877 he was promoted to vice-admiral, and in November 1879 was appointed commander-in-chief of the North American and West Indies station (1879–82). Elected an elder brother of Trinity House in February 1884, he was promoted to admiral in July 1884, retiring in the same month. In 1891 he was created KCB. McClintock remained a recognised authority on polar exploration and was consulted by Capt. Robert Falcon Scott before the Discovery expedition of 1901–4. McClintock died in London on 17 November 1907 and was buried in the Kensington cemetery, Hanwell. A memorial plaque was later unveiled in Westminster abbey, and another at his birthplace in Dundalk. There are two portraits of him, both by Stephen Pearce, in the National Portrait Gallery, London. There is a bust by Joseph Robinson Kirk (qv) in the RDS and another bust by McClintock's daughter, Anna McClintock, in St Ann's church, Portsmouth. McClintock Channel, McClintock Cape, and McClintock Point were named in his honour.

While he is usually remembered for his connection with the Franklin expedition, his Arctic career was of much wider significance. He developed totally new methods of sledge travelling and later served as an inspiration for explorers such as Ernest Shackleton (qv), Scott, and Amundsen. He experimented with photographic equipment during his expeditions and also collected a vast number of zoological and fossil specimens, many of which are held in the Natural History Museum in Dublin. He donated a small collection of Inuit material to the National Museum of Ireland. There are collections of his papers in the NLI and the Royal Geographical Society. The most significant collection is held in the Scott Polar Research Institute in Cambridge. 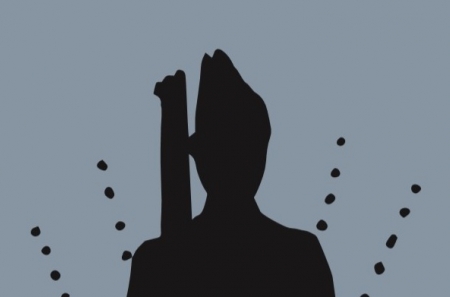 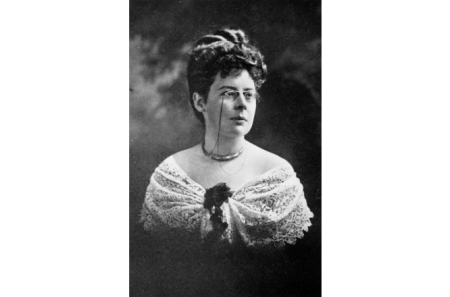