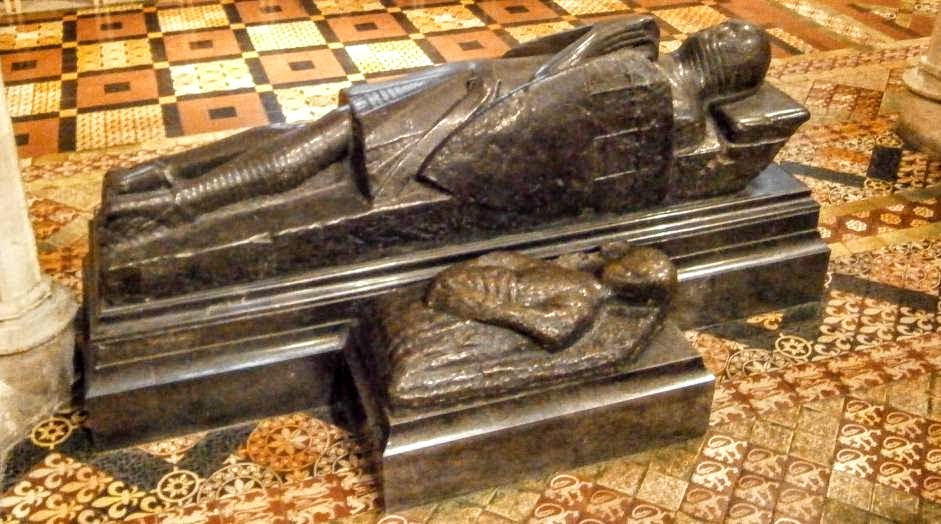 DIB entry of the day: Aífe

To mark the 850th anniversary of the beginning of the Anglo-Norman invasion of Ireland we are publishing the biographies of key figures associated with this pivotal event in Irish history.Today's entry is that of his wife Aífe (Aoife, Eva) by Maire Therese Flanagan.

Aífe (Aoife, Eva) (fl. c.1153–1189) was the daughter of Diarmait Mac Murchada (d. 1171), king of Leinster, and of his wife Mór, daughter of Muirchertach Ua Tuathail, king of Uí Muiredaig, and half-sister of Lorcán Ua Tuathail, archbishop of Dublin. It is likely that Diarmait married Mór in or around 1153, in which case Aífe would had been about seventeen years of age when she became the wife of Richard fitz Gilbert (Richard de Clare), lord of Strigoil and earl of Pembroke (1148–54), otherwise known as Strongbow.

The marriage took place almost immediately following the capture of the city of Waterford (August 1170). The Anglo-Norman apologist Gerald of Wales claimed that, in order to entice Strongbow to Ireland, Diarmait had promised him succession to the kingship of Leinster along with his marriage to Aífe. Though it cannot be corroborated by independent evidence, that was certainly the outcome of the marriage. Between August 1170 and Strongbow's death (April 1176) Aífe gave birth to a son, Gilbert, and a daughter, Isabella (Isabella Marshal), both children being given stock names of Strongbow's family.

What happened to Aífe after Strongbow's death is obscure. Most unusually, as a young widow whose husband had extensive estates in England, Wales and Normandy, in addition to his acquisitions in Leinster, and whose marriage was now in the gift of King Henry II, she was not remarried. For the duration of her life Aífe was entitled to the income of one-third of her husband's demesne estates; that she did enjoy them is evidenced by mentions of her on a number of occasions between 1176 and 1189 in English royal records, where she is styled ‘the Irish countess’ and ‘countess of Strigoil’.

In 1183–4 she was granted an advance of £20 from the king to support herself in the Welsh march, suggesting that she was at that time residing in Chepstow castle. As the Welsh were attacking Glamorgan in that year, Chepstow may have been considered to be in danger of falling into Welsh hands. The payment suggests that she had responsibility for its defence: when a royal custodian was assigned to the castle from 1184 onwards, the annual sum allocated to him was £20. In 1185 a listing of the widows, minors and heiresses in the gift of King Henry recorded ‘the Irish countess’ in enjoyment of demesne manors in Weston (Hertfordshire) and Chesterford (Essex). Styled comitissa Hibernensis, Aífe issued a charter in favour of a Benedictine nunnery at Ickleton (Cambridgeshire), while in a confirmation for John Cumin, archbishop of Dublin, of lands held in Leinster, she used the title ‘Countess Eva, heir of King Diarmait’.

The date of Aífe's death is unknown, but she was buried in Tintern Abbey, Monmouthshire, alongside her father-in-law, Gilbert fitz Gilbert. Her son Gilbert, who was twelve years old in 1185, died sometime after that date. In 1189 her daughter Isabella, now Strongbow's heir, was promised in marriage by King Henry to William Marshal (d. 1219). Once Strongbow's estates were assumed by William Marshal in right of his wife, Aífe's opportunities for independent action would have been severely curtailed. That she had not been remarried up to that date and had issued her own charters in which she described herself as her father's heir suggests that she may have been a strong personality in her own right. If Strongbow gained lands in Leinster in right of his wife, Aífe certainly managed to exploit his estates in England and south Wales. In a noted historical painting by Daniel Maclise (1806–70), depicting her marriage to Strongbow, she is portrayed as a downcast young girl, symbolically representing Ireland, being reluctantly wed, under the authority of her father King Diarmait, to an overbearing conqueror.