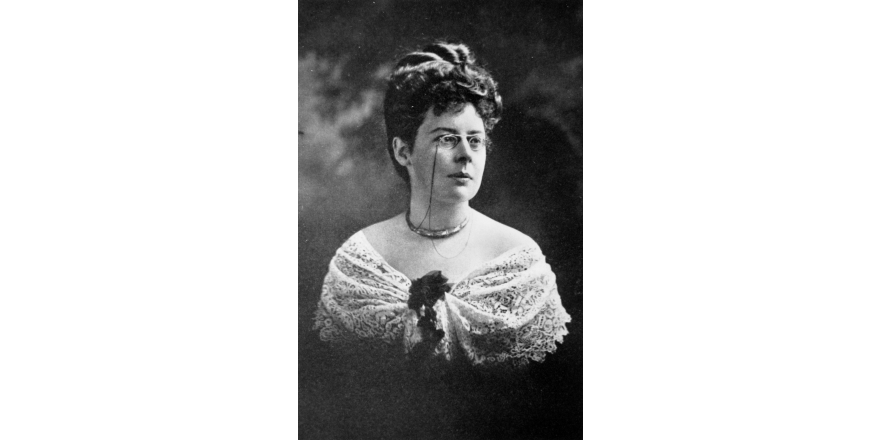 The last explorer in our series is Beatrice Ethel Grimshaw, who started her career as a sports journalist and long-distance cyclist before travelling extensively in the South Seas and Australasia and settling in Papua New Guinea to write exotic novels and grow tobacco.

Grimshaw, Beatrice Ethel (1870–1953), author and traveller, was born 3 February 1870 at Cloona House, Dunmurry, Co. Antrim, fourth child among two sons and four daughters of Nicholas William Grimshaw of Belfast, former director of the Ulster Spinning Company turned wine-and-oil merchant, and Eleanor Grimshaw (née Newsam) of Cork. She was educated at the Pension Rétaillaud in Caen; Victoria College, Belfast; Bedford College, London; and QCB (1890–91). Bright, athletic, and adventurous, Grimshaw was fired by a sense of her own unconventionality. Flouting expectations that she marry and reproduce, or teach classics in a ladies' college, she escaped to Dublin, finding work as a sporting journalist on R. J. Mecredy's Irish Cyclist. Soon promoted to sub-editor, she dedicated her spare time to vigorous cycling: taking 100-mile spins and riding a record 210 miles (338 km) in a 24-hour marathon.

In 1893 she converted to catholicism. That same year she joined Mecredy's new venture, the Social Review, a social and literary weekly, eventually wresting the editorship away from a rival in 1895. Writing under a variety of pen-names, Grimshaw turned out copy by the yard, tackling topical matters, books, the arts, and employment for women, and using the Review as an outlet for her creative work – poems, dialogues, short stories, and two serialised novels. ‘Broken away’ (1895–6; published in book form 1897) and ‘A fool of forty’ (1898–9) portray Grimshaw's own circle, while casting a jaundiced eye on marriage.

Leaving Dublin for London in 1899, Grimshaw spent a while ‘among the newspapers’, then worked as a publicist in Liverpool for the Cunard Line. By 1903 she succeeded in wangling steamship passes to the South Seas in exchange for press coverage. Working as publicist and writer, Grimshaw remained in the Pacific for two-and-a-half years, travelling widely and publishing three books based on her travels. From Fiji to the Cannibal Islands (1907) and In the strange South Seas (1907), both illustrated with her own photographs, are zesty travelogues of colour, anecdote, and information. The third book, Vaiti of the islands (1907), concerns itself with the fictional adventures of an irresistible heroine. The picara, Vaiti, a half-caste who takes exactly what she wants out of a man's world, seems to reflect Grimshaw's own extravagant delight in her new-found freedom.

Grimshaw was dazzled by the light, warmth, and palette of her new world. After a short trip to England and Ireland, she settled in Papua, New Guinea, her base for the next thirty years, and the inspiration for many of her forty volumes (the majority of them fiction). Her stories are mostly about the white settlers – the miners, planters, traders, adventurers, magistrates, and colonial emissaries – and their pursuit of love and money in a pulsating world of exotic scenery and unpredictable natives. The best of Grimshaw's work, including When the red gods call (1911) and Black sheep's gold (1927), deservedly attracted comparison with Joseph Conrad, Bret Harte, Mary Kingsley, and Robert Louis Stevenson. However, literary immortality concerned Grimshaw less than her earnings. She wrote to make money, and brassy concoctions such as The coral queen (1919) and The star in the dust (1930) cater unashamedly to the popular market.

Grimshaw's books, appearing in multiple editions, became best-sellers in Australia, the United States, and England, giving her the wherewithal to pursue her taste for strange experiences. For years at a time she lived in remote houses of her own design, a white woman alone in the bush with hired native workers. She grew tobacco and farmed. As a traveller, the unknown interested her more than anything else. In her fifties, she became the first white woman to venture (in company) up the dangerous Sepik and Fly rivers, experiences that inspired an excellent novel, The Paradise poachers (1928), and reportage in her travelogue Isles of adventure (1930).

In 1936, she retired with her brother Ramsay to Bathurst, Australia, outliving both him and her popularity. She died in poverty and madness from complications of diabetes. Her achievements were catalogued in obituaries in The Times, the New York Times, and other prominent journals. Unfortunately, the bulk of her personal papers have disappeared.

Grimshaw's two Irish novels, together with her Irish journalism, have been forgotten: polished work, which captures the changing lives of women in fin-de-siècle Ireland. In Australasia, Grimshaw's travelogues and tropical fiction are still read for their insights into the lives and preoccupations of the settlers.