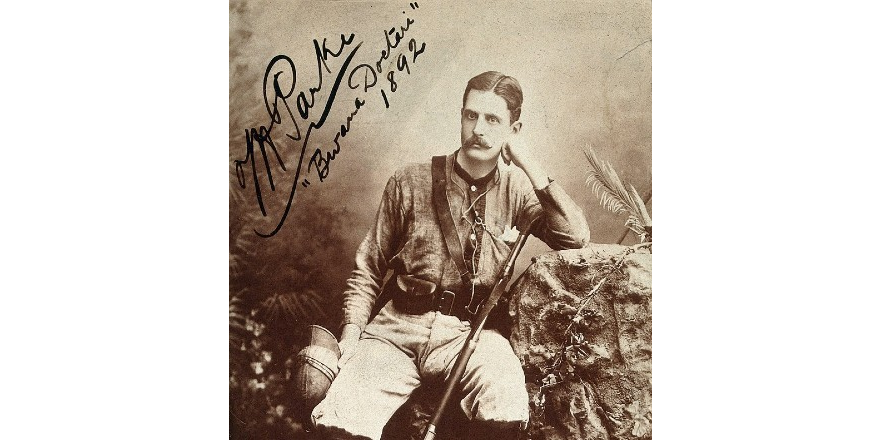 Our series of explorers continues with Thomas Heazle Parke, the first Irishman known to have crossed the continent of Africa. He once saved a man’s life by sucking arrow poison into his own mouth.

Parke, Thomas Heazle (1857–93), army surgeon and African traveller, was born 27 November 1857 at Clogher House, Kilmore, Co. Roscommon, second son among ten children of William Parke, a well-to-do farmer, and Henrietta Parke (née Holmes). His ancestors were of Kentish stock. Educated locally and at the Rev. Edward Power's school in Harrington St., Dublin, he entered the Royal College of Surgeons in Ireland (1875), graduating licentiate of the RCSI (1878) and KQCPI (1879). He worked briefly as dispensary medical officer at Ballybay, Co. Monaghan, and as surgeon to the eastern dispensary at Bath, England. Then, after coaching by his erudite friend Dr John Knott, he passed the army entrance examination, and was gazetted surgeon-captain on 5 February 1881. Physically he was well built and handsome, with a moustache, dark-brown hair, and a frank open countenance.

Parke volunteered for service in Egypt to suppress the Arabi revolt (1882), after which he became senior medical officer at Helouan hospital, near Cairo, during a cholera epidemic in which 60,000 perished. Stationed in Dundalk with the 16th Lancers towards the end of 1883, he again volunteered for active service in the following year, wishing to join the Nile expedition for the relief of Gen. Gordon, besieged at Khartoum by the forces of the Mahdi. He was at Metammeh on 1 February 1884 when a felucca arrived from Khartoum with the news that the city had fallen. A longish stint of service followed based in Alexandria, the tedium of routine duties broken by his involvement as master of the Alexandria Hunt Club. Almost by chance Parke heard in January 1887 that H. M. Stanley was leading a relief party to conduct Emin Pasha, governor of Equatoria, back to civilisation. Not without difficulty, he pieced together the romantic story of Eduard Schnitzer (b. Silesia, 1840), medical doctor, naturalist, polyglot, and wanderer, who had embraced Islam in Egypt. Known since as Dr Emin (‘the faithful one’), he had been called by Gordon to the province of the Equator, where in due course he was beleaguered by the disciples of the Mahdi. Parke's application to join the Emin Pasha relief expedition was successful. It was planned to go by sea from Zanzibar to the mouth of the Congo, ascend the river in steamers to Yambuya, and thence through the Ituri forest to Equatoria. The group of ten white men was supported by Zanzibari bearers and sixty Sudanese soldiers. They were accompanied, too, by Tippu Tib, an ivory dealer and ex-slave-trader, who had with him ninety-seven followers, of whom thirty-five belonged to his harem. In the event, Stanley lacked qualities of leadership and quarrelled with all his white subordinates including Parke, whose medical treatment later saved his life. The logistics of the expedition were faulty, the steamers were not available, and progress was delayed. The rainforest presented greater difficulties than expected, and when they finally reached Equatoria and were greeted there by Emin Pasha, he was in much better shape than they. Furthermore he did not seem at all anxious to be rescued. Eventually he did join them reluctantly for the return journey overland to Zanzibar, but their celebratory dinner at the coast was spoiled when Emin Pasha fell from a balcony and was severely concussed.

The party were feted as heroes in Brussels, Ostend, and London. Parke – the first Irishman known to have crossed the African continent – was elected honorary FRCSI. Despite initial differences of opinion, a genuine friendship had developed between Parke and Stanley, reflected in the latter's books. Even though he lacked specific remedies, Parke probably saved Stanley's life when the explorer was prostrated by a recurring acute abdominal disturbance. He also saved the lives of several other members of the party: Jephson, tortured by fever, he secured from the ravages of despair; Stairs's death he prevented by sucking the arrow-poison into his own mouth; Nelson, dying from inanition, was drawn back slowly from the brink of death. Could the sick and wounded Zanzibaris have expressed their feelings, they would have said ‘Bwana Doctari’ ‘was not a man but an angel’ (Stanley, Autobiography, p. 381).

Parke was inundated by requests for lectures, and editors of English and American periodicals wanted articles from his pen. He published My personal experiences of Equatorial Africa (1891), Guide to health (1891) and some journal articles, including ‘How General Gordon was really lost’ (Nineteenth Century, xxxi (1892), 787–94). Parke's diary (four volumes) and letters to his friend Dr John Knott (deposited in Mercer's Library) show that the latter was actually the ghost-writer, using material supplied by Parke. (Surgeon Major Parke's African journey, by J. B. Lyons, lists Parke's publications and provides a bibliography of the Emin Pasha relief expedition).

Parke's general health was good, but he had developed a liability to convulsive attacks, possibly an indication of cerebral cysticercosis. In August 1893 he visited his friends the duke and duchess of St Albans, whose yacht lay off Ardrishaig, Scotland, and on the morning of 11 August 1893 was found dead in his bedroom, still fully dressed – presumably he died in the course of a seizure. His remains were taken to Ireland for burial at Drumsna, Co. Roscommon, near Clogher House. His funeral was accorded military honours as it passed through Dublin. His statue (1896) by Percy Wood stands outside the Natural History Museum, Merrion St., Dublin. 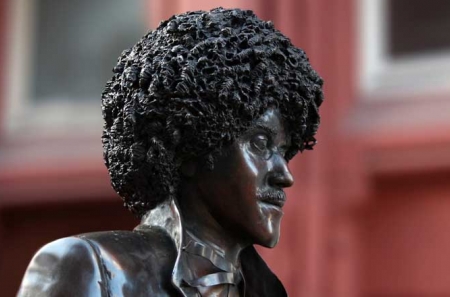 For Black History Month we revisit the life of Phil Lynott. Read how a boy from working class Dublin, who encountered hardship and difficulty in his life because of his ethnic heritage, became one of the world's... 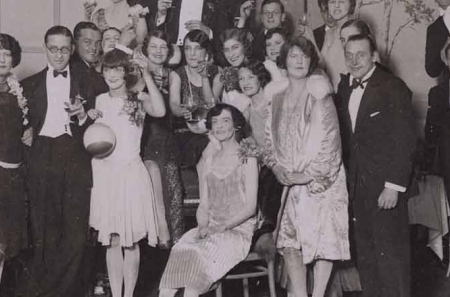 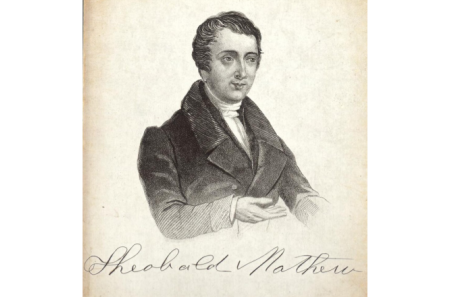