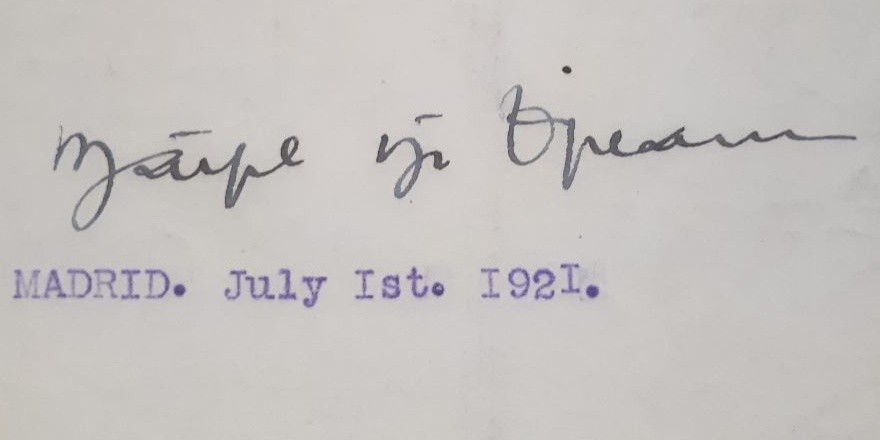 To mark the publication of Ireland: a voice among the nations by John Gibney, Michael Kennedy and Kate O'Malley, we are publishing the intriguing biography of Máire O'Brien who also features in the book. O'Brien will appear for the first time in the DIB later in December.

An illustrated history, Ireland: a voice among the nations marks one hundred years of Irish foreign policy and is a centenary project of the Royal Irish Academy (RIA), the Department of Foreign Affairs and Trade and the National Archives of Ireland. It is being launched by the Tánaiste and Minister for Foreign Affairs, Simon Coveney, on Wednesday 27 November 2019 at the RIA.

Máire O'Brien (1882–1958), republican activist, civil servant and translator, was born Mary Louise O'Brien at 2 Lower Gloucester Street (now Sean MacDermott Street), Dublin, on 23 August 1882, one of five children of the nationalist politician J. F. X. O'Brien  and his wife Maria (née O'Malley). Throughout her life she would use and be known by other variations of her name, including Máire Ní Bhriain/Ó Briain and the forename Molly. Her family moved to London in 1888 after her father became treasurer of the Irish National League of Great Britain, and she was present when he died suddenly at the family home in Clapham in May 1905. Her mother relocated to Ireland thereafter. Prior to the first world war O'Brien travelled to Spain, partly for health reasons, learning Spanish in Mallorca before moving to Barcelona. After the Easter rising she attempted to publicise the republican cause in the Spanish press, and collected money for prisoners' families. She returned to Ireland via England in March 1917 and was detained and questioned about her republican sympathies in Southampton.

O'Brien attended first aid classes in Dublin on her return, and in 1919–20 worked for the Irish Republican Prisoners' Dependents Fund; she was also affiliated with Cumann na mBan, though was never a member. As she planned to return to Spain, in August 1920 Robert Brennan and Desmond FitzGerald arranged to meet her, and requested that she distribute propaganda for the dáil government in Spain. She agreed, and returned to Barcelona in October 1920, during the hunger strike of Terence MacSwiney; while in Catalonia she attended functions in honour of MacSwiney and Kevin Barry.

O'Brien's abilities were recognised by Seán T. Ó Ceallaigh and George Gavan Duffy. In Spain she initially worked for the dáil on an informal basis; in February 1921 Gavan Duffy visited Spain to officially ask her to become an overseas press agent for the dáil. She moved to Madrid that month and took up the role from 9 July 1921, on a salary of £250 per annum. The dáil viewed Spain as a potentially important source of support, but while O'Brien's ability and enthusiasm were very highly rated by her superiors, it was felt that her credibility in Spain would be compromised by her gender (a view she apparently shared).

Her principle task was to produce an information bulletin in Spanish, and she recruited expatriate and local assistance to do so; the first edition was produced on 25 May 1921. Members of the clergy and military there were reportedly sympathetic to the Irish cause, and O'Brien reached out widely to politicians and newspaper editors. Newspapers in Barcelona were more receptive to Irish propaganda than those in Madrid, partly due to Catalan separatist sympathies, but the press in Madrid also feared British reactions; some of the material she produced in Spain eventually came to the attention of the British press. By her own account, the bulletin was being sent to over 450 interested parties throughout Spain by August 1921. O'Brien also arranged for translations of propaganda works by Erskine Childers and Darrell Figgis, amongst others, and drafted material for publication herself. Ó Ceallaigh commended her efforts and suggested that the Spanish translations be sent to Éamonn Bulfin in Argentina.

O'Brien's reports back to Dublin were comprehensive, shrewd and insightful, containing detailed overviews of the Spanish political and media landscapes. She showed energy and imagination in proposing events to bolster the republican propaganda campaign in Spain, and at one point commissioned a local artist to make a sketch of MacSwiney, 2,500 copies of which were sent to London in October 1921 to be sold to raise funds. In Spain, however, the limited funds at O'Brien's disposal curtailed her more ambitious plans.

O'Brien opposed the Anglo-Irish treaty and resigned from her post in February 1922, having arranged to wind up the activities of her office, though her successor, Osmond Grattan Esmonde, later claimed that she had deliberately left the affairs of the Irish delegation in disarray. She subsequently attended the Irish Race Congress in Paris, becoming assistant secretary of Fine Gaedhal, the organisation established by the congress as an umbrella group for the Irish diaspora, under Robert Brennan as its secretary. She returned to Dublin, and on the outbreak of the civil war in June 1922 she undertook clerical and intelligence work in Dublin for the IRA, delivering messages and ammunition to the republican positions in the Gresham Hotel. Some escaped members of the Four Courts garrison took refuge at her family home on 43 Mespil Road, which was raided on numerous occasions, as was her flat on Herbert Street, which was used as a safe house. She transported and hid weapons and documents for the IRA in Dublin throughout the conflict, and continued to work for Brennan after his appointment as the anti-treaty IRA's director of publicity until September 1923.

In August 1923 O'Brien and Johanna 'Daisy' Cogley attended the Eleventh International Committee of the Red Cross in Geneva to lobby for an investigation into the conditions in which republican prisoners were held by the Free State, as a previous report on the subject was allegedly sanitised. In September 1923, on behalf of the nominal republican government, she obtained an interview in Rome with Italian prime minister Benito Mussolini to explain the republican case, and possibly to seek Italian assistance. The interview was conducted in French; O'Brien felt that Mussolini was reasonably well-informed on Irish affairs, though he was apparently surprised by the use of executions by the Free State during the civil war.

In the late 1920s O'Brien worked for Brennan again when the Irish Press was being established. She lived in London for a period, where she translated an acclaimed edition of the French musicologist Léon Vallas's Theories of Claude Debussy (1929). Returning to Ireland, she joined the Department of Local Government and Public Health. She left the civil service in September 1938, travelling to Monte Carlo before continuing on to Madrid, from where she applied for a military service pension in April 1942. It proved difficult to obtain the necessary documentation due to the disruption of the second world war, but O'Brien was awarded a pension in April 1944, successfully appealing against the grade awarded. For administrative purposes, she was classed as a member of Cumann na mBan.

O'Brien had come back to Dublin by March 1943, but due to ill-health returned to Spain in August 1946. Between May 1947 and August 1948, she was commissioned by the Department of Education to assess and transcribe records of Irish interest held in the Spanish National Archives in Simancas. In August 1950 a second commission to examine Irish material in Spanish archives was cut short after only three weeks in Madrid, when ill-health forced her to return to Dublin. In May 1952 she declined a third commission to undertake such a role.

O'Brien's health problems intensified with age. She resided at St Monica's Nursing Home, Gardiner Street, Dublin, after her final return from Spain; by July 1957 her health had deteriorated so badly that she was unable to sign her name. She died on 12 December 1958 in St Vincent's Hospice, Dublin; the cause of death was recorded as a combination of dehydration, diarrhoea and colon cancer. She was buried with her parents in Glasnevin cemetery. O'Brien never married or had children. A small collection of her papers, dealing largely with her revolutionary activities in Spain, is retained in the National Library of Ireland.