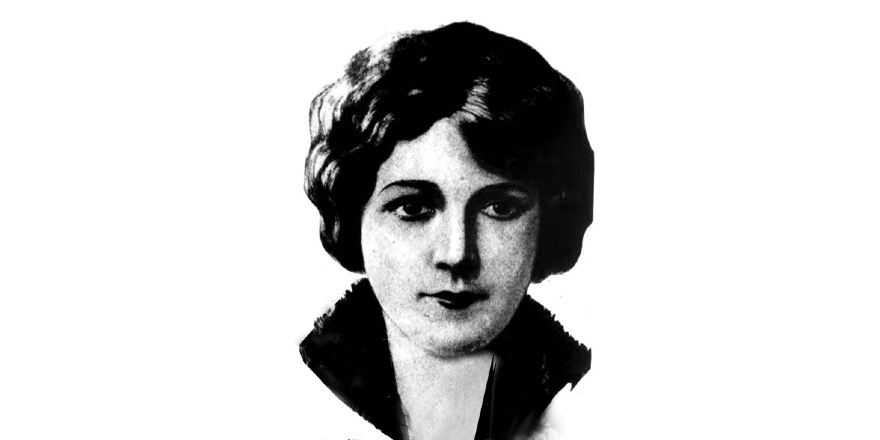 The DIB has curated a selection of its most notorious rogues – pirates, blackmailers, thieves and murderers – for your delectation. Next up is Mary Ann Duignan aka ‘Chicago May’, a one-time chorus girl who supported a showy lifestyle of jewels, furs and first-class travel through blackmail, prostitution and theft.

Duignan, Mary Ann (‘Chicago May’) (1871–1929), criminal and prostitute, was born c.26 December 1871 in Edenmore, Ballinamuck, Co. Longford, eldest among two daughters and three sons of Francis Duignan (1837–1930), farmer, and Anne Duignan (née Gray) (1852–1924); the pet name ‘May’ was attached to her from childhood. The family lived in respectable and relatively comfortable circumstances in a two-storey house on a modest farm of an acreage substantial for the locale. Her brother Peter Duignan became a Longford county councillor. Educated at national school in Edenmore, at age 18 (June 1890) she absconded with the family savings of £60 and emigrated to the USA. Drifting into prostitution, and allied larceny and extortion, by 1892 she was based in Chicago, a hive of such activity owing to the influx of workmen and visitors associated with the world's fair; her lifelong sobriquet, ‘Chicago May’, derived from this period. Moving to New York (c.1894), she was a familiar figure among the gamblers, gangsters, and courtesans in the garish clubs of the city's notorious vice and entertainment district, the Tenderloin. A striking, buxom beauty, five-feet-six-inches in height, with blue-grey eyes, and an abundance of dark auburn hair, she radiated wit, charm, and a deceptive air of innocence. Working alone or with accomplices, she employed various stratagems to thieve from her drugged, intoxicated, or distracted clients; a favourite ploy was to cast a naked victim's clothing and wallet from a hotel window to a confederate in the street, then bolt from the room. She was particularly adept at blackmailing wealthy clients, sometimes with the aid of compromising letters or photographs; victims often made substantial and repeated payments to avoid exposure, or the threatened wrath of a fictitious ‘enraged husband’. Operating in cities throughout North and South America, moving frequently to avoid recognition or prosecution, she supported a showy lifestyle of costly jewels and furs, luxurious restaurants, and first-class travel. Obtaining, by her own account, a role as a chorus dancer in a hit musical, ‘The belle of New York’ (1897), she utilised the stage as a convenient device for attracting clients to prostitution. She married (1899) James Montgomery Sharpe, the errant son of a well-to-do New Jersey business family; leaving him within a year, she added his surname to her plethora of aliases. Her claim to an earlier marriage to a wild-west bandit cannot be documented.

Amid a crackdown on vice and petty crime by NY police reformers, Duignan moved to London (1900). Making it the base for her rackets throughout Europe and north Africa, she was described in police files as ‘the worst woman in London,’ her victims said to have included prominent industrialists, jurists, politicians, and aristocrats. She took as her lover and criminal partner international jewel thief and bank robber Eddie Guerin – London-born to a father from Co. Limerick, and Chicago-bred. With two accomplices they burgled the American Express office in the rue Scribe, Paris, netting as much as $300,000 (27 April 1901). Although fleeing successfully to London with her and Guerin's share of the haul, she was arrested several weeks later when she visited Guerin, who had been apprehended speedily, in his French prison, to help prepare his defence. Sentenced after a year in remand, she served over half of a five-year term in Montpellier before receiving early release (1905), either by securing a presidential pardon (her account), or by seducing and then blackmailing the prison doctor into signing a medical certificate (Guerin's rendition). Based again in London, during this period she visited her parents' Co. Longford home. She claimed to have raised the money that facilitated Guerin's daring 1905 escape from Devil's island prison colony, French Guiana, by bribery of guards and other officials. Reunited briefly in London, the couple quarrelled violently – Guerin allegedly ‘thrashing’ her, and threatening her with a gun, and with disfigurement by acid – after which May, out of revenge and fear for her safety, probably informed on him to British police as a fugitive from French justice (April 1906). On Guerin's discharge a year later following the quashing of a French extradition request, Duignan accompanied her new lover, Charlie Smith, as he fired six gunshots at Guerin on a London street, wounding him in the foot (15 June 1907). After a sensational one-day trial at the Old Bailey (25 July 1907), which titillated the public with lurid revelations of underworld activities, Duignan – described in testimony as ‘the most notorious woman in Europe’ – was convicted of attempted murder. Sentenced to fifteen years hard labour, after serving ten years in Aylesbury prison (1907–17), during which time she met Irish republican Countess Markievicz, she received early release for good behaviour and poor health. Deported to the USA as an American citizen by marriage, she soon returned to prostitution and related criminality, but experienced indifferent success and frequent problems with the law. Faded in looks and glamour, in declining health, suffering from alcoholism, while in a prison hospital in Detroit (1926) she came to the attention of the pioneering criminologist August Vollmer (1876–1955), who counselled her to go straight by writing her story. Following the successful reception of five illustrated autobiographical articles in the tabloid New York American Weekly (July–August 1927), under the billing ‘the most dangerous woman in the world,’ she published a heavily edited autobiography, Chicago May (1928), under the name May Churchill Sharpe. Notable for its lack either of remorse or of cloying penitential moralism, the book, like Guerin's subsequent memoir I was a bandit (1929), is grossly unreliable in matters of fact. Engaged to marry her old confederate Charlie Smith, who re-joined her after twenty-two years' separation, following surgery for a gynaecological condition she died in Philadelphia general hospital on 30 May 1929. She is buried in an unmarked grave in Philadelphia's Fernwood cemetery.