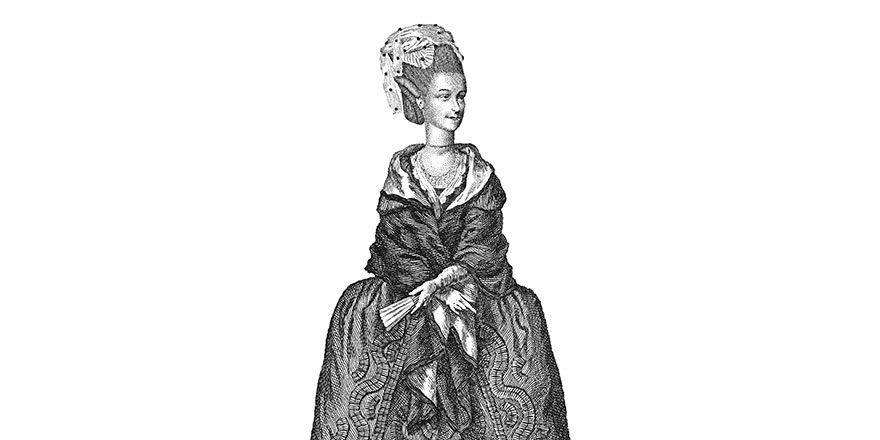 The DIB has curated a selection of its most notorious rogues – pirates, blackmailers, thieves and murderers – for your delectation.  Our next rogue is Caroline Rudd, whose trial for forgery was one of the most sensational court cases of the eighteenth century and was serialised in newspapers across Britain and Ireland.

Rudd, Margaret Caroline (c.1745–1797), courtesan and forger, born c.1745 in Lurgan, Co. Armagh, the only child of Patrick Youngson, an apothecary, and his wife Isabella (née Stewart), through whom Margaret, more commonly known as Caroline, claimed to be descended from nobility. According to the pedigree she acquired later in life from the court of the Lord Lyon in Scotland, her mother was the illegitimate child of a Major Stewart, who was 'descended from the Graham Earls of Monteith, and Stewart Earls of Galloway, whose common ancestor and mine was … the Sixth Lord High Steward of Scotland, father to Robert the Second, first monarch of the name of Stewart' (Rudd, 1788, 4).

Caroline had no siblings and was orphaned young, her father died while she was a baby and her mother when she was eight-years-old. She was then placed in the care of her maternal uncle John Stewart, a moderately prosperous farmer. From an early age Caroline proved troublesome. She was sent to boarding school in Downpatrick, where it was hoped she would acquire the education and ladylike accomplishments suitable for a good marriage. Following an unspecified scandalous incident, however, the parents of the other girls threatened to remove them from the school if she were not expelled (Anonymous, 1776, 14). Fearing his own children would be exposed to the scandal her uncle sent her to live with her paternal grandmother in Lurgan, where she met Lieutenant Valentine Rudd of the 62nd Foot Regiment. After ten days' courtship they were married, on 4 February 1762, in an anglican church with John Stewart's consent.

Initially the couple lived in army quarters in Lurgan but within a year Rudd, demonstrating an early capacity for enjoying a lavish lifestyle, had spent most of her husband's income. In 1763 they sailed for England to live with his family in St Alban's, carrying with them a letter of introduction from John Stewart to James Adair, a neighbouring landowner in Hertfordshire. This inaugurated the fateful connection between Rudd and the Adair family which would feature prominently in her trial for forgery. Her husband returned to his regiment and Rudd remained in St Albans until the summer of 1766 when, bored with country life, she left for London, possibly without her husband's consent. The move to London was a fateful one. Rudd took lodgings in Princes Street, a fashionable part of the city just off Hanover Square, with Mr Marseilles, a tailor, and her husband joined her there, having retired from active duty in the army on half-pay. He had recently come into his inheritance, so they enjoyed an extravagant lifestyle for several months before the money inevitably began to run out. As their debts mounted, the marriage foundered. In November 1766 Rudd stole away in the middle of the night with another lodger from the house, Benjamin Bowen Reid, with whom she had begun an affair. Rudd and Reid lodged first above a tripe shop in Ratcliff Highcross and then above an apothecary's on Ratcliff Highway, both in the east end of London and a long way from the more fashionable parts of the city. Reid, a cornet in the army, had very little money and was soon being pursued for the debts that the couple accumulated. In addition, Rudd continued to run up debts in her husband's name and on 26 February 1767 he was arrested and committed to debtors' prison for owing £96 for his wife's accommodation in the east end. Reid fled the country and her husband attempted to distance himself from his wife's spending. When divorce proceedings failed due to legal difficulties proving Rudd's infidelities, her husband took out a newspaper article warning 'all persons against giving her credit on her husband's account' as he would not pay any debts she contracted (Daily Advertiser, 1767).

Rudd, homeless and penniless, turned to prostitution. Initially she worked in low-end brothels but in early 1770 her fortunes changed when she forged a business relationship with a pimp named Andrew White. He introduced her to wealthy clients, including the Marquis of Granby, the Duke of Cumberland and Joseph Salvador, a wealthy Sephardic Jew and influential financial figure of the era. Her fortunes restored through generous allowances from indulgent lovers, Rudd re-entered fashionable London society and in April 1770 attended a masquerade ball where she was introduced to Daniel Perreau. Perreau was an identical twin but whereas his brother Robert was a respectable apothecary with his own business, Daniel had failed to establish himself in the silk trade and was a gambler in the trading houses of London. He and Rudd were well suited, and they began living together as a married couple in Mrs Johnston's boarding house in Soho. They had three children together between July 1771 and April 1774 and to the outside world appeared to be a conventional couple, albeit one that enjoyed the finer aspects of eighteenth-century life.

On 15 March 1775 Robert Perreau entered a magistrate's office in Bow Street and announced that he wished to give evidence against Rudd in a case of forgery. He alleged that Rudd had embroiled him and his brother in serial fraud to fund her lifestyle. According to his account forged promissory bonds, allegedly signed by William Adair – a relative of James Adair and a wealthy army agent well known in London's financial circles – had been presented to several financiers, including the Drummond brothers and Sir Thomas Frankland, to secure loans of more than £5,000 to sustain Rudd's extravagant lifestyle. In counter-evidence, Rudd alleged that the Perreaus had forced her to forge Adair's signature at knifepoint in order to cover the debts both brothers had accumulated speculating in London's trading houses. The accusations led to one of the most sensational court cases of the century and it was serialised in the flourishing newspaper industry across England. Rudd appears to have been the first of the accused to grasp how useful the daily publications could be, and she courted public sympathy ruthlessly. Even before the case came to trial, she wrote a two-part history of her relationship with Daniel Perreau. Facts, or, a plain and explicit narrative of the case of Mrs Rudd was published in most London newspapers, and in it she claimed that a 'conspiracy' had been formulated against her life by the Perreaus (Rudd, 1775, 23). A master of propaganda, throughout the summer of 1775 she kept her name in the public consciousness, engaging in correspondence with her enemies in the newspaper pages but always in an eloquent and genteel fashion. Long before the trials began, she had built up her public image as an innocent and defenceless mother preyed upon by speculators and fraudsters.

The Perreaus went to trial first, Robert on 1 June 1775, his brother Daniel the following day. Both were found guilty of publishing a fraudulent bond and on 6 June they were sentenced to death. Rudd's trial was delayed until 8 December when she was brought before the court on four separate charges, including 'feloniously forging and counterfeiting a bond for £5,300 with intent to defraud William Adair' and 'feloniously uttering and publishing it'. If found guilty, the sentence was death. The elites of London society, anxious to view such a celebrity case, queued from early morning to gain entry to the court room. By the time the trial opened at nine o'clock the room was so crowded that additional constables were placed at the doors to stop people from coming in, and some ladies had to leave for fear they might faint from the heat (McGovern, 2001, 218–19). The prosecution case appeared strong, relying on the testimony of Mrs Christian Hart, a former servant of Rudd's, who claimed her mistress had attempted to entice her to make false statements against the Perreaus, and against Sir Thomas Frankland. Rudd's defence team, however, discredited each witness sufficiently for the jury to announce, at eight o'clock that evening, 'according to the evidence before us, not guilty'. The courtroom erupted in cheers and applause (McGovern, 2001, 240).

Rudd departed the courtroom immediately, in a coach allegedly sent by her lover Lord Thomas Lyttleton and retreated to Bath away from the public gaze. The Perreau brothers were hanged on 17 January 1776, despite sustained pressure on the king to pardon them. The dignity with which they went to the gallows transformed them from villains to victims in the court of public opinion. Rudd was now viewed as having engineered the fraud and sent innocent brothers to their death. Although she enjoyed several more comfortable years, lodging in Mayfair and engaging in affairs with, among others, the biographer James Boswell, her ability to attract lovers was in decline. She was committed to Fleet prison for unpaid debts in March 1787 under the name Caroline Stewart and, upon her release in February 1788, she published a vitriolic pamphlet entitled Mrs Stewart's case, in which she excoriated her supposed relations, Lords Galloway and Rawdon, for abandoning her.

By 1794 Rudd was living in Newgate prison, apparently the partner of a man incarcerated on the debtors' side (it was not uncommon for destitute women to stay with their imprisoned partners). On 4 February 1797 the Times announced that 'the once celebrated Mrs Rudd died a short time since in an obscure apartment near Moorfields'. Her former servant, Mrs Christian Hart, in a pamphlet published shortly after the trial ended, perhaps summed up her life best: '… all that knows you are infatuated by your spells and love you, and [to] all who love you, you bring to destruction as fast as possible' (Hart, 1775, 6).