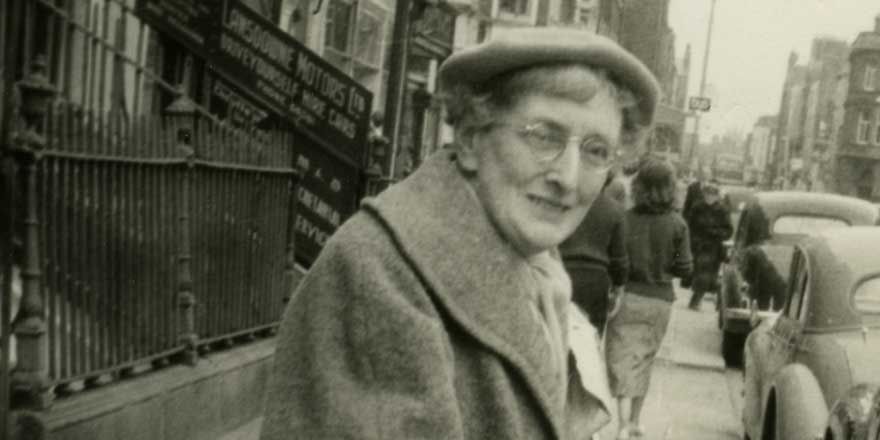 Read the Dictionary of Irish Biography entry on Eleanor Knott, by Eoghan Ó Raghallaigh, below.

Knott, (Philippa Marie) Eleanor (1886–1975), Irish-language scholar, was born 18 November 1886, one of two children of John Freeman Knott, physician, of Kingsland, Co. Roscommon, and Philippa Annie Knott (née Balcombe), of Hull. Her family lived at Sallymount Terrace, Ranelagh, Dublin. She was educated at Abercorn College, 52 Harcourt St. It was her mother, who had family ties with Cornwall and an interest in the Cornish language, who encouraged her most to learn Irish. Having taught herself to read modern Irish, she was urged by R. I. Best (qv) to study the older language at the School of Irish Learning in Dublin (founded 1903). In October 1907 she received a scholarship to allow her to continue her studies and she regarded this as a turning-point in her career. During that year she wrote on an almost weekly basis for Sinn Féin and the Irish Peasant under the pseudonyms EK, PMEK or Finnéigeas, expressing nationalist sentiments.

In 1911 she joined the staff of the RIA's Dictionary of the Irish language as an assistant to Carl Marstrander (qv). The three fasciculi jointly edited by her over the next forty years and more are regarded as among the best lexicographical works produced by the Academy. In 1928 she was appointed lecturer in Celtic languages in TCD. She graduated MA (Dublin University) in 1932, and a special chair of early Irish was created for her in TCD in 1939. A year earlier she was awarded a D.Litt. honoris causa by the NUI. In 1949, following the repeal of a statute prohibiting women members, she shared the distinction with four others of being the first women elected to the RIA. Progressive blindness hastened her retirement in 1955, although she was almost seventy years of age by then.

Her publications include The bardic poems of Tadhg Dall Ó hUiginn (2 vols, 1922, 1926), An introduction to the Irish syllabic poetry of the period 1200–1600 (1928), Togail bruidne Da Derga (1936), and Irish classical poetry (1957). In addition to publishing many articles in scholarly journals she served as joint editor of Ériu (xii–xx). A few poems she composed herself in the style of the classical poets were published posthumously in Ériu and other journals (see Baumgarten, cited below). In the realm of the modern language she published in 1910 a companion vocabulary to a redaction of an old tale by Peadar Ó Laoghaire (qv), and edited three more by him. She was also active in promoting a simplified system of spelling for the modern language.

She never married. She died at the Molyneux Home for the Blind, Leeson Park, Dublin, on 4 January 1975 and was buried at Mount Jerome cemetery, Dublin. Her papers are in the RIA.