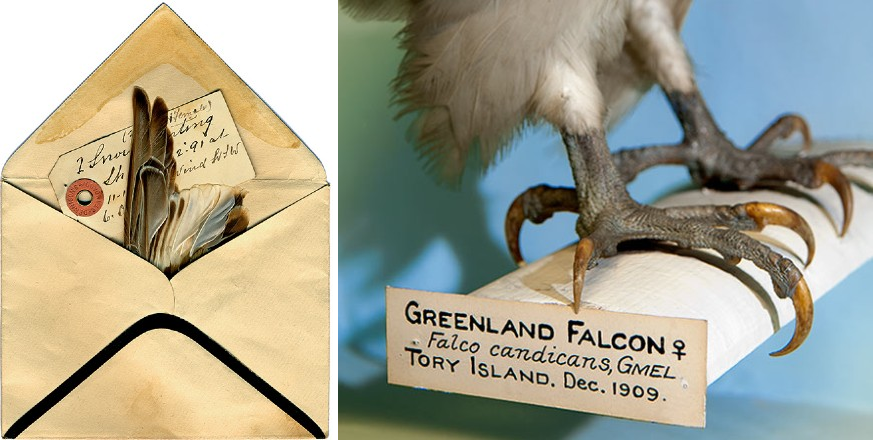 Selected by Dr Eoin Kinsella (Documents on Irish Foreign Policy), R. M. Barrington (1849–1915) teamed up with lighthouse keepers around the country to develop Irish ornithology's seminal work on bird migration. This biography is part of a series selected for your reading pleasure during this challenging time.

I spent most of 2015 working on an exhibition for the Commissioners of Irish Lights, with my colleague Dr Michael Kennedy, looking at the history of Irish lighthouses and lightkeepers. The most enjoyable part of our work was the time researching at Baily Lighthouse in Howth, working through the Commissioners’ wonderfully rich and interesting archive. While there, we spent some time looking into the ways lighthouses, lightships and lightkeepers have contributed to scientific knowledge, including the RIA’s Clare Island Survey.

By far the most fascinating – and unusual – contribution came about following a request from R.M. Barrington, now recognised as one of Ireland’s leading ornithologists. In 1882 Barrington wrote to lightkeepers seeking their help in tracking the migration of birds across Ireland, then little understood. They were only too happy to help, on a purely voluntary basis.

Over the next eighteen years, about thirty thousand observations on bird movements were sent to Barrington, along with the wings and legs (and sometimes the entire specimen) of more than 2,000 birds who became disoriented by the powerful lights and were ‘killed striking’ the lighthouse. In 1900 Barrington published the results in The migration of birds as observed at Irish lighthouses and lightships, a seminal work in Irish ornithology.

Yet the lightkeepers kept sending observations and specimens to Barrington’s home in Wicklow for many years, even after his death in 1915. Originally housed in his own private museum, they’re now kept in the National Museum. During the long drive to Howth I would often think of the incredible research network set up by Barrington, and of the lightkeepers carefully collecting and mailing their observations and specimens to Wicklow.

Dr Eoin Kinsella works on the RIA's Documents on Irish Foreign Policy project and is the author of the forthcoming book: Dublin City University, 1980–2020: Designed to be different (2020)

Barrington, Richard Manliffe (1849–1915), naturalist and ornithologist, was born 22 May 1849 at his family home of Fassaroe, Co. Wicklow, eighth and youngest son of Edward Barrington, JP, and the only son and eldest child of his second wife, Huldah Barrington (née Strangman). The Barrington family had a strong scientific leaning, Edward having an interest in meteorological recording, which he carried out at the extensive Fassaroe farm; his brother Richard was a good botanist, and younger brother John a founder of the Barrington Lecture Trust.

Barrington was a delicate child, with a keen interest in natural science. He was educated mainly at home, with the exception of one year at a day-school in Bray. He entered TCD (1866), graduating with honours (1870) in experimental and natural science. In 1875 he was called to the bar, but soon found the life of a land valuer and farmer more to his liking. After the death of his father (1877) he became more involved with the management of the farm at Fassaroe. As an undergraduate he had met Alexander Goodman More of the Dublin Natural History Museum, who became a close friend and exerted a strong influence on the younger man. He spent many weeks every summer on the islands, mountains, and lakes of western and southern Ireland, gathering notes on plants and birds. His later reports on the flora of Lough Ree, Lough Erne, Ben Bulben, Tory Island, and the Blaskets were included in the second edition of More's Cybele Hibernica (1872).

Ornithology was another of his main interests, and in 1882 he began correspondence with lighthouse keepers on the migration of birds, the project for which he is best known. The work was funded by the British Association's migration committee until 1888, but after this he bore the expense himself. The results were published in The migration of birds as observed at Irish lighthouses and lightships (1900) and included many new records for Ireland. The specimens sent by the keepers were either passed on to the National Museum in Dublin or preserved in his ‘beautifully kept private museum at Fassaroe, which he was always ready to show to his friends’ (Nature, 1915).

As well as islands off Ireland, he travelled to Iceland (1881), remote islands off Scotland (1883, 1886, 1890), and Switzerland (1876, 1882). He had a reputation as a mountain climber, having climbed many peaks in the Alps, including the Eiger (1876), and walked across the Rockies (1884). A member of the British Alpine Club, he achieved a record by ascending six peaks in the Alps within ten consecutive days. His brother Charles, as part of his grand tour of Europe, is reputed to have been the first person to ascend the Eiger (1858). In 1886 Richard, with William Spotswood Green, organised an expedition to Rockall on board the Congested Districts Board steamer SS Granuaile, the aim being to note and preserve specimens of biological or geological interest and investigate the possibility of siting a meteorological station on the rock. The other naturalists on board were W. F. de Vismes Kane, H. L. Jameson, R. L. Praeger, and J. A. Harvie-Brown (who, with Barrington, covered half the expenses). The team failed to land due to high seas, but were the first to observe the bird life of Rockall. A weather station was deemed impracticable.

Barrington's interests were wide and included native mammals, agriculture, and meteorology, as well as Irish science and economics. He contributed to several journals, was MRIA and an active member of several societies – the RDS, Royal Zoological Society of Ireland, Statistical and Social Inquiry Society, Dublin Friends' Institute, and Irish Society for the Protection of Birds – and one of the founders of the Dublin Naturalists' Field Club. He was known for his personal charm and kindly sense of humour, and held friendships with many of the noted Irish naturalists of the time. Once he made a wager of £50 with H. C. Hart to walk from Dublin to the summit of Lugnaquilla and back in less than twenty-four hours, a distance of 75 miles (120 km). He lost his bet. After retiring from his land commission work in the spring of 1915, he died later that year while driving with his son home from Dublin, 15 September 1915, at the age of 66 years.

He married (1897) Lena, daughter of Capt. G. Gyles of Kilmurray, Co Waterford; it is said that the Fassaroe museum was her suggestion. His herbarium is at the National Botanic Gardens, Glasnevin; a list of his publications is found in the Irish Naturalist, xxiv (Nov. 1915).

Images: Reproduced by kind permission of Karl Grimes, taken from his exhibition Dignified Kings Play Chess on Fine Green Silk, incorporating two projects focusing on Barrington’s collection in the National Museum: The Curious Case of Mr B and Killed Striking.