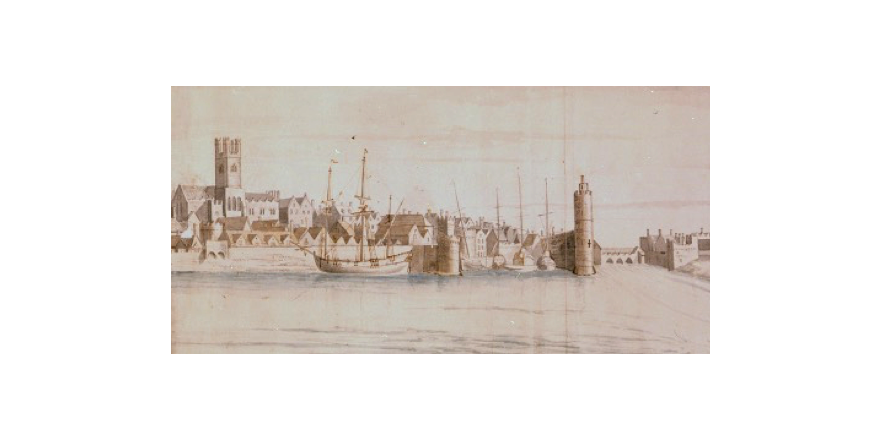 Selected by Sarah Gearty, cartographic editor of the Irish Historic Towns Atlas, Thomas Phillips was a seventeenth-century military surveyor. His biography is part of our Favourite DIB lives #LockdownReading series.

The most remarkable aspect of Thomas Phillips’s work is the visual record he left behind, which offers a unique glimpse of urban Ireland in the late seventeenth-century. Phillips visited Ireland just twice (1684–5 and 1690) but his time here was extremely productive. Though employed as military surveyor and engineer of fortifications and harbours, he broadened his scope successfully to map-maker and landscape artist. A large collection of plans and drawings from across the four provinces have survived from his time spent here and are available to browse online via the National Library of Ireland and the British Library. Many of these go beyond the remit of military survey especially when it comes to his depictions of Irish towns and cities, where he clearly relishes topographical details as he alternates between plan and prospect in his representations of urban form.

In the IHTA, Phillips is one of the characters we encounter on a regular basis as most of the towns and cities he surveyed have been or will be produced as part of the series. His contribution to our understanding can be clearly observed through the pages of the Atlas. His surveys of Athlone and Belfast offer the first cartographical representation we have of those urban centres. Elsewhere, Carrickfergus and Limerick have maps that go back to the sixteenth century, but the quality of the Phillips ‘ground plans’ add detail and accuracy to a record previously based on bird’s-eye, pictorial-style depictions. Once in circulation, maps of this era tended to be copied and modified – several late nineteenth-century versions of Phillips's ‘exact survey of the city of Dublin’ are held in the RIA’s own library (RR MC 3/5–15). Derry and Galway are two examples of towns that received the ‘full treatment’ of plan and prospect by Phillips. For others, just the later exists such as for Drogheda, where the view of 1685 can be compared with that of Francis Place (1698). The prospects Phillips produced for Dungarvan and Sligo offer exclusive access to how those towns appeared in the late seventeenth-century.

The impact of Phillips’s work can be traced in how we understand our urban heritage. Like Phillips, in the IHTA we are interested in topography, and specifically that of the town with its streets, plots, storeys, spires and gardens all displaying elements of how we live or have lived and function. As a source for the IHTA, Phillips’s work is particularly useful in its depiction of existing town walls and defences – a prerequisite for planning new possibilities in the late seventeenth-century – but for us now it provides a direct link to the shape and form of the medieval town. Less obvious is the evidence Phillips supplies on the early shoreline, rivers, street plan and suburban development, all elements of the town’s ‘bedrock’, human and physical, crucial when we are attempting to map the urban past as a way of understanding it in the IHTA. As Ruth Devine explains in her biography, Phillips was a man with a good reputation but his efforts in life were met with dismissal, disappointment and debt. His legacy, however, will continue to be examined and appreciated by students, scholars and citizens of Irish towns for many years to come.

Thomas Phillips’s plans and prospects have been reproduced, described and used as a source in IHTA, no. 2 Carrickfergus; no. 6 Athlone; no. 12 Belfast, part I; no. 15 Derry~Londonderry; no. 19 Dublin, part II; no. 21 Limerick; no. 24 Sligo; no. 28 Galway; no. 29 Drogheda; and no. 30 Dungarvan (forthcoming) –visit Irish Historic Towns Atlas for more information. The original material is available to browse via the National Library of Ireland online catalogue and the British Library’s online catalogue via the King George III Topographical Collection.

Phillips, Thomas (c.1635–1693), military engineer and topographical watercolourist, came to Ireland from England in the winter of 1685 during the reign of James II, with instructions from the master of the king's ordnance, Lord Dartmouth, to survey and report on the principal fortified places, castles, forts, and garrisons and to draw exact designs of their present condition and estimate the cost of any necessary repairs. He was also charged with fortifying each place so that it was capable of withstanding invasion. Little is known of his origins except that he served successfully as both a master gunner and military engineer with considerable expertise in the design of defensive weaponry, bombardment, map-making, and fortification.

Before coming to Ireland he had worked in the Channel Islands (1679), making maps and plans of probable landing places and of defences needed. Many of these maps and plans are held in the British Museum and the National Maritime Museum, Greenwich. He also worked on the Isle of Wight and went on an expedition to Tangiers (1683) under Maj. (later Sir) Martin Beckman. Samuel Pepys, who travelled with this expedition, mentions Phillips in his correspondence. He was appointed by royal warrant his majesty's second engineer on 23 December 1685 and was largely based in London at the board of ordnance. His appointment was renewed by royal warrant of William and Mary on 8 May 1689 and he was also made captain of a company of miners. However, on his refusal for unknown reasons to return to Ireland with the veteran Marshal Schomberg, he was dismissed from both positions. He continued working, invented a gun carriage (1690), and was back in Ireland again as an engineer in the army of John Churchill, earl of Marlborough, where he took part in the sieges of Cork and Kinsale.

Although strategic defence may have been foremost on his mind, the watercolour maps and prospects that he produced on his first trip to Ireland (1685) are quite beautiful and show considerable artistic skill and sensitivity. Duplicate sets of his maps, with his recommendations and estimates for improving Irish fortifications are preserved in the NLI. His drawings are clear and accurate and his report on conditions and costs of repairs is thorough and exacting. His view of Limerick is a particularly fine example, showing Thomond Bridge spanning the River Shannon and several projecting towers, some of them mills, along the waterfront. Phillips felt Limerick was one of the few towns capable of withstanding a siege, although he recommended that a citadel or magazine be built to store arms. He was right, as William abandoned his attempt to take Limerick during the Jacobite retreat (1690). Galway, too, is represented, showing some of the cannon on the bulwark facing towards the Atlantic. He considered the west coast to be too wild and hostile to pose any real threat of invasion and believed that Cork and Kinsale presented a greater danger, no doubt remembering the Spanish invasion (1601). He mapped and inspected the chief towns and ports of the four provinces including Dublin, Cork, Belfast, Waterford, and Carrickfergus. In a letter from the earl of Longford to Lord Dartmouth (27 June 1685), Longford refers to ‘Honest Tom Phillips being on his return to England’ and comments on his excellent character and conduct and the great value of the drafts and observations he made while surveying. In Longford's opinion he should have ‘surveyed the whole sea coast of the kingdom and not only the chief ports’. He highlights Phillips's emphasis on the importance of Cork Harbour and urges that fortifications be built to secure it, ‘in case any sinister accident befall our fleet’ (HMC, Rep. 11, 125).

By royal warrant dated 16 May 1693, Phillips was appointed chief ordnance officer on the expedition against France. He was in charge of bombs, and at Saint-Malo on 16 November 1693 a heavily loaded fireship was set alight and used to destroy the town. The explosion caused enormous damage and injured many, including a number of the British attackers. Phillips himself may have been one of the casualties, as he died on board his ship on 22 November. He left a widow, Frances, and a family in poor circumstances, as it seems his pay was in arrears. His drawings provide some of the best evidence of the extensive defensive walls and fortifications that from the thirteenth to the eighteenth century protected most major towns in Ireland.