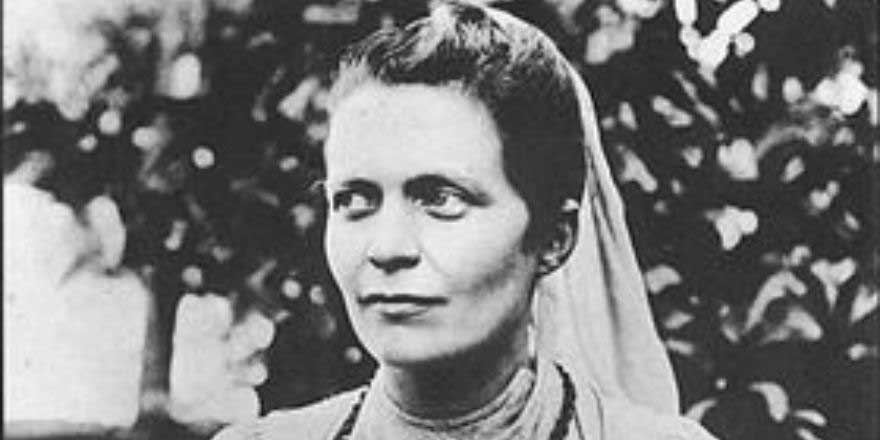 Dungannon born Margaret Noble is better known in India as Sister Nivedita, educator and political activist. Read the DIB entry for her by Maurice Hayes.

Margaret Elizabeth Noble (Sister Nivedita) (1867–1911), educator, writer, and political activist in India, was born at 23 Scotch Street, Dungannon, on 28 October 1867, the eldest daughter and first child of Samuel Richmond Noble and Mary Isabel Hamilton. Both male grandparents are said to have been active home-rulers. Samuel Noble is described on Margaret's birth certificate as a linen draper. He became a methodist minister and moved to England with his family, first to Oldham and later to Great Torrington in Devon, where he died at the age of thirty-four. The family then returned to Ireland, but Margaret finished her education at college in Halifax. She began her career as a teacher in Keswick in 1884 and, after spells in Wrexham (1886) and Chester (1889), moved to London. Impressed by the educational theories of Pestalozzi and Froebel, she opened her own kindergarten, the Ruskin School, in Wimbledon. In London she was part of the intellectual and cultural life of the period that centred on the Sesame Club.

In 1895, after attending a lecture by Swami Vivekananda, and meeting him, she embraced his philosophy of Vedanta and followed him to India as a disciple and a member of the Ramakrishna mission. She arrived in Calcutta in 1898 and was given by Vivekananda the name Nivedita (‘the dedicated one’). In Calcutta she set up a kindergarten school and dedicated herself to the cause of India, to the education and empowerment of Indian women, and to the relief of distress in famine-stricken and flood-ravaged areas of Bengal. Sharing Vivekananda's vision of a free, emancipated and independent India, after his death in 1902 she moved out of the mission as her work and thought took on a more political edge. She was a passionate advocate of Indian nationalism, and gradually moved towards a more aggressive and assertive espousal of that cause. In 1898 she hoped that Britain and India could love one another, but soon became disillusioned and went on to oppose bitterly all aspects of British rule. She saw India as a natural geographic and political unit stretching from the Himalayas to the southernmost cape, defined by the mountains and the ocean. In attempting to define a common Indian identity, she drew parallels between Punjabi and Bengali, Sikh, Muslim and Hindu and the common sense of Britishness she perceived in the United Kingdom between Irish, English, Scots and Welsh. In her writings she invariably referred to herself as an Englishwoman.

She lectured widely in India and was a frequent and prolific contributor to a wide range of publications such as The Review of Reviews, Prabuddha Bharata and the Modern Review. The book for which she is best remembered is The web of Indian life (1904), and among her other books are Cradle tales of Hinduism (1907), and The Master as I knew him (1910). She signed herself as Sister Nivedita of Ramakrishna-Vivekananda.

Bitterly critical of Lord Curzon for the partition of Bengal and the Indian Universities Act, she laid the blame for poverty and the poor state of the Indian economy on British administration and policies. All this time she was moving to what was called in Ireland of the period ‘advanced nationalism’. Having little patience with moderate politics or peaceful protest, she came to side actively with the Indian Freedom movement and also supported the Swadeshi movement, the educational work of Chandra Bose, and the activities of Swami Aurobindo of Auroville, Pondicherry. She is reputed to have smuggled chemicals out of school laboratories for those who were experimenting with bomb-making.

As a result of her workload and exposure to disease and hardship, her health broke down about 1905 and she withdrew to a more secluded life of contemplation at Kurseong, near Darjeeling. She made an extended trip to Europe and America in 1907–9, lecturing, promoting the cause of Indian nationalism, and raising funds. She travelled again to America in 1910. On her return in the spring of 1911, she retired to Darjeeling where she succumbed to an attack of dysentery and died 13 October 1911.

Sister Nivedita is remembered in India as the closest disciple of Swami Vivekananda, guru of the Indian spiritual renaissance, and as one of the foremost of an influential group of nationalist thinkers and activists in the first decade of the twentieth century. Tagore knew and admired her, as did Ramsay MacDonald and Lady Minto. For many Europeans she was the voice of radical India. She saw her task as that of awakening the Indian nation, and her contribution to the creation of national consciousness and the making of modern India was recognised in the issue of a postage stamp bearing her image to commemorate the centenary of her birth in 1967.