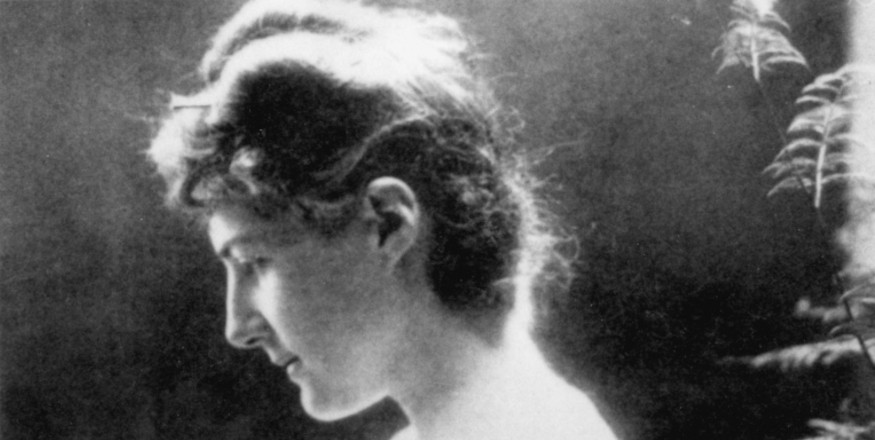 Florence Stoker, Oscar Wilde's 'first love' and the woman whose canny management of her husband Bram's estate helped make 'Dracula' a household name, is among the sixty-six 'missing persons' (twenty-eight of whom are women) newly added to the DIB this month.

Florence Stoker (1858–1937), literary executor and wife of Bram Stoker, was born Florence Anne Lemon Balcombe on 17 July 1858 in Falmouth, Cornwall. She was one of seven children (five girls, two boys) of James Balcombe of Kilkenny and Philippa Anne (née Marshall). Her father, an army officer, had served in the East Indies, the Crimea, the Ionian Isles and Malta. The family moved back to Ireland when she was two as James Balcombe joined the Royal South Down Militia, rising through the ranks to become lieutenant-colonel in 1876.

Little information is available about her early life and education. Most accounts of her are framed in relation to the men in her life, with two characteristics recurring: her surfeit of beauty and her lack of money. She was also reputed to have a sparkling wit and sociability that made her much sought-after company, and was fond of music and the theatre.

She met Oscar Wilde in the summer of 1876 when he was home in Dublin from Oxford's Magdalen College. Wilde appears to have been quite taken with her and she is often described as his 'first love'. In a note to a friend Wilde wrote: 'I am just going out to bring an exquisitely pretty girl to afternoon service in the Cathedral. She is just seventeen with the most perfectly beautiful face I ever saw and not a sixpence of money. I will show you her photograph when I see you next' (quoted by Fitzsimons, 2015). Wilde called her 'Florrie' and gifted her with a watercolour landscape he painted, as well as a small gold cross with his name inscribed on it.

Florence's long-distance relationship with the undergraduate Wilde fizzled and her relationship with Bram Stoker, who was eleven years her senior and working in the civil service, began. It is unclear exactly how and where Florence and Bram met, but family members suggest their lives 'intersected many times' in Dublin social circles (W. Parker Stoker, 2018). Bram was not satisfied with his civil service career, and in his spare time volunteered as an unpaid drama critic. He met and befriended the actor Henry Irving in Dublin in 1876, and in 1878 Irving asked him to become his acting-manager. Bram and Florence hurriedly brought their wedding forward, marrying on 4 December at St Ann's Church, Dawson Street, Dublin, before travelling to England for Bram to take up his new role. It is speculated that Florence too had theatrical aspirations but these were to go largely unrealised.

Florence and Bram's only child, Irving Noel Thornley Stoker, was born on 31 December 1879; Henry Irving stood as godfather. Noel would later drop his first name, saying he resented Irving for having monopolised his father's time when he was growing up. The nature of Bram's role at Irving's Covent Garden theatre, the Lyceum, kept him out from late morning until late at night six days a week, as well as undertaking overseas company tours for months at a time.

The Stokers had initially rented a flat on Southampton Street in Bloomsbury, close to the Lyceum, but in 1881 they moved to 27 Cheyne Walk in Chelsea, an address at the heart of literary London. On Sundays Florence would host popular gatherings for their theatrical, literary and artistic circle, which over the years would include W. S. Gilbert (playwright and lyricist of the musical duo Gilbert and Sullivan, with whom Florence had a particular connection), Sir Arthur Conan Doyle, George Bernard Shaw, Jerome K. Jerome, George Moore, W. B. Yeats, Oscar Wilde and his mother Lady Jane Wilde, who had long been a friend of Bram's separate to her son's connection with Florence.

Florence appeared on stage in a bit part as one of the vestal virgins in the Lyceum's lavish production of another friend, Alfred, Lord Tennyson's The cup, which opened in January 1881. Oscar Wilde, who greatly admired the Lyceum's leading lady Ellen Terry, was overcome at the thought of the two women appearing on stage together. He sent Terry two crowns of flowers, instructing her to give one to 'Florrie' saying: 'I should like to think that she was wearing something of mine the first night she comes on the stage, that anything of mine should touch her … She thinks I never loved her, thinks I forget. My God how could I!' (Belford, 135). Florence is thought to have appeared as an extra in other productions, and to have acted in plays staged for charitable causes.

In late 1882, the Stoker family moved to 17 St Leonard's Terrace, a more elegant Chelsea address. The following year, Bram embarked on the Lyceum's first six-month American tour, one of many theatrical tours he would undertake over the next twenty years of his career with Irving. Florence accompanied him on one of the American tours, but otherwise, when he was away she would often return to Ireland for extended periods. On 13 April 1887 Florence and seven-year-old Noel were on a steamer bound for Dieppe that crashed into rocks off the French coast. Twenty people were drowned. For many years after the family visited the town to commemorate the rescue.

In 1904 Florence converted to Roman catholicism, and it can be presumed, had been involved with the religion for some years before this (W. S. Gilbert chided her in a letter in 1901: 'God bless you & make you a good protestant some day' (quoted in Murray, 2004)). She was also, along with her husband and his brother Thornley, an advocate for Home Rule in Ireland, and counted John Dillon and his wife Elizabeth as friends.

Reports of Florence and Bram's relationship vary. While many say that they were well-matched, others have characterised their relationship as distant and cold. Throughout her biography of Bram Stoker, Barbara Belford suggests that Florence had extravagant tastes (exemplified in their house moves, and her active social life and shopping trips to Paris) that put a financial strain on her husband, keeping him tethered to his theatre work to the detriment of his writing.

Daniel Farson, Bram's grand-nephew, made the claim in his Stoker biography that the couples' marriage was frigid and loveless, that Florence ('the cold, flirtatious beauty in the fox-fur', 213) refused to have sexual relations with her husband after the birth of their son and that her husband took to visiting prostitutes. Indeed speculation as to Bram's sexual predilections (including potential homosexuality) have filled volumes, largely due to the sexually charged nature of some of his work, particularly Dracula, his greatest literary achievement, and the insinuation that he died from syphilis (perpetuated by Farson but now widely refuted).

Henry Irving died in 1905 and early the next year Bram Stoker suffered a stroke which left his gait and eyesight permanently damaged. He was also suffering from gout and Bright's disease – a kidney complaint. He was often bedridden and Florence nursed him. To save money they moved from their large Chelsea home to a smaller flat. Without his theatrical employment, Bram maintained his family through the proceeds of Dracula and through journalism, working for titles including the Daily Telegraph and the World (New York), for which he wrote a series of profiles of notable people. Bram would suffer a series of strokes, becoming increasingly debilitated until he died in April 1912 attended devotedly by Florence. During those final years, the Stokers were often short of money. In a letter to his brother Thornley, Bram stated that: 'It is harder on poor Florence (who has been an angel) than on me … She had to do all the bookkeeping and find the money to live on—God only knows how she managed' (quoted in Belford, 315).

Bram left everything to Florence (amounting to some £4700). Upon the death of her brother-in-law, Sir Thornley Stoker, a few weeks later, she also inherited his bequest of £1000 to Bram. The following year she auctioned off various collectible items including her husband's original manuscripts, a collection of David Garrick letters and a death mask and hands of Lincoln, earning an additional £400.

As manager of his literary estate, in 1914 Florence published the story collection, Dracula's guest, which Bram had compiled before his death and for which she wrote a preface. Then in 1922, she learned that a German film company called Prana-Film had released an unauthorised adaptation of the Dracula story titled Nosferatu. Despite changes to character names the copyright infringement was undeniable, and with support from the British Incorporated Society of Authors, a determined Florence entered a gruelling three-year legal battle demanding financial reparation and the destruction of all copies of the film. She ultimately won her case, but some copies of the film remained in circulation. It is unknown if Florence herself ever actually saw Nosferatu.

She granted the actor Hamilton Deane, a contemporary from Dublin with Clontarf connections, permission to produce a stage version of Dracula, which premiered at the Grand Theatre in Derby in July 1924. It was widely derided by critics but audiences loved it, and it enjoyed great touring success for many years. Bela Lugosi took the title role for 261 appearances on the New York stage from summer 1927, before touring America with it. Lugosi was then the first 'official' onscreen Dracula in Tod Browning's 1931 film, a role with which he would become synonymous. Florence was paid $40,000 for the film rights, which coupled with her earnings from the stage version, allowed her to live out her final years in comfort.

She continued her busy social life for as long as she could, spending time in the summers with her son Noel, who became a chartered accountant, and his family on the Isle of Wight. He described her as 'still a very beautiful woman in middle age and when she was seventy-five' (quoted in Belford, 326). Florence Stoker died of colon cancer at home at Kinnerton Studios, Knightsbridge, on 25 May 1937, leaving an estate of £20,000. She was cremated at Golders Green cemetery in north London, and her ashes were spread at the cemetery rather than being interred with her husband (Noel took her place with Bram in 1961).

Florence Stoker did much to promote and protect the integrity of Bram's work, leaving a rich legacy for later generations. In death, however, she was still overshadowed by the men in her life who had long predeceased her. Amongst the Stoker family papers held at TCD is a short newspaper clipping of an agency piece on the death of 'Mrs Bram Stoker'. Of its 129 words, seventeen are about Florence (giving her name, her father's name and the year of her marriage), the rest are divided between Henry Irving and her husband.

Her likeness was sketched by Oscar Wilde and later by pre-Raphaelite artist Edward Burne-Jones, and painted by Walter Frederick Osborne.