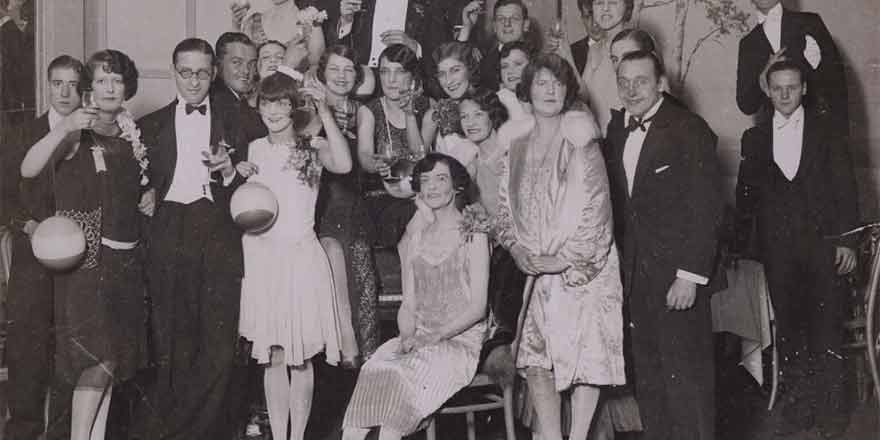 To mark the publication of our latest batch of 'missing persons', we publish the entry on Kate Meyrick by Margaret Elliott, below. Seated centre in the image above from 1928, Meyrick dominated the London nightclub scene through the roaring 1920s. She is among the sixty-six new 'missing persons' newly added to the DIB (nearly half of whom are women).

Kate Evelyn Meyrick (1875–1933), London's 'queen of the nightclubs', was born on 7 August 1875 at 24 Cambridge Terrace, Kingstown, Dublin. She was the third daughter of John William Washington Nason, a medical doctor, and Sarah Frances (née Bateman). Kate's father died of meningitis when she was just six months old. It was the second tragedy to strike the family as they had already lost an infant daughter in 1873. In June 1880 Sarah married Rev Edwin Sandys Jackson and moved to England with Kate and her surviving sister Ethel Frances, to live at the rectory in Great Sankey, Lancashire. In late 1882 Sarah died, and the two sisters returned to Ireland to live with their maternal grandmother Isabella Bateman and two grand aunts, at 'Fairyland', York Road, Kingstown.

According to her own memoirs, Kate was a wayward child who disliked convention and was more interested in climbing trees than in her lessons. Educated by governesses until the age of sixteen, she then attended Alexandra College from October 1891 to May 1893. Her desire for adventure continued, resulting in her unsubstantiated claim to be the first woman to ride a bicycle in Ireland. Shortly after leaving Alexandra College, she abandoned her plans to become a doctor and threw herself into fashionable Dublin society. On 12 December 1899 she married Ferdinand Richard Holmes Merrick, a doctor specialising in psychiatric medicine, and the ceremony was performed by her stepfather in St John's church, Monkstown. After a short time living on Palmerston Road, Rathmines, Dublin, the couple moved to England and settled in Southsea on the Hampshire coast, where their first child, Mary Isabel, was born in 1900. They also appear to have changed the spelling of their surname after the birth of their second child, Dorothy Evelyn, in 1902, as their six subsequent children were registered under 'Meyrick'. The marriage, however, was not a success. By 1910 Kate Meyrick had filed for divorce, accusing Ferdinand of cruelty and adultery. The petition was dismissed and the couple reconciled, their daughters Lillian Agnes and Gwendoline Irene being born in 1912 and 1914 respectively. The reconciliation was brief, and the couple separated in 1918. Although divorce proceedings were initiated by Kate Meyrick in 1920, and Ferdinand in 1921, it appears these attempts were unsuccessful and they remained married, albeit in name only.

Shortly prior to this Meyrick had taken the first steps on the road to her glittering and notorious career as the 'queen of the nightclubs', becoming a partner in a new club, Dalton's, that opened at 28 Leicester Square in April 1919. She claimed that the reason for her somewhat unusual choice of career was that she was determined to provide financial security for her young family. Dalton's was soon followed by the Bedford, then Brett's, but it was the infamous 43 club (later renamed Proctor's) situated at 43 Gerrard Street, Soho, opened in November 1920, which became the star of her ever-shifting nightclub empire. In total Meyrick went on to own or hold an interest in around nine clubs but the 43 was her longest running enterprise.

With their heady mix of illicit drinking, gambling, drugs and prostitution the nightclubs of Soho thrived during the decade after the first world war. The generation of the 'bright young things', desperate to escape the tedium of conventional society, flocked to such venues. One of the chief draws of the 43 appears to have been Meyrick herself. Seated behind her desk in the front office, she collected door money and effectively vetted the clientele, a rite of passage which was an adventure in itself. Once inside it fell to the dance hostesses, nicknamed 'Meyrick's Merry Maids', to entice the customer to spend lavishly and while away the night listening to the world's greatest jazz artists. Running the club was not without risks, Meyrick herself was physically attacked on at least one occasion by London gangsters. During the Irish war of independence Meyrick records that factions of Sinn Féiners and Black and Tans would menace the club. Members of the IRA memorably celebrated the successful theft of machine guns from Chelsea Barracks in November 1921 by ordering drinks all round at the 43, the stolen weapons stacked in a vehicle outside.

Meyrick, despite her short stature and diminutive physique, had an uncanny knack of disciplining rowdy and drunken crowds. Observing that her normally hard-headed customers would empty their pockets in the pursuit of pleasure, Meyrick did not spend much on extravagant decorations in the majority of her clubs. The 43 was sparsely furnished, dingy and full to capacity at eighty people, the crowded and sleazy atmosphere adding to the thrill. The one exception was the Silver Slipper on Regent Street, with its illuminated glass dance floor and glass doors engraved to look like spider webs.

Meyrick's businesses, though often short lived, were highly lucrative. By her own estimation, between 1919 and 1932 around £500,000 passed through her hands. On the night of the Oxford–Cambridge boat race in 1927 Meyrick recorded takings of £600. Yet at her death, she left an estate of only £771 8s 1d. The money, she says, had been spent on cost of living, running her clubs, educating her children and legal fees. The transient nature of the clubs was largely a result of the effects of police raids. To turn a profit Meyrick flouted strict licensing laws. She also seems initially to have turned a blind eye to prostitution and drug taking which allegedly occurred at her clubs. Once a conviction had been achieved the club's license was revoked, but Meyrick refused to be cowed and simply reopened the business under a different name. Exhibiting a fine contempt for the law, as one Bow Street magistrate opined, Meyrick was imprisoned five times over the course of her career, in 1924, 1928, 1929, 1930 and finally in 1931, spending a total of three years in Holloway. In an attempt to mitigate the disruption caused by police raids and from London gangsters, she bought protection from the Sabini gang. She also entered into an arrangement sometime before 1924 with a Sergeant George Goddard of 'C' division, the section of the metropolitan police responsible for policing nightclubs in Soho. Whilst police protection did not give Meyrick complete immunity from raids, it is notable that between 1925 and 1928 undercover police reported no illegal activities at the 43 as she received tip-offs from Sergeant Goddard in advance. This allowed her to weather the effects of the war against the nightclubs led by conservative home secretary William Joynson-Hicks between 1924 and 1929. His campaign, supported by the chief of the metropolitan police, William Horwood, and the bishop of London, along with organisations such as the British Social Hygiene Council, chimed with the growing concern for public morality. Celebrated cases such as the death of Freda Kempton, one of Meyrick's Merry Maids in March 1922 of a cocaine overdose, served only to heighten these fears.

Attempts to regulate the 'plague spots of London' as Joynston-Hicks called the clubs, were hampered by the lack of police powers. Reduced to gathering evidence by posing as customers, the metropolitan police struggled to get convictions and raids appear to have become part of the appeal for the nightclub clientele. In 1924 customers taken up in a raid on the 43 were reported to have travelled to Vine Street police station singing and laughing. The clientele according to Meyrick's memoirs was drawn from all ranks of society and backgrounds. Royalty, including the king of Denmark and Prince Christopher of Greece, rubbed shoulders with authors such as J. B. Priestley, Evelyn Waugh and Joseph Conrad, and celebrated actors and jazz musicians like Rudolf Valentino, Tallulah Bankhead and Harry Gold. Meyrick was proud of this diversity, commenting that appearance and smart evening dress was no indication of a person's character or habits.

The golden times, however, were not to last. In March 1928, prompted by complaints from Joynson-Hicks, the 43 was raided by the flying squad without the knowledge of Sergeant Goddard, and in December Meyrick was arrested under the prevention of corruption act for allegedly bribing him not to raid her. Despite having a salary of only £6 per week, Goddard was found to have assets of around £18,000, £12,000 of which was in bank notes, some of which could be traced back to Meyrick and her co-defendant, Italian restaurateur and brothel keeper, Luigi Ribuffini. Following a highly publicised trial Meyrick was found guilty and sentenced to fifteen months hard labour. During her absence her family continued to run her clubs but the absence of 'Ma Meyrick' had a dampening effect on the atmosphere, her manager, Richard Carlish, stating that the magic departed with its hostess.

Following her early release from Holloway in January 1930, family and staff celebrated her return with a lavish party as had become traditional. But the year in prison had taken its toll on her finances as well as her health. She was convicted on two further occasions in 1932, receiving a fine of £50 and was placed on probation for three years. This effectively ended her personal involvement in the running of her clubs. Ever the self-publicist, Meyrick wrote her memoirs, starting while she was in Holloway in 1931, and they were published posthumously in 1933. Unsurprisingly the publication was the subject of intense media interest aided in part by objections by raised by J. B. Priestley, who claimed never to have patronised Meyrick's clubs, which resulted in a temporary recall.

Kate Meyrick died of pneumonia at the residence of her son-in-law, the earl of Kinoull in Park Square on 19 January 1933. Her estranged husband, Ferdinand Meyrick, was present at her lavish funeral at St Martin-in-the-Fields. Efforts to continue her nightclub business after her death foundered as her children lacked her magnetic personality and flair. However, on the whole she had achieved her ambition of securing the fortunes of her large family. Three of her daughters married aristocratic husbands and her youngest son, Gordon Holmes Meyrick, achieved a brief success as a crime writer before his untimely death in October 1943. Immortalised in the works of Evelyn Waugh and Anthony Powell, Kate Meyrick had lived life to its fullest, defiant of the legal and social codes which defined her era. For it was in her nightclubs, so much a feature of the fast hedonist environment of the roaring twenties, where she records she found the 'joy of living at highest pressure' (Meyrick, Secrets, p. 102).

Image: courtesy of the National Portrait Gallery, London, under a CC BY-NC-ND 3.0 license.