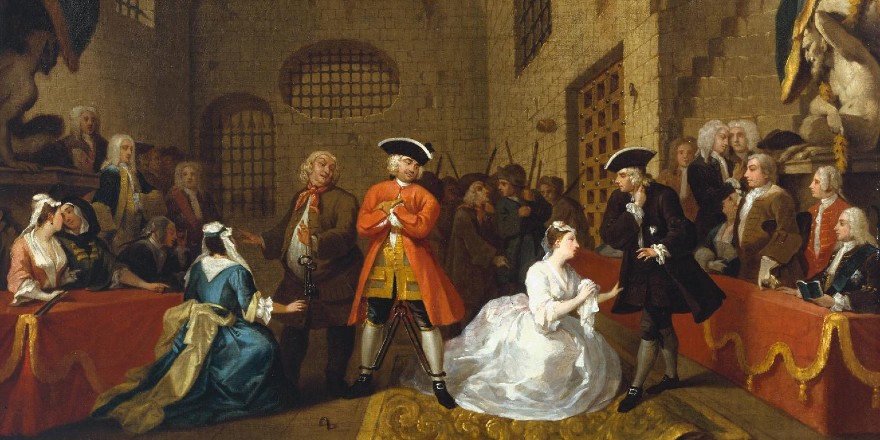 Another fascinating missing person recently added to the DIB, Mary Young (aka Jenny Diver), was a thief from the north of Ireland who gained notoriety as head of a gang of pickpockets in early 1700s London.

Mary Young ('Jenny Diver') (c.1704–41), notorious pickpocket and head of a criminal gang, was born c.1704 in the north of Ireland. There are no extant records relating to Young's early life so most accounts rely on the text published by James Guthrie, The ordinary of Newgate. Guthrie, a clergyman ('ordinary') appointed by the City of London to tend to people confined in Newgate prison, released an account of the criminals who were executed at Tyburn in 1741 (although the original text mistakenly gives the date as 1740), and among them was Mary Young, alias Jenny Diver, alias Webb, alias Murphew (The ordinary of Newgate, 6–9, 1001–17, 2005–13). It has been widely agreed that the account of Young's life contained within Guthrie's text is most probably authentic, given its use of criminal cant: of the eighteen different cant terms contained within it, eleven were published for the first time, implying that the account did not rely on previous glossaries or dictionaries. If, as seems probable, Young dictated her biography to Guthrie, she was very forthcoming about her criminal career but considerably less so about her origins.

In his account, the ordinary states that Young was about thirty-six years of age at the time of her execution, which puts her date of birth as 1704 or 1705. She was born in Ireland but called herself an English woman, being unwilling to declare either her country or family to anyone. It appears that Young was the illegitimate child of a lady's maid, Harriot Jones, who gave birth to the child in a brothel and died shortly afterwards. When she was about ten years of age Young was taken in by an elderly gentlewoman, who she refers to only as 'Nurse', and under her care was educated in reading, writing and needlework, excelling in the last.

About 1720 Young left Ireland, sailing for Liverpool with a plan to earn her living from needlework. The venture was financed by an unnamed young servant who, professing his love for her, stole eighty guineas and his master's gold pocket watch in the hope that they would be married in England. He was, however, recognised in Liverpool, arrested and sent back to Ireland for trial (where he was sentenced to death, but had the sentence commuted to transportation). Young, unnoticed in the melee, was free to take a wagon to London, where she found lodgings in Long Acre, near Covent Garden, with Anne Murphy, her 'countrywoman' and leader of a gang of pickpockets. According to Young, when she failed to make a living with her needle Murphy introduced her to the other members of the gang, having first sworn her to secrecy. This was probably about 1725, since Young is described as having a career as a pickpocket for fourteen or fifteen years in Guthrie's account. Her first job was to 'stand Miss Slang', that is, stand a safe distance away so as to receive goods stolen from 'cheving the froe', which means cutting off women's pockets. Their haul that first evening was two diamond belt buckles and a gold watch, which they fenced for £70. For her part in the evening, Young received ten guineas.

Having discovered this lucrative way of life, Young dedicated two hours every day to practicing pickpocketing and learning cant with one of the gang members, becoming so attached to her teacher that they 'agreed to live together as man and wife'. According to Guthrie, Young became so skilled that she was acknowledged head of the gang in place of Murphy and given the name 'Jenny Diver' or 'Diving Jenny'. There is some confusion as to whether Young took her alias from the character 'Jenny Diver' in John Gay's The beggar's opera (1728), or if Gay based his character on the real-life Young, but the former seems more probable (the above painting is William Hogarth's portrayal of act III, scene XI from the play). In 1728 Young had only been thieving three years and there is nothing to suggest that she was well-known; indeed, the first mention of her as 'Jenny Diver' is in the London Daily Post in 1738, some ten years after the play was completed, and Guthrie's account was published three years after that.

As head of the gang Young became 'one of the most artfullest pickpockets in the world' (Guthrie, 1007), using a variety of imaginative and colourful methods of divesting the wealthy of their goods. One of her favourite ploys was to attend a church or theatre in a supposed state of advanced pregnancy. A pair of false arms and hands rested serenely upon her swollen abdomen while her real hands were free to secrete watches, purses and jewellery beneath her vast hoops. She also pretended pregnancy to feign illness, collapsing outside the houses of the wealthy and stealing their moveable valuables while they went to fetch aid; or fainting in the park, allowing the gang to pick the pockets of those offering her assistance. Another of Young's ruses was the so-called 'badger game' where a gullible young gentleman, or 'spark', was lured to her bedchamber with the promise of sexual favours. Once the eager lover had removed his clothes and valuables, a member of the gang would burst in declaring Young's husband had returned unexpectedly. The unsuspecting victim was instructed to hide naked beneath the bedsheets while the gang made their escape.

Under Young's leadership the gang prospered for several years, organised around a strict code of behaviour: no one was admitted to the gang without the consent of all; no one acted without the consent of all (around five members); new members were subject to a month's trial; all members must learn cant; if any were arrested the others would provide character references in the trial and, finally, a tenth of all proceedings was put aside to support those injured or unable to work.

According to Guthrie, Young was arrested and transported at least twice in the decade before her execution but, because of her use of aliases, it is difficult to say if this is accurate. In 1733 a Margaret Webb was sentenced to transportation to America for pickpocketing a gentleman, while in 1738 a Jane Webb was transported to America for picking the pocket of a Mrs Rowley. While the former cannot be verified, the alias and timeline fit with Guthrie's account. The second conviction is definitely Young, since the Old Bailey proceedings in 1741 state that she had a previous conviction under this name. 1738 was also the first time the name 'Jenny Diver' was publicly ascribed to her, the Newcastle Courant among other publications stated that 'the famous Jane Webb alias Jenny Diver' was convicted at the Old Bailey (29 Apr. 1738).

On 15 January 1741 Young and an accomplice, Elizabeth Davis, were arrested for stealing thirteen shillings from the pocket of Judith Gardner. They were held in Newgate until their trial on 17 January, when both were found guilty and sentenced to death (Davis's conviction was later commuted to transportation). Young immediately 'pleaded her belly' but, not being found pregnant, was returned to Newgate to await execution. According to Guthrie, Young's final days were spent visiting the chapel and appearing very penitent for her past. He also says she was visited on the eve of her execution by a woman who had nursed her child. This is the only mention of a child in extant records and although neither gender nor father are revealed, Guthrie does say the child was about three years of age and living on Little Britain Street. This would tie in with Young's 1738 conviction where, as Jane Webb, she spent four months in Newgate before being transported. The delay was possibly to facilitate the birth of a child.

On Wednesday 18 March 1741 nineteen people were hanged at Tyburn, one of the largest multiple executions in the eighteenth century. In deference to her wealth and notoriety, Young was brought by mourning coach whilst the others travelled in open carts. There had been rumours that her gang would attempt a rescue, so soldiers were posted as the carts made their way through the unruly crowd, Guthrie described them throwing brickbats and mud at the prisoners as they passed. Mary Young, along with three other women and fifteen men, was hanged just after midday. Her body was immediately cut down by her friends and conveyed to an unmarked grave in St Pancras old churchyard, apparently to prevent it falling into the hands of 'dissectionists'. Her choice of graveyard has led some to speculate that she was, in fact, catholic, as this was one of the few graveyards where catholics were accepted. However, all evidence points to the contrary. She attended chapel in the prison as a protestant, she was given the 'holy sacrament' the morning of her execution by Guthrie, the ordinary of Newgate, and she was accompanied in the coach by Rev. Thomas Broughton, a methodist minister. Although her grave is unmarked, there is an entry in the burial register for 19 March 1741 under the name 'Jane Young'.