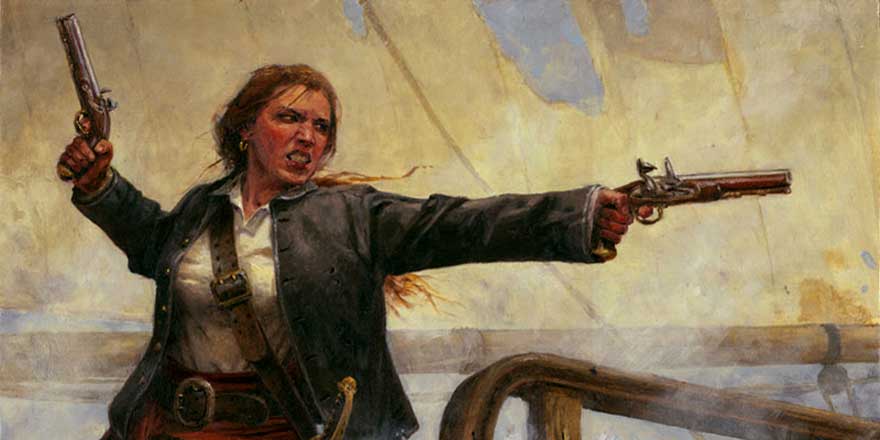 To celebrate the publication by the Ulster Historical Foundation of Transatlantic lives: the Irish experience in Colonial America, we publish the DIB entry on Anne Bonney, by Frances Clarke.

A collaboration between the RIA and the Ulster Historical Foundation, Transatlantic Lives collects 60 lives from the RIA's Dictionary of Irish Biography. Edited by Dr Linde Lunney, Dr James Quinn, and Dr William Roulston, the book was published in August 2019. Detailing the careers of a selection of Irish emigrants to North America in the colonial period (including the British territories that would later become Canada), the book is available to order online.

To mark this publication Dr Lunney is giving a talk, entitled 'Connections and coincidences in emigraton' at PRONI, Belfast, at 1pm on Friday 15th November, more details here – booking required.

Bonney (Bonny), Anne (d. 1782), pirate, was born in Co. Cork, the illegitimate daughter of William Cormac, a wealthy Cork lawyer, and his maidservant. According to Daniel Defoe, her first biographer, she was disguised as a boy during early childhood in order to conceal her identity. Later, to avoid local censure, Cormac took the mother and child to South Carolina where, prospering as a merchant, he acquired a substantial plantation. Anne grew up in the colonies as an independent and strong-willed young woman who, on one occasion, was reputed to have murdered her English maid with a case knife.

In 1718, when she married a poor seaman, James Bonney, her father turned her out of the house and the couple moved to New Providence in the Bahamas in search of employment. There Bonney became acquainted with a group of pirates, led by Captain John Rackam, better known as Calico Jack, with whom she later eloped and had a child, whose history is unknown. Disguised as a man on board ship, Bonney took part in raids off Cuba and Hispaniola, joining English-born Mary Read (c.1695–1721), another female member of Rackam's piratical crew. On 5 September 1720 the governor of the Bahamas issued a proclamation reporting the theft by Rackam and his associates of an armed twelve-ton sloop from Providence, which was subsequently used for acts of piracy and robbery. The proclamation was published in the Boston Globe and, the following month, the vessel was intercepted off the Jamaican coast. The crew, including Bonney and Read, were captured and imprisoned in Spanish Town. On 16 November Rackam and his male accomplices were tried at a vice-admiralty court, where they were condemned and hanged two days later. On 28 November, at a separate trial in Spanish Town, Bonney and Read were tried for piracy. Although both women pleaded not guilty, the evidence of witnesses was incontrovertible. It was claimed that Bonney and Read were neither kept nor detained by force but that they engaged in piracy of their own free will. Eyewitnesses stated that the two women, disguised in men's clothing, were each armed with a machete and pistol and that, as one of the last defenders of the ship, Bonney was very active on board and willing to do anything.

Although pleas of pregnancy saved both women from the death penalty, Read died in prison and was buried in the Jamaican district of St Catherine on 28 April 1721. William Cormac, however, apparently secured his daughter's release from prison and Bonney returned to Charles Town, South Carolina, where she gave birth to Rackam's second child. In December 1721 she married local man Joseph Burleigh and the couple had eight children. Bonney died, aged eighty-four, in South Carolina on 25 April 1782. The exploits of Bonney and Read were dramatised by playwright Steve Gooch in The women pirates (1978), where they are portrayed as two women escaping from female stereotypes within a small group of anti-colonial rebel pirates.

Image courtesy of: Anushka.Holding is licensed under CC BY-SA 4.0