In the third instalment of this series we witnessed ‘Battling Andrew’, an Irishman at the Carolingian court, being mocked in a poem by Theodulf of Orleans for his pronunciation of Latin. Contrary to what modern scholarship has tended to assume, however, we found that this can have had nothing to do with Andrew’s Irish accent. In today’s instalment we investigate what is instead the real explanation. It turns out to be somewhat revealing, telling us a lot about individuals’ unconscious attitudes towards being Irish: Andrew’s own, but also that of at least one of the modern scholars who have analysed the poem.

The clue would appear to lie in what we can deduce of Andrew’s mentality from the passage we began to look at last time. As Professor Keith Sidwell has pointed out, it is a little odd that Theodulf’s otherwise densely-packed poem should ‘spend two lines on giving examples of the occurrence of the letter c. The point is made quite succinctly without them.’ The explanation can only be that there was a reason for selecting those particular items, namely the Latin words caelo, scando, ascensu, and amicitiis. As Sidwell says, these words have been chosen because when decoded into a sentence, in the same order that they appear, but with the necessary grammatical changes, they proclaim Andrew’s motives for being at court, and his way of accomplishing his aims: ‘to heaven he ascends by a ladder of patronage’. Sidwell’s conclusion is that scholars more genuine than Andrew ‘strove by their learning to beat off the coils of mortality’. In contrast, Andrew’s ‘way to heaven is by cultivating friendships, rather than by the acquisition of true learning.’ We are now in a position to go further: we can use Sidwell’s insight into Andrew’s obsequious mentality to explain his strange way of pronouncing Latin, the detail of which we were able to clarify from a linguistic perspective in last week’s instalment.

When Andrew first arrived from Ireland, he would correctly have identified himself as a Scottus, pronouncing the c with a k-sound. Like his genuinely learnèd and respected fellow expatriates, such as Cellanus and Frigulus in the seventh and eighth century or Sedulius Scottus and the genius Iohannes Scottus Eriugena (‘John the Irish-born Gael’) in the ninth, he would also have pronounced all other Latin words that were spelled with a c (such as scientia, ‘knowledge’) using the same hard sound [k]. As a matter of fact, these individuals were correctly preserving Classical Latin pronunciation in doing this; but it would have sounded foreign to Continental Latin speakers of the time. However, it did not make the Irish figures of fun; why should it have? Beginning with St Columbanus (d. 615), it was the Irish who had been establishing a network of monasteries across western Europe in a fashion that did much to keep Latin learning alive on the Continent during troubled times. We know from the Venerable Bede that, already in the seventh century, Ireland was a favoured destination for scholars from England (as, indeed, it became for intellectuals among the locals at the Carolingian court, the Franks) because such good training in advanced study was to be had here. And in succeeding generations it was learnèd men from Ireland, along with Englishmen trained in the same intellectual milieu such as Alcuin, who provided a large part of the impetus for the Carolingian cultural renaissance. This included a project to standardise Latin pronunciation throughout the Empire; it would be strange if Charlemagne had allowed the task to be influenced by a people collectively regarded as eejits! The Irish in general, then, were held in high esteem ...

The dangers of hyper‑correction (a.k.a. trying too hard)

… and, in any case, a recognisably Irish pronunciation of Latin is not what Andrew was being criticised for. As we saw in Part III, the way he talked was more different from the Irish way than the Continental way was: where the Irish only had a hard pronunciation for the letter c, and the Continentals had a mixture, Andrew used only the soft variety. The reason for this is depressingly clear, given his sycophantic nature: he was trying to imitate the locals so as to fit in, and was overdoing it, fooling nobody. Realising that his Irish pronunciation of a word like scientia with a k-sound distinguished him as a foreigner, he had switched to the s-type sound, and then applied this principle to the way he pronounced all instances of Latin c, in all positions (including within the word Scottus), in a manner not used by anyone else. Far from blending in, he was now marked out as an Irishman who was pretending not to be one: someone whose other behaviour, too, showed that he saw himself as having risen above what he doubtless viewed as Irish parochialism so as to become instead a citizen of the cosmopolitan world, free from insular limitations. In reality, of course, the only thing that Andrew had freed himself from was a claim on anyone’s respect. To sum up: as an Irishman, Andrew came from a culture that was held in high regard in his hosts’ domains, that had done much (and would do much more) to enrich the intellectual life of the Continent, and that already boasted the earliest and largest body of vernacular literacy in Europe. Turning his back on all that, Andrew tried to impress the authorities in his adopted country by attempting to assume their mode of speech. Failing spectacularly, he impressed them only with his insincerity ...

… and we know that that is the correct interpretation, because Theodulf actually tells us so. However, that fact has become disguised in subsequent scholarship.  Last week it was stated that one clause in the poem had been translated ‘along the following lines’:

However different he may try to be, he is nothing but a Scottus.

The translation in question, by a very respectable twentieth-century Cambridge academic, actually went further, by including an English rendering of the final word Scottus; the upshot was that the line had Theodulf seeming to say that Andrew was ‘nothing but an Irishman’. This reads as an anti‑Irish slur, an effect accentuated by the aforesaid academic’s translation of the target of the slur (hic in the original) as simply ‘an Irishman’ in generic terms — the whole thing then amounting to a sentiment of a kind that is all too familiar to us today. However, there is actually no generalised anti-Irish animus in the original passage from Theodulf! The impression of such an animus is only a mirage, resulting from two inaccuracies in the Cambridge man’s translation. First, the pronoun hic is really quite precise in the poem and should be rendered as ‘this man’ (as we did last week), so as to refer to Andrew specifically. Second, the phrase nil nisi Scottus erit should not, in fact, be translated as meaning that the individual in question ‘is nothing but’ an Irishman, but rather that he ‘will be nothing if not’ one. What Theodulf is really saying to Andrew is: Get over yourself, man. You’re an Irishman: stop dissembling, and be proud of it! There’s plenty of reason to be …

All this goes to show how old the ‘West-Brit’ syndrome actually is — and also, perhaps, how even modern scholarly translations can unwittingly perpetuate spin. In the next instalment we shall look at a document embodying a language policy for European union, as duly published in Strasbourg, the historical consequences of which have been a thousand times more significant than could ever have been anticipated. In the meantime, renewed thanks for reading — and feel free to get in touch with the author (A.Harvey@ria.ie), at the Royal Irish Academy’s Dictionary of Celtic Latin project. Guess whether or not we are still busy drafting, in spite of the lockdown! 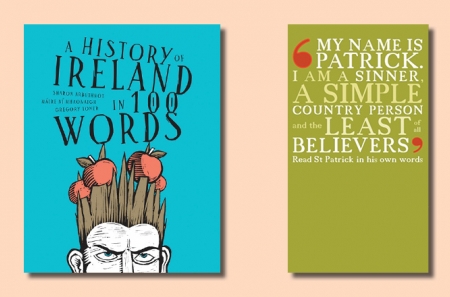