Yes, but how can we know?

With the case of Battling Andrew and that of the Strasbourg Oaths we have now looked at two scenarios with a continental, Carolingian setting. In each case we have been able to gain an insight into the historical situation by looking at the relationship between how words were pronounced and how they were spelled. Key to such investigations is the realisation that, faced with any word in a historical document, in whatever language, it is no use simply reading it out from its spelling in some sort of phonetic fashion (as is so often done, even by leading academics) as if the pronunciation were of no account. This is really, really important! If we had failed to consider what the letter c actually meant to an Irishman in Battling Andrew’s time, we’d have missed the fact that he was being criticised for not adhering to his native pronunciation, and would instead (like the Cambridge academic) have concluded — quite wrongly — that Theodulf was anticipating modern stereotypes by mocking the Irish in general. If linguists such as Roger Wright had failed to consider how an ordinary Latin text would have been pronounced in ninth-century Strasbourg, the realisation might have been lost that the first-ever document written in French was drawn up for reading out by a German speaker. But all of this prompts the question: if we can’t arrive at the historical pronunciation of words directly from how they are spelled, then how can we arrive at it? In the absence of medieval tape‑recorders, how do we avoid begging the question? The answer is, by carefully and systematically triangulating backwards from the pronunciation of modern languages and dialects that are known to be the descendants of the target, historical tongue, and seeing where the lines intersect. It is exactly analogous to the method that scholars use to produce an edition of any medieval or Classical written text that had a single author: one collates the readings from all the different manuscripts, deduces the stemma (which is of course the family tree that shows the interdependence of each of these), and so, painstakingly, recreates what must have proceeded from the original writer’s pen.

In retrieving the pronunciation of medieval texts this is not too difficult if, like the Strasbourg Oaths, they come from the ex‑Latin, Romance‑speaking parts of Europe, because we have some firmly established fixed points. One is the original pronunciation of Latin itself. We should never believe anyone …

… who tells us that Latin is a dead language. Already by the end of Roman imperial times, Latin had become much more than just the official and military tongue of the western continent of Europe; by and large, in its various registers, it had become the language of the people, from the highest to the lowest and — this is the point — in a real sense it still is. From Portuguese, Galician and Castilian Spanish in the west, through Catalan, Sardinian, standard French and Occitan to the Romance dialects of the Alps and standard Italian, and even to the surprisingly surviving, isolated Romanian in the east, the language spoken at everybody’s family dinner table today can be traced back organically and without a break to the tongue of the Romans, their procurators and legionaries. Of course, there have been massive alien influences on the language since then — one could say that this is the main reason why the various Romance tongues are nowadays different in the ways they are. For example (to be absurdly simplistic about it and to identify only the main influences in each case), Spanish can be seen as Latin plus two thousand years plus Arabic, French as Latin plus two thousand years plus Germanic and Celtic, Romanian as Latin plus two thousand years plus Slavic. Italian is Latin plus two thousand years of Italian history, and in many ways Sardinian is Latin plus, perhaps, not very much at all — the family dinner on the table, spelled in Classical Latin cena, is still pronounced [ke:na] in Sardinia today (asssibilation still hasn’t caught up with them there!) But the thing is that each native speaker of each of these languages has, by definition, learned it as his or her home speech. The word for water may be agua in Spain, acqua in Italy, apa in Romania and eau in France, but each of these descends seamlessly from Latin aqua, and not one of the millions of users of these words in those places can consciously remember having to learn it. In this sense, today’s Romance languages are modern dialects of Latin, and tens of millions of Europeans are native Latin speakers, to say nothing of the people of Central and South America. With this many modern versions to triangulate back from, plus the evidence of loanwords from and into other languages (such as Welsh) that aren’t themselves part of the Romance family, it hasn’t been difficult for historical linguists to reconstruct the pronunciation of Classical Latin firmly. It is from this research that we derive, for example, the knowledge that the letter v was pronounced like an English w. And with this original pronunciation as the starting point, two thousand years ago, and whatever is the local version of Romance these days in any particular area, such as Alsace, where Strasbourg is, and with both of these being known to us, it is really just a question of working out where the pronunciation of any particular historical text, such as the Strasbourg Oaths, should be located along the linear, chronological spectrum that runs between the two historical end‑points. So we are not over‑dependent on the spellings in such texts when trying to work out their pronunciation; we are not begging the question. Indeed, we are in the happy position of being able to use our knowledge of the pronunciation, independently arrived at by the process just described, actually to apply the logic in reverse, using it to analyse why any particular spelling was used on any particular occasion. When you think about it, it is in fact that second move that confirms the traditional but romantic‑sounding claim about the kings’ having swapped languages when swearing the Oaths: only if the claim is true does the text’s use of the novel, proto-French orthography make any sense!

That kind of argument may be all very well, at least as regards Latin and its derivatives; but what about the situation with languages where there is no documented starting point such as the Romance languages have in Classical Latin? The Celtic family of tongues is in this situation; we shall briefly investigate that next, because of course the national language of Ireland is one of those affected.

As is well known, the surviving Celtic tongues fall by typological linguistic and historical criteria into two groups, the Gaelic and the Brittonic. As well as being represented by Irish here in Ireland, the first group comprises Scots Gaelic in Scotland, and the Manx Gaelic of the Isle of Man. At least as far as the written standard goes, the three members of this Gaelic group have in most respects diverged relatively recently — since the Reformation — from a common Gaelic standard which until that time was used across a geographical continuum hundreds of kilometres long stretching from the south-west of Ireland to the north-east of Scotland. The second group of Celtic tongues consists of Breton (found in Brittany and thus the only Celtic dialect now extant on the continental mainland), the resurgent Welsh in Wales and, in the extreme south-west peninsula of Britain, Cornish (which has been successfully resuscitated from death over the last hundred years but therefore is arguably artificial). Though even today there is a degree of mutual comprehensibility between them, these three — the Brittonic languages — have been perceptibly distinct from one another for about a millennium and a half. Nevertheless, with this many modern versions to work back from, plus sporadic written evidence from medieval times onwards, plus the evidence of loanwords borrowed inwards and outwards, it has proved possible, by careful triangulation conducted over many decades, to recreate with a lot of certainty the main features of an ultimate parent language, despite the timespan involved. While for Romance, as we have seen, the parent was Latin, for Gaelic and Brittonic it was what is known as Common Celtic. Though this was never written down, languages descended from it were at one time spoken across territory from modern Turkey to modern Spain, and everywhere north of the Alps and west of the domain of Germanic. So please don’t listen to anyone who tells you that there is no such thing as Celtic! It is fashionable in some circles to make that claim these days, but not among linguists. Never mind any links Celtic may or may not have with the geographical distributions of human DNA patterns or with la Tène material culture; as far as the language side of things goes, Celtic has been firmly established as a distinct branch of the Indo-European family on just as respectable a basis as, say, Germanic or Slavic.

That being the case, our final illustration of how linguistics can help the historian will be able to bring it all back home soundly enough by using an example from Ireland. In the meantime, many thanks as always for reading — and do get in touch with the author (A.Harvey@ria.ie), at the Royal Irish Academy’s Dictionary of Celtic Latin project! Next week’s instalment will be the last, and it may be possible to include within it a response to any feedback that has been received in time. 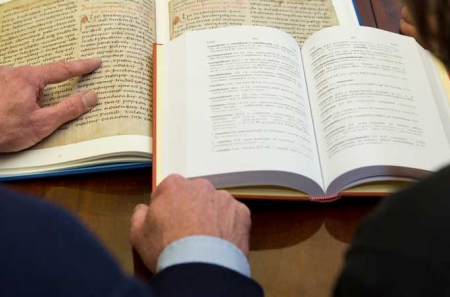