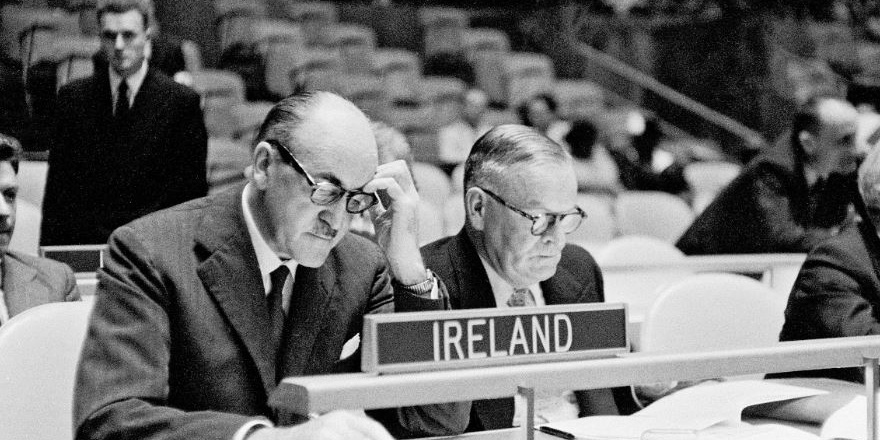 The recent release of the latest in the Documents on Irish Foreign Policy series received a good deal of attention in the national media; read our round-up of coverage here.

The eleventh instalment of Documents on Irish Foreign Policy, covering the period 1957 to 1961, was published on 13 November. Its contents cover the period when Éamon de Valera stepped down as Taoiseach, to be replaced by Seán Lemass, and some of the stories that they revealed received a good deal of coverage in the national media before and after the launch.

RTÉ’s Colm Ó Mongáin led with two items. The first was this online piece on the parallels between Brexit and the issues raised for Ireland by the reverse scenario sixty years ago: the prospect of the UK joining what was then the European Economic Community (EEC), while Ireland remained outside the bloc. He also explored in this TV report which went out on Monday’s Six-One News.

Given that the period covered by the volume was at the height of the Cold War, DIFP Executive Editor Michael Kennedy went on RTÉ’s Drivetime to speak with presenter Mary Wilson about Irish preparations for the prospect of nuclear war; listen back to it here (from 2 hrs 24 min 50 sec).

Stephen Collins covered a number of stories arising from the volume in The Irish Times on 13 November: the issues posed by Ireland’s attempts to join the EEC, along with efforts to persuade US President John F. Kennedy to visit Ireland early in 1961, and the attempts by the former German SS commander Otto Skorzeny (best known for rescuing Italian dictator Benito Mussolini from Allied captivity during the Second World War) to become a permanent resident of Ireland; he had bought a farm in Kildare, though ultimately Frank Aiken, as Minister for External Affairs, denied him a visa (the story was also picked up on by the Irish Mirror).

Two of the stories in The Irish Times related to Ireland’s new-found role at the United Nations in the early 1960s. In 1960 the veteran Irish diplomat Frederick H. Boland, as Chair of the UN General Assembly, broke his gavel while attempting to bring Soviet premier Nikita Khrushchev to order (Khrushchev sent Boland a case of wine by way of apology). In 1961 Ireland’s Conor Cruise O’Brien, as UN special representative in the Congo, ordered UN peacekeepers (including Irish troops) to forcibly retake the seceding province of Katanga; the diplomatic correspondence indicates that he did so on the orders of UN Secretary General Dag Hammarskjold. The Times’ coverage concluded the next day with this editorial drawing further parallels between past and present, as revealed in DIFP XI.

Image: Minister for External Affairs Frank Aiken and Ireland’s Permanent Representative to the UN, Frederick H. Boland, photographed prior to an afternoon meeting of the 12th session of the UN General Assembly in New York, 12 September 1957 (UN Photo TW/75201).