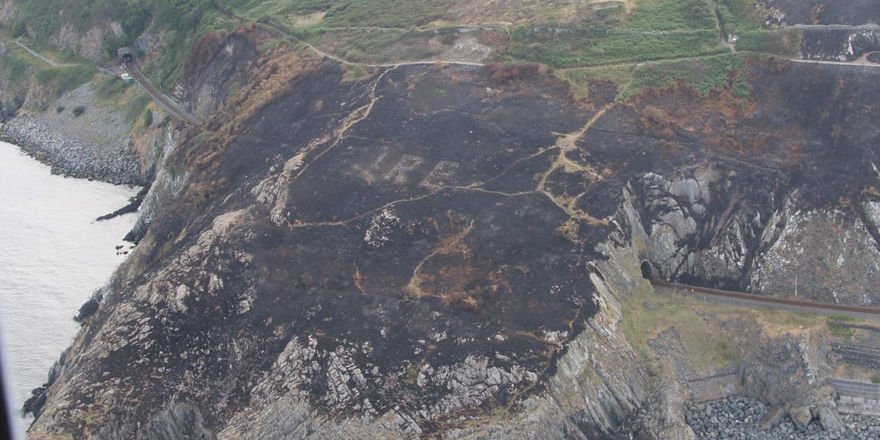 Éire signs and the 'Emergency'

The recent hot weather saw a number of archaeological remains come to light across the country, but a gorse fire on Bray Head revealed a remnant of the more recent past: a World War Two vintage 'Éire' sign.

The recent heatwave unveiled traces of a diverse range of ancient archaeological remains across the country, but another consequence of the hot weather (a gorse fire on Bray Head) revealed a remnant of the more recent past. The WW2-era 'Éire' sign recently spotted by the Air Corps (and pictured above) is one of over 80 that were dotted around the Irish coast during the 'Emergency', and some of them can be seen in this gallery of images of Irish lighthouses from the 1940s, held by the Military Archives. The sign on Bray Head naturally got a good deal of attention, so here is a short overview of the origins of the signs, along with a few pointers for those who want to find out more.

The ‘Éire’ signs were erected around the Irish coastline from the summer of 1943 onwards, a period when overflights of Irish territory and forced landings of belligerent aircraft (mainly Allied) had increased dramatically. In keeping with the De Valera government’s policy of discreetly co-operating with the Allies, Allied air crews who landed in Ireland were assumed to be ‘non-operational’, and therefore were not detained (a fact that the Germans noted with displeasure). It made more sense to all concerned, however, if such forced landings could be avoided and so the ‘Éire’ signs were erected to ensure that pilots knew that they were flying over Irish territory.

The US Minister in Dublin, David Gray, claimed that lobbying from the US delegation had contributed to the decision to erect them. This may have been over-egging the matter, but as early as June 1943 the US Air Force requested that the numbers of nearby lookout posts (such as the one at Dursey Head pictured above) be added to the signs. The numbers offered more precise directions to Allied navigators; the Germans were never informed of them. The original signs were uneven in size, but in summer 1944 they were reconfigured into a standard format: twelve metres long and six metres high, with a rectangular border. Whitewashed stone was used. And the remains of many of them can still be located around the coast.

If the recent media coverage of the uncovering of the Bray sign has piqued your interest Treasa Lynch’s site EIRE signs of WWII offers an excellent overview of the signs. It is worth exploring in tandem with Tim Schmelzer’s photographic project lookoutpost. And for more details of the air and naval conflict off the Irish coast and how it impacted on Ireland, Michael Kennedy's Guarding neutral Ireland will fill in any gaps. Enjoy!