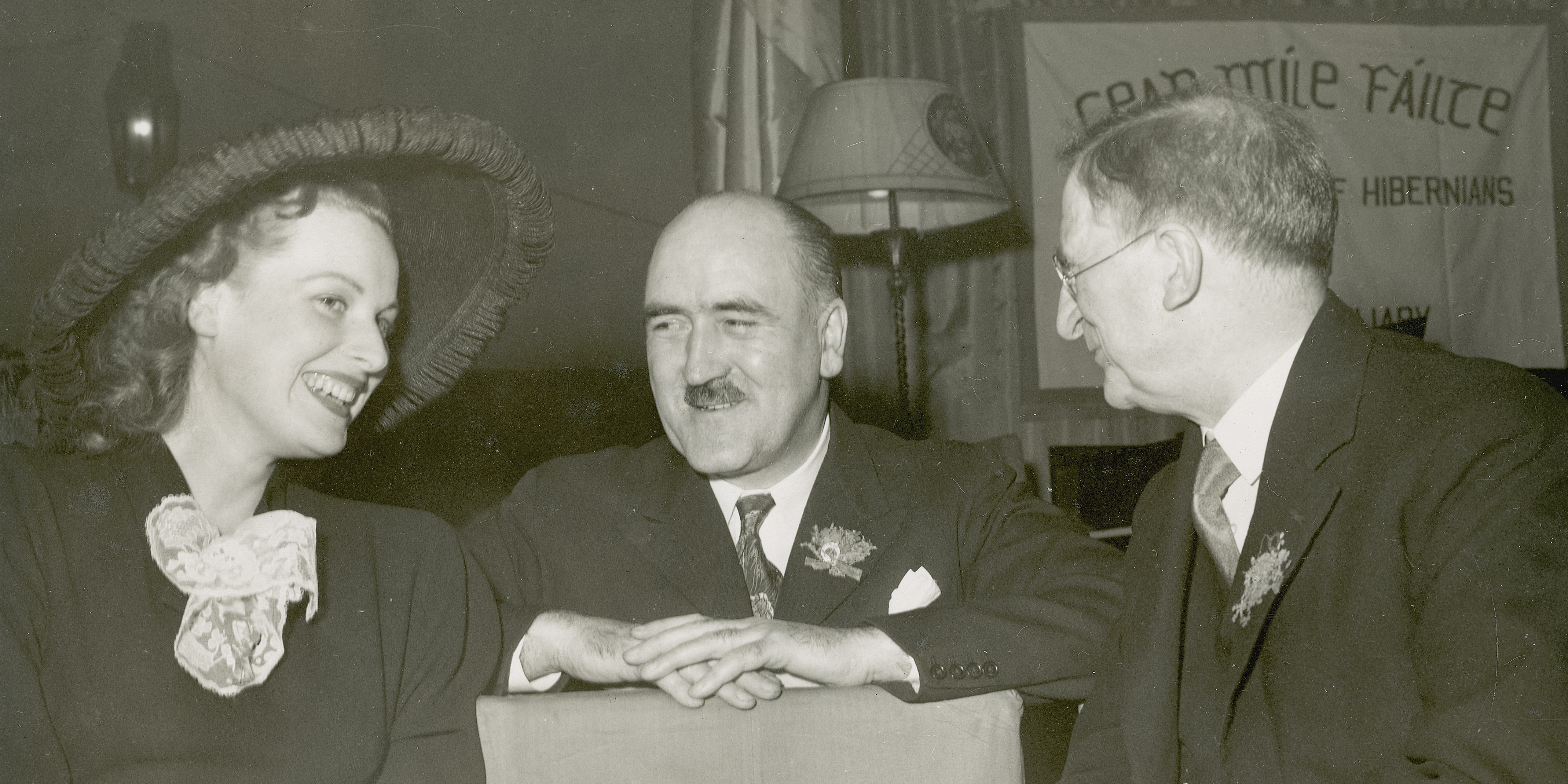 In 1945, as the Irish government took its bearings in the aftermath of the Second World War, Ireland’s minister to the Holy See, Thomas J. Kiernan, suggested that his colleagues should consider new ways of more effectively representing Ireland overseas. One of his recommendations was that the promotion of Irish culture officially become part of the mission of what was then the Department of External Affairs.

How might this be done? Kiernan had devoted some thought to what he starkly described as ‘this matter of national cultural propaganda abroad’.  He proposed, amongst other things, that literature originally written in Irish be translated into English, French, Italian and Spanish, and that ‘an hour of music and prose and poetry’ should be prepared for international broadcast on St Patrick’s Day. And a short film on ‘A day in the life of Catholic Ireland’ aimed at an international audience might, he suggested, ‘have a good moral influence on the younger generations, especially in the former totalitarian countries’.

Lest this seem a tad utilitarian, it should be said that Kiernan was no philistine. He had previously argued for the promotion of Irish culture while serving as director of Radio Éíreann in the 1930s, and a lifelong interest in folklore found expression in 1962 when he published an anthology of Irish folk tales while serving as the Irish ambassador to the US. He was married to the internationally renowned ballad singer Delia Murphy, who regularly hosted musical soirées in their home in Rome during the war. Indeed, his wartime experience seemed to feed into what he suggested in 1945: Kiernan felt that in postwar Italy there was bound to be ‘a demand for escapist, non-war literature’, and that translations of works by Irish authors might be able to fill a gap in the market.

There were very real reasons to use the promotion of Irish art, culture, heritage, and history to carve out a niche in the new international order. The fostering of sympathy for Irish causes and issues, the promoting of trade and tourism, and the rebuilding of relationships strained by wartime neutrality were all pressing issues, and needed all the help they could get. Other countries had successfully leveraged their cultural and artistic output to good effect. Could Ireland do something similar? It made sense that a small, relatively poor country with little influence should try to make the most out of whatever assets, however intangible, that it might have to hand.

The idea that Kiernan was fleshing out had been around for some time. As early as January 1919 Arthur Griffith, writing from Gloucester Prison, had urged his colleagues to ‘mobilise the poets’ to help make Ireland’s case for independence (‘perhaps Yeats would use his muse for Ireland now’). Culture caught the eye, and the idea that Ireland could engage in ‘cultural diplomacy’ had begun to crystallise on the eve of the Second World War. Seán Lemass’s Department of Industry and Commerce had overseen Ireland’s contribution to the 1939  World’s Fair in New York, where Michael Scott’s modernist Irish Pavilion (designed to resemble a huge shamrock from above and adorned with artworks by Seán Keating, Evie Hone and Mainie Jellett) was ultimately selected as the best pavilion on display.

In a separate but related development that overlapped with the fair, in 1939 Dublin’s first chief librarian, Roisín Walsh, had embarked on a North American tour to study how other library networks operated and to promote the works of the fledgling Irish Manuscripts Commission. As she did so Walsh was particularly impressed by Britain’s ‘unofficial ambassadors’ to the US: artists, poets, writers, novelists, and historians, who were ‘probably the best ambassadors she could send’. Walsh ruefully noted that Ireland had neglected to do likewise and, as in her view ‘Ireland and the United States are rapidly drifting apart’, she urged that an ‘organised effort’ be mounted to counter this.

The deployment of Irish culture as a diplomatic tool was formalised from the 1940s onwards, with the establishment of the Cultural Relations Committee of the Department of External Affairs in 1949. But there were differing views on what culture might consist of. The departmental legal adviser Michael Rynne had been concerned about the potential pitfalls of selecting a committee in ‘this island of poets and dilettanti’: who was to be included, and how many noses might be left out of joint as a result? More importantly, what might this committee lean towards? Rynne had no appetite for being left ‘at the mercy of the “high-brow” whose appeal to the mass of the people at home and abroad is just nil’, arguing that ‘the all-Ireland final which is to be played in New York next year will win us more lasting sympathy and understanding in America than a dozen “university exchanges”’ (in 1947 Cavan beat Kerry in what remains the only All-Ireland final played outside the island of Ireland).

The key criteria for an approach towards cultural diplomacy, in Rynne’s view, was that ‘our policy ought to give the foreign public what it wants – not merely what our own, or their, intelligentsia wants – provided that this is consistent with giving them a fairly correct and really attractive picture of Ireland and its people’. For Rynne and many others, the image to be presented to the world was of Irish progress. Contemporary developments like the creation of Shannon Airport and Bord na Mona were potentially of equal, if not greater, interest than Clonmacnoise or the Book of Kells, especially in the ever-important constituencies of American and Irish-American opinion.

If Irish culture and achievements were going to be highlighted, however, it went without saying that the positives would be placed front and centre, and stereotypes would be distinctly unwelcome. Kiernan, when making his original case, had spoken of radio ‘taking the offensive against the crude stage-Irish’, and Irish officialdom was generally unwilling to encourage or give countenance to clichéd depictions of Ireland, especially in the US. When, for instance, one Irish diplomat in Washington saw a preview of John Ford’s The Quiet Man in 1952 he feared that it ‘will be regarded by the Irish-American element here as purporting to portray actual life in Ireland’, in which case ‘we may then have protests.’ In 1963 the Irish consul in Chicago ‘expressed no enthusiasm for having any blackthorn shillelaghs or green hats or clay pipes in the decorations and décor of the various Irish stands’ at the city’s Annual Holiday Folk Fair, and in relation to John F. Kennedy’s 1963 visit to Ireland the same year, a touch of exasperation was perhaps evident in one official’s hope that the hundreds of US journalists who would cover the visit might yet focus on ‘a serious issue to divert them from pigs in kitchens, etc.’. A positive image of a modern Ireland was to be assiduously promoted for audiences overseas. Irish culture, heritage and artistic output had a significant role to play within that. And they still do.

John Gibney is Assistant Editor with the Royal Irish Academy’s Documents on Irish Foreign Policy (DIFP) series and is the co-author (with Michael Kennedy and Kate O’Malley) of Ireland: A voice among the nations. The documents published in the DIFP series for the years 1919-1948 are freely accessible at www.difp.ie. DIFP Vol. XII, covering 1961 to 1965, will be published later in the year. This article was originally published in The Irish Times.

Cover image: A clearly starstruck Frank Aiken and Éamon de Valera meet Irish actress and singer Maureen O’Hara in 1948; in 1952 she starred opposite John Wayne in John Ford’s 1952 romantic drama The quiet man. It was a huge success, though some Irish officials were concerned at how it would be received within Irish-America (UCD Archives).