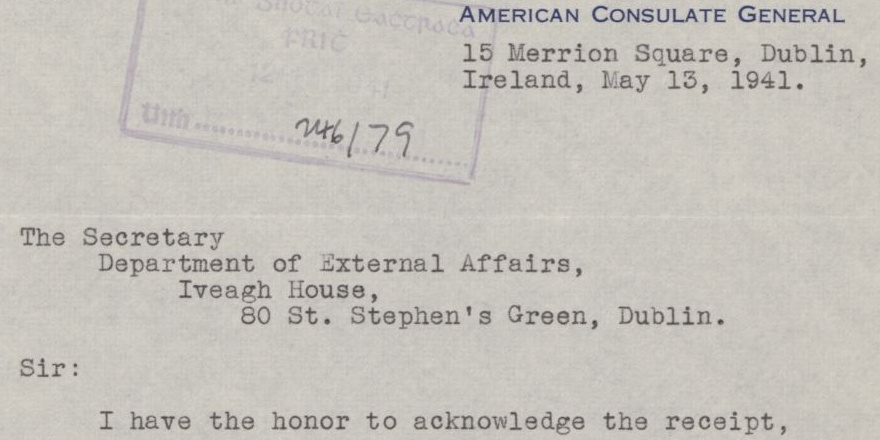 Our May exhibition co-curated with the National Archives of Ireland looks at the history of Iveagh House, the home of the Department of Foreign Affairs and Trade.

In May 1941 the then-Department of External Affairs moved into no. 80 St Stephen’s Green, and have been there ever since. The role of the building since then is the focus of our May exhibition in the National Archives of Ireland, but it also opens a window onto a few other aspects of Ireland’s, and Dublin’s, history.

The headquarters of the Department of Foreign Affairs and Trade was originally built in 1736-37 by Richard Castle for Robert Clayton, the Church of Ireland Bishop of Cork and Ross. Stephen’s Green itself had been laid out in the 1660s, at what was then the southern fringe of a much smaller city. But amidst the urban expansion of the Georgian era it lay at the heart of one of the most affluent and prestigious districts of the city (you can explore the origins and early development of the house and its surrounding area up to 1847 via the Irish Historic Towns Atlas online).

The south inner city retained its prestige throughout the nineteenth century. By the 1850s no. 80 St Stephen’s Green was the residence of Eliza West, but it was sold off by the post-famine Encumbered Estates Court in 1856 and was bought by the Guinness family. They purchased no. 81 in 1862, and the buildings were remodeled and amalgamated by the architect J.F. Fuller to become, in Christine Casey’s judgement, ‘the most opulent city residence of the period’. The modern iteration of Iveagh House has a Portland stone facade with two buildings behind it. A good deal of the original Georgian interior fabric survives, though the opulent ballroom was added in the 1890s.

One could easily make the case that its is extremely difficult to travel between the two historic Dublin residences of the Guinness family – Iveagh House and Farmleigh – without losing sight of something that the great brewing dynasty had paid for: the redevelopment of St Stephen’s Green, the renovation of  St Patrick’s Cathedral, the Iveagh Trust and Iveagh Markets, the enormous brewery itself and the clock tower of Farmleigh itself. At least some of these were testaments to the famed civic-mindedness of the family, and this inclination was carried over into the independent Irish state in relation to their Dublin townhouse. The house was presented to the state by Rupert Guinness, 2nd earl of Iveagh (read Linde Lunney’s account of his life from the Dictionary of Irish Biography). The indenture transferring ownership of the house, dated 7 Dec 1939, stated that ‘Lord Iveagh is desirous of presenting the said lands and hereditaments to the Irish nation as a free gift’. The latter consisted of a considerable portion of property in and around what are now the Iveagh Gardens (a condition was that open spaces were not to be built upon) and of course 80 & 81 Stephen’s Green, the fronts of which were to be ‘preserved so far as possible in its present form’. The state formally took possession on 15 December 1939. 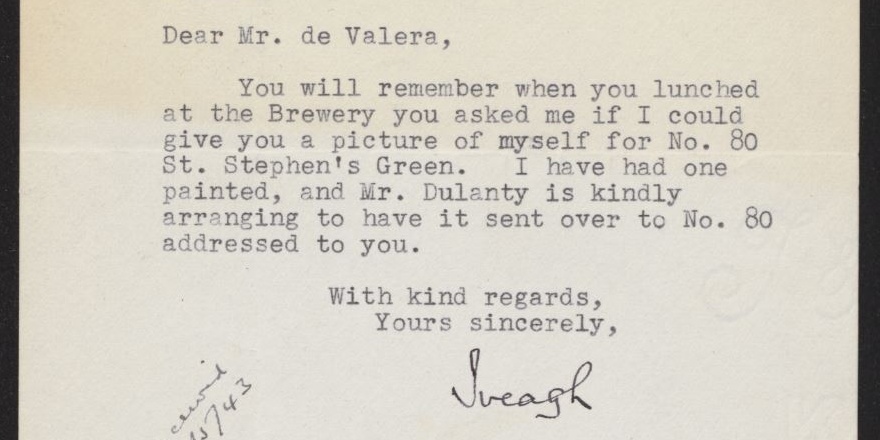 Éamon de Valera, as Taoiseach and Minister for External Affairs, earmarked Iveagh House to house the then-Department of External Affairs as early as October 1939. The reworking of the premises was overseen by the secretary of the department, Joseph Walshe, and his assistant Frederick Boland. Attempts were made to have some of the contents of the house withdrawn from public auction to be bought by the department were unsuccessful, and they did not get all that they wanted. While the Department of External Affairs moved into Iveagh House (the building was renamed after the aristocratic title held the Guinness family) in May 1941, as late as July 1941 the possibility of purchasing furniture from Dr Marie Lea-Wilson of Fitzwilliam Place (the former owner of the painting that turned out to be Caravaggio’s Taking of Christ) was suggested.

Naturally, the Department of Foreign Affairs and Trade collections in the National Archives of Ireland contain a good deal of material on the history of Iveagh House, and for our May exhibit in the NAI we have selected some of the more eye-catching items. Amongst these are two letters, both dated 13 May 1941, from the US and German legations in Dublin acknowledging that the Department of External Affairs had moved to Iveagh House (the US had not yet entered the Second World War; less than three weeks later the German’s bombed Dublin’s North Strand). Given that Iveagh House had contained an extensive collection of artworks, many of which were retained in situ, there is also a response to a query about whether one of the sculptures was a work by Michelangelo. And there is another response to a more incongruous request made in 1961 to use the entrance of Iveagh House as a filming location for a murder mystery.

All of these are on display throughout May 2019 in the lobby of the National Archives of Ireland, Bishop Street, Dublin 8, which is open from 9.30am to 5pm Monday to Friday, and can be viewed online here. Our March and April exhibits are also currently on display outside the NAI reading room.

Images reproduced by permission of the Director of the National Archives of Ireland.