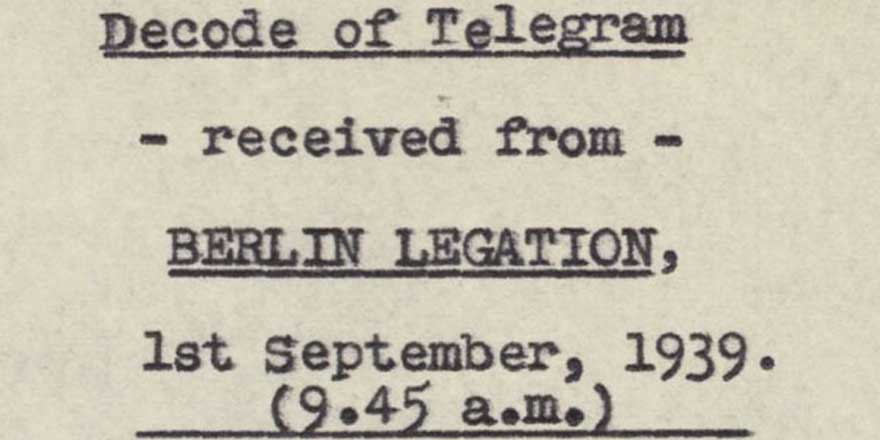 To mark the eightieth anniversary of the outbreak of the Second World War, our latest exhibition co-curated with the National Archives of Ireland explores how Ireland saw the start of the conflict.

In September 1939 the Second World War began; and in Irish terms, the ‘Emergency’ commenced. The Fianna Fáil government of Éamon de Valera declared a ‘state of emergency’ on 2 September 1939, which gives rise to the common description of the period of the war as ‘The Emergency’. To mark the eightieth anniversary of the outbreak of the war, our September exhibit co-curated with the National Archives of Ireland presents a selection of documents relating to how Ireland responded to the outbreak, and course, of the war.

Ireland was unique amongst Anglophone countries in that it maintained its network of diplomats across Europe, in the capitals of two of the Axis powers and in other countries that they would soon occupy (many of their reports have been published in DIFP vols VI and VII). In the exhibit is a decoded telegram from William Warnock, chargé d’affaires at the Irish legation in Berlin, sent on the morning of 1 September 1939 to the Department of External Affairs in Dublin and communicating that hostilities were about to commence as Germany prepared to launch military operations along the Polish coast in the Danzig (Gdansk)/Gdynia area. The following day, a letter sent by Warnock to the Secretary General of the Department of External Affairs, Joseph P. Walshe, conveyed the ‘anxious expectancy’ in the German capital on the eve of the outbreak of the Second World War, noting there is ‘no great enthusiasm for war’. It too is on display, and Warnock sent a steady stream of reports back to Dublin from Berlin until 1943, detailing the experience of life in the German capital in wartime. And 11 September 1939 the Polish Consul in Dublin, Wacław Tadeusz Dobrzyński, Polish Consul in Dublin, wrote to Walshe to formally confirm that Germany had attacked Poland.

Ireland declared its neutrality on the outbreak of the Second World War in order to avoid being dragged into the conflict. Neutrality was not only about protecting Ireland’s international sovereignty: it was also about countering the very real prospect of Ireland becoming a battlefield between the warring powers, with the devastating consequences that would inevitably follow.

The documents above are on display throughout September 2019 in the lobby of the National Archives of Ireland, Bishop Street, Dublin 8, which is open from 9.30am to 5pm Monday to Friday. They can also be viewed online here. The Irish diplomatic papers for the period 1939 to 1945 published in the DIFP series are freely available online at www.difp.ie