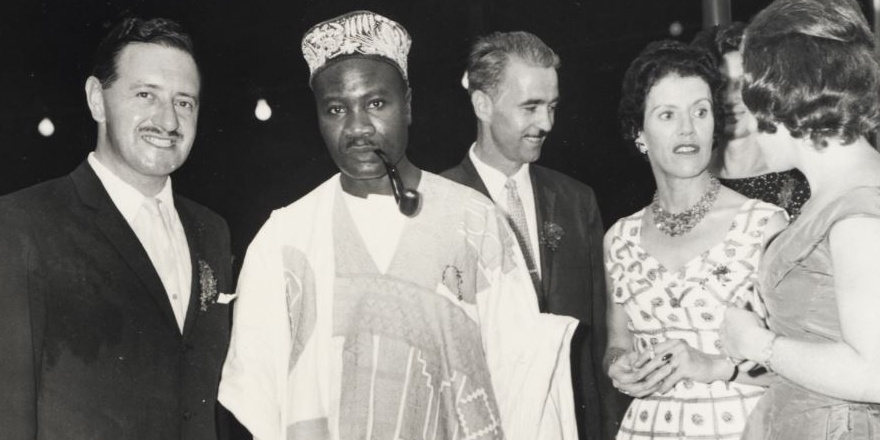 Our March exhibition co-curated with the NAI looks at St Patrick's Day, 1962, in what was then Ireland's only embassy in Africa

In 1960 Ireland established its first diplomatic mission in Africa, with the opening of an embassy in Nigeria. The exhibit we are curating in the National Archives of Ireland for March 2019 comes, conveniently enough, from a single file (NAI/DFA/433/26). And given the month that is in it, that file relates to the celebration of St Patrick's Day in the Nigerian capital, Lagos, in 1962.

Nigeria was an obvious choice as the location for Ireland's first embassy in Africa: there were very close links between the two countries through Irish religious missions in Nigeria and the fact that many Nigerian students studied in Irish universities, and by the 1960s Irish trade and business links with Nigeria were being developed. The first ambassador to Nigeria was Eamonn Kennedy, a veteran of Ireland's first delegation to the United Nations who was appointed to his new post in 1960. The celebration of St Patrick's Day on 17 March was an established routine within the Irish diplomatic service, and in 1962 Kennedy hosted a reception to mark the occasion in Lagos for the first time; 500 guests were entertained, many of whom had studied in Ireland (a separate reception had been held earlier in the day for members of the Irish missionary community resident there).

The file on the reception is perhaps the perfect one from which to create a small exhibition, containing as it does a combination of artefacts, documents and photographs. Amongst the items on display is the photo featured above, of (from left to right) Ambassador Kennedy with the then Nigerian Minister for Health Moses Adekoyejoe Majekodunmi (a graduate of Trinity College Dublin) and his wife Nora Majekodunmi, along with Kennedy’s wife Barbara ‘Janie’ Kennedy; the exhibit also features a photo of the arrival at the reception of the Governor-General of Nigeria, HE Dr Nnamdi Azikiwe. There is also a copy of a personalised greeting card for St Patrick’s Day in Lagos sent out by Kennedy (presumably with a sprig of shamrock, as one survives in the file); the card quietly advertises Aer Lingus. 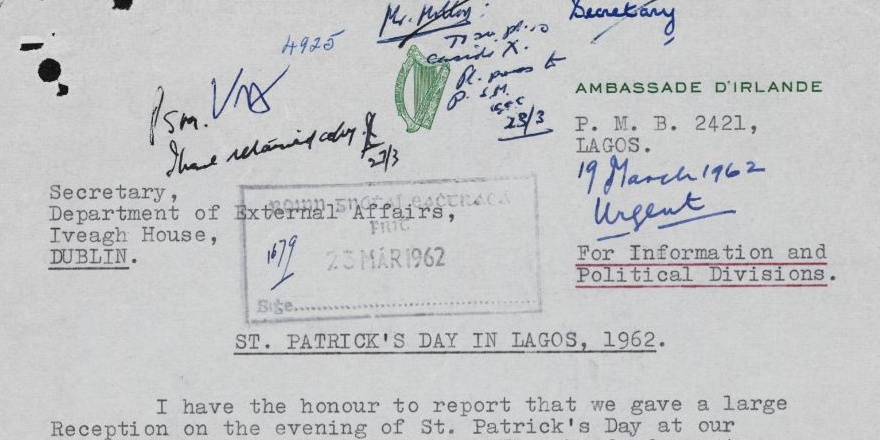 Then there are more straightforward diplomatic documents: a report on the reception itself, a section of which is pictured above, which was widely circulated on its arrival in Dublin (as indicated by the different pen initials at the top of the first page, including those of Minister for External Affairs Frank Aiken). The file also contains a copy of a St Patrick’s Day message from Kennedy to the Irish troops then serving as part of the United Nations Operation in the Congo (Opération des Nations Unies au Congo, or ONUC). Kennedy sent greetings via General Seán MacEoin, the Force Commander of ONUC based at United Nations HQ in Leopoldville, in the Congo; it's not on display, alas, but its existence is a reminder that Ireland's engagement with Africa was broadening and deepening from the early 1960s onwards.

The exhibition, including the documents mentioned above, will be on display from 4 March 2019 in the lobby of the National Archives of Ireland, Bishop Street, Dublin 8, which is open from 9.15am to 5pm Monday to Friday.