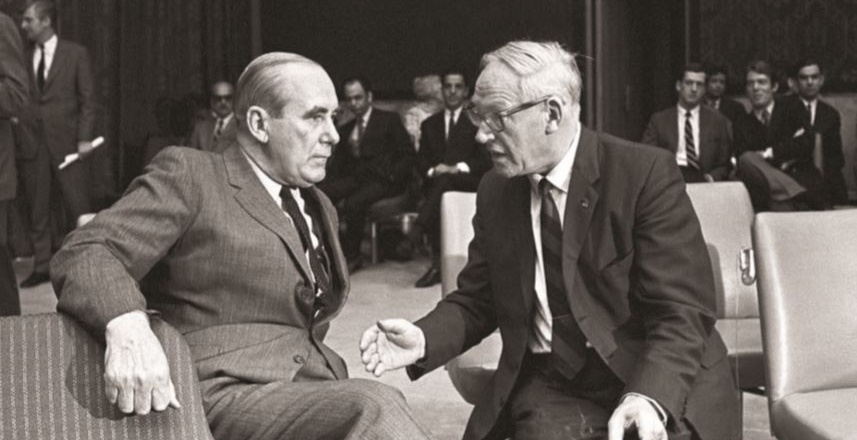 New DIFP exhibition in National Archives on the Irish government, the UN, and the outbreak of the 'Troubles', August 1969

August marks the fiftieth anniversary of the outbreak of the Troubles. Our latest exhibition with the National Archives explores how the Irish government brought the crisis to the UN.

The crisis that erupted in Northern Ireland in August 1969 took the Fianna Fáil government of Taoiseach Jack Lynch by surprise. Following the ‘Battle of the Bogside’ in Derry (12-14 August 1969), the outbreak of widespread sectarian rioting in Belfast, and the deployment of the British army in both cities (14 August 1969), Lynch’s government tried to formulate a response.

One suggestion was that the UN should be called on to intervene. The documents on display focus on 15-16 August 1969; a period that saw intensive discussions between the Irish and British governments on the merits (or otherwise) of UN involvement. They include Irish government documents confirming the government’s decision to propose the establishment of a UN peacekeeping force for Northern Ireland, or alternatively a ‘joint British-Irish peace-keeping force’. The British, for their part, were profoundly opposed to what they saw as outside interference in a domestic matter’ also on display is a British aide-memoire setting out the British opposition to UN intervention that was presented to Lynch’s Minister for External Affairs, Patrick Hillery, and his officials during a meeting in London on 15 August.

Despite this British opposition to the Irish proposal, Hillery presented the Irish case for intervention before the UN Security Council on 21 August 1969. While unsuccessful, this was arguably an attempt to bring international attention to bear on the outbreak of the ‘Troubles’, while also reassuring domestic critics that Lynch was treating the crisis with the seriousness it deserved as it began to spiral out of control.

The documents in question are on display throughout August 2019 in the lobby of the National Archives of Ireland, Bishop Street, Dublin 8, which is open from 9.30am to 5pm Monday to Friday, and can be viewed online here.

‘Taking the Troubles across the Atlantic’: read Daniel Williamson’s account of Irish initiatives at the UN in the early years of the Troubles, freely available from Irish Studies in International Affairs.