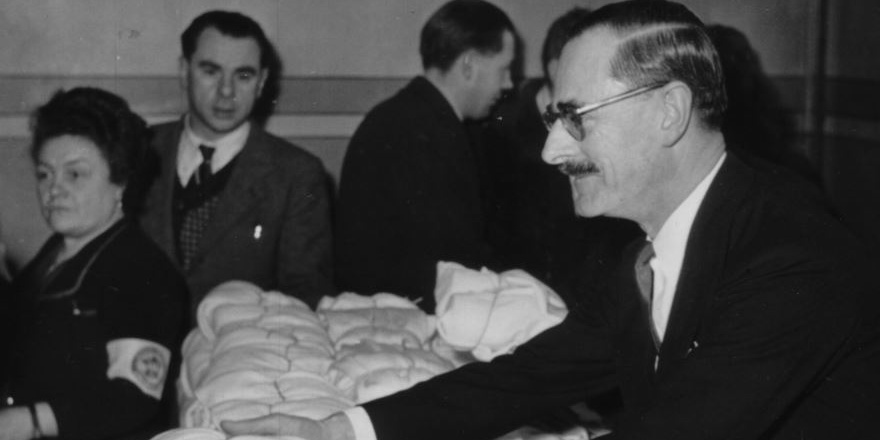 Our July exhibition co-curated with the National Archives of Ireland deals with a little-known aspect of Ireland’s foreign relations: the extensive provision of relief aid across Europe in the aftermath of the Second World War.

After the end of the Second World War, the Irish government followed the example of other neutral states such as Sweden and Switzerland and established humanitarian aid programmes to provide food, material and medical supplies across post-war Europe. The Irish Red Cross and other NGO’s also distributed aid donated by members of the Irish public. Irish relief supplies were distributed in Albania, Austria, Bulgaria, Belgium, Czechoslovakia, Hungary, France, Italy, Germany, Poland, Romania and Yugoslavia.

Having been neutral in the war, Ireland did not discriminate in the distribution of aid. The devastation of the war caused unprecedented economic, political and social disruption, with millions of people displaced across the continent and widespread shortages of food and essential supplies. Criticisms that Ireland was providing aid to the defeated Axis powers as well as their victims faded as the Allies recognized the scale of the international humanitarian crisis facing Europe in the immediate post-war years.

The image above is of aid distribution in post-war France, with Seán Murphy, Ireland’s minister plenipotentiary to France (a senior diplomatic rank just below that of ambassador) taking a hands-on role. Other items in the exhibit include a photo of unidentified but nonetheless delighted Italian girl with a packet of Irish sugar distributed as food aid in Italy in 1946, along with material relating to Irish aid relief distributed in post-war Albania by the Red Cross.

The documents in question are on display throughout July 2019 in the lobby of the National Archives of Ireland, Bishop Street, Dublin 8, which is open from 9.30am to 5pm Monday to Friday, and can be viewed online here. Our May and June exhibits are also currently on display outside the NAI reading room.

Read Mervyn O’Driscoll’s account of Irish aid relief in post-war Europe, which is free to read from Irish Studies in International Affairs.

Image reproduced by permission of the Director of the National Archives of Ireland.