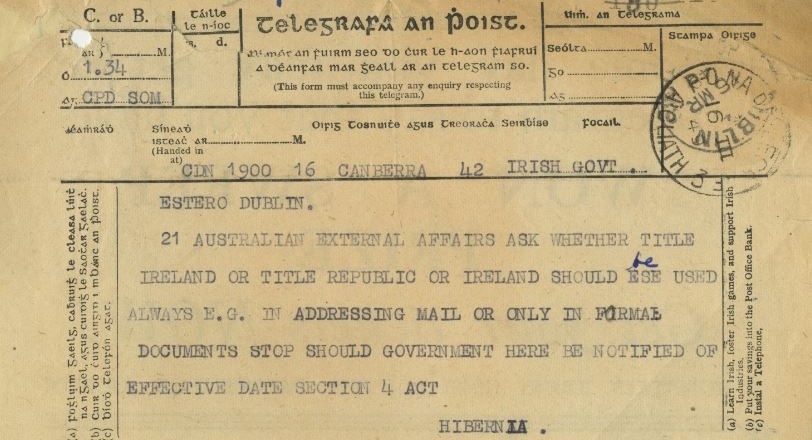 At midnight on 17 April 1949 Ireland officially became a republic, and it is often forgotten that enormous crowds came out to celebrate the occasion.

In Easter 1916 an Irish republic was proclaimed in Dublin. Thirty-three years later, at midnight on Easter Sunday, 17 April 1949, Ireland officially became a republic and the last links with the commonwealth were severed, following the repeal of the 1936 External Relations Act by the Fine Gael-led government of Taoiseach John A. Costello. The manner in which the birth of this new republic was to be ushered in was flagged in theSunday Independent that day, which reported that there would be extensive and elaborate celebrations ('guns will thunder and trumpets will sound') throughout the country to mark the occasion.

As it happened, the celebrations preceded the ceremonies, and both were noted in the press on 17-18 April 1949. Easter Monday was to be marked by a wide range of official events. The centrepiece was to be the General Post Office (GPO) in Dublin's O'Connell Street; the overlap with the traditional commemorations of the Easter Rising of 1916 was deliberate, and did not go unnoticed. But the republic came into being hours before, at midnight on 17 April, and large crowds had assembled in Dublin city centre in the hours beforehand. A carnival atmosphere was evident during the day on and into the evening of 17 April, with restaurants being packed, and tricolours being flown throughout the day.

O'Connell Bridge was to be the centrepiece of the initial ceremonies at midnight; traffic was diverted from O'Connell Street, where stands for the next days event were being erected outside the GPO up to a late hour and which was increasingly packed with onlookers. But the gathering crowds also thronged the quays along both sides of the River Liffey from the Ha'penny Bridge to Butt Bridge, and made use of vantage points of all kinds. The crowds were too large for the authorities to maintain a cordon around O'Connell Bridge, which was to be the venue for a 21-gun salute by artillery facing east towards the Customs House (the sheer numbers present made it difficult to manouvre the guns into position). Ambulances were called out to deal with those fainting in the crush.

This was not just a crowd from Dublin; there was a sizeable representation from outside the capital (including, according to the Irish Independent, a 'party of Londoners' sporting 'miniature tricolours') for what was deemed to be the largest public gathering in the capital since the Eucharistic Congress of 1932. The streetlights on O'Connell Bridge had apparently been amplified, and the beams of searchlights around the city were to converge in the sky over the bridge. Just after midnight, the artillery salute was fired, having been delayed for a few minutes due to the crowds on the bridge. After further salutes a military band sounded reveille before concluding with a rendition of Amhrán na bhFiann (impromptu renditions of which apparently became a regular feature of the nights celebrations). The ceremony that took place in Dun Laoghaire had a maritime twist, with naval vessels illuminating the tricolour as it was raised on the East Pier. Special buses ran from Dublin centre until 1am, but music and dancing took place on the streets late into the night, with bonfires being seen in the Dublin mountains.

This was a national event. In Cork for instance, a similar ceremony in the city centre drew a crowd estimated at 20,000 to witness another 21-gun salute. There were also ceremonies hosted by the Irish legations in Lisbon and Madrid, to give it an international dimension as well.

The main ceremonies in Dublin the next day, 18 April, were mapped onto the traditional Easter ceremonies focusing on the GPO at midday, with a military parade attended by dignitaries from a wide cross section of civic society. High masses were also celebrated in Catholic Church's across the state. In Dublin, members of the diplomatic corps were later received by President Sean T. Ó Ceallaigh at Áras an Uachtaráin, and an hour-long fireworks display (contracted to 'Brock's, Ltd. of London') took place in the Phoenix Park. Finally, the official ceremonies were capped off with a ceilí in Dublin Castle that was scheduled to end at 3am.

There was considerable international interest in the status of the new state (as shown by the telegram pictured above, the question of what to call it had had to be clarified to avoid confusion overseas). Goodwill messages were sent by  heads of state ranging from US President Harry Truman to Burmese President Sao Shwe Thaik Closer to home, however, The Irish Press slammed the Evening Herald for running the headline 'a nation once again' on 18 April, which was described as 'the sort of thing that British propagandists are promoting with the object of countering all future efforts to end partition'. Yet irrespective of political disputation, in April 1949 Ireland's new official status as a republic was marked in the capital and elsewhere by celebrations, even if the memory of the enormous crowds who turned out to welcome the new republic has slipped from view over time.

John Gibney is Assistant Editor with the Royal Irish Academy's Documents on Irish Foreign Policy (DIFP) series. An earlier version of this article was published in The Revolution Papers. Image courtesy of UCD Archives. The DIFP/UCD Archives online exhibition Republic to Republic: Ireland's international sovereignty, 1919-1949 will be launched on 18 April.