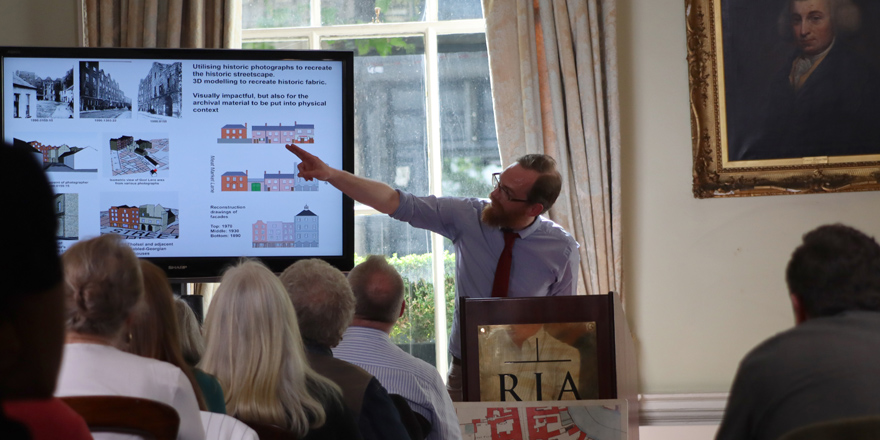 For the first time since 2019, the annual Irish Historic Towns Atlas (IHTA) meeting was held in Academy House, as well as a first hybrid event. Ten years on from Reading the maps publication, speakers were selected from various fields, archaeology, architecture, teaching etc. that use the atlas in aspects of their work.

The series of workshops that took place on 19 May 2022 was an interdisciplinary approach of how the IHTA has been and could be used – in education by researchers, teachers and students; and in practice by heritage professionals, archaeologists, architects and planners, archivists and librarians. Convened in association with the Historic Towns Trust/British Historic Towns Atlas, the day culminated with a plenary lecture by Professor David Dickson (Trinity College Dublin). For the full programme, click here. 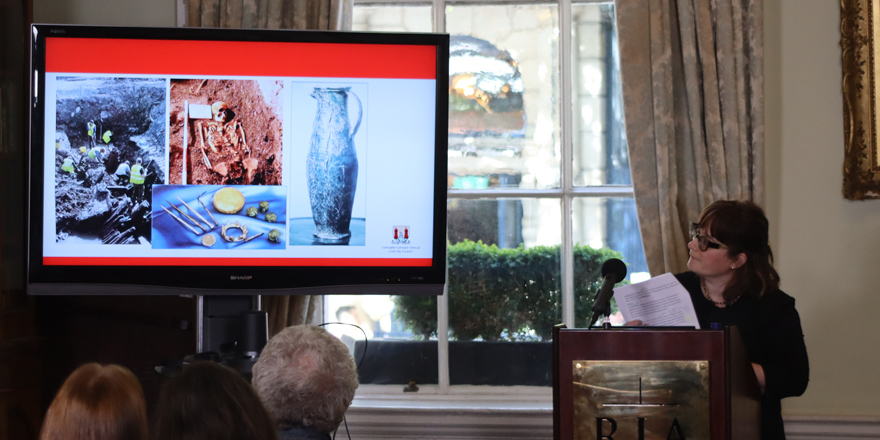 The series commenced with a short introduction by Sarah Gearty (Cartographic and Managing Editor of the IHTA). Michael Potterton (Maynooth University and chair of the IHTA Editorial Board) chaired the first session on Archaeology. Ciara Brett (City Archaeologist, Cork City Council) spoke about how the local authorities can make use of atlas material by using examples in Kildare and while the Cork atlas is not yet published, she has been able to use some of the draft topographical information in uncovering street names for example. A comment from online by Sarah McCutcheon (Executive Archaeologist, Limerick City and County Council) added that IHTA Limerick has assisted around flood planning in the city.

Daniel Tietzsch-Tyler (independent scholar) demonstrated how the IHTA has assisted in his reconstruction drawings, focusing on Fethard, and how the atlas can assist in creating a contemporary topographic environment. He demonstrated how he thoroughly investigates the maps, documentary evidence and IHTA analysis in how buildings and plots have morphed over the centuries. 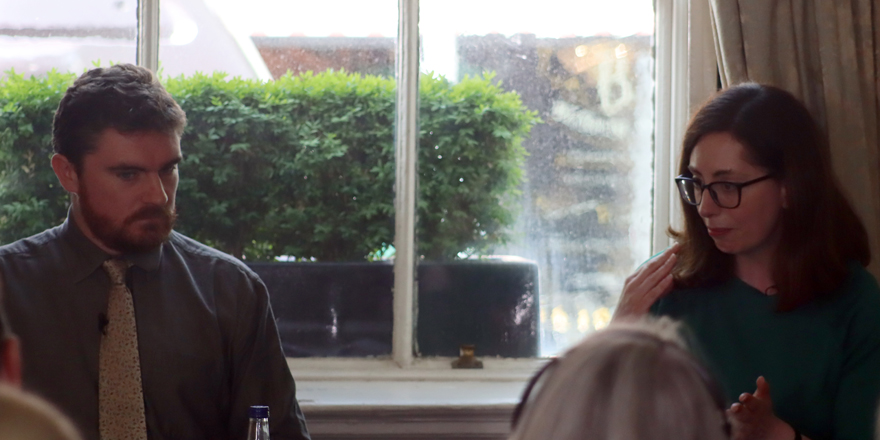 Keith Lilley (Queen's University Belfast and chair Historic Towns Trust) both chaired and spoke during the workshop based on Third-Level Teaching. His paper highlighted importance of the IHTA in the geography classroom and stressed the importance of maps and fieldwork and that the IHTA can be used across different levels of complexity and explained how the urban landscape is a record of its own evolution.

Annaleigh Margey (Dundalk Institute of Technology) looked at how the teaching of history has changed from a traditional lecture format, to a more interactive approach making use of the digital sources available, particularly that of IHTA Online. A useful project followed the methodology of the Digital Atlas of Derry~Londonderry and produced a version for Dundalk using material from the IHTA and other archival sources.

Ciaran McCabe (Dublin City University) focused on how he teaches the development of urban centres in Ireland in the early-modern period. Case studies of published IHTA towns are used to assist students in creating more critical thinking around the evolution of urban form in the plantation period. 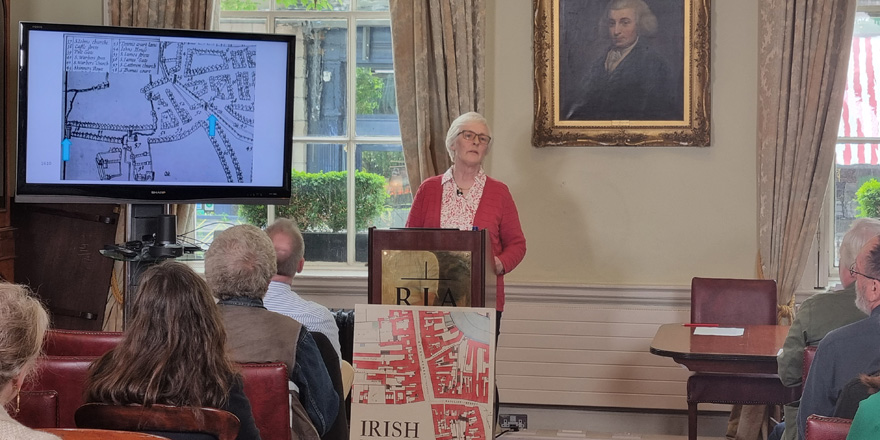 Brendan Teeling (Dublin City Deputy Librarian) chaired the second workshop – Libraries and Archives. Bernadette Cunningham (former Deputy Librarian, Royal Irish Academy) discussed how she directed researchers of urban history to the IHTA in the RIA Library and as a case study, how she delved deep into the Dublin IHTA to discover if the original St James's Gate had a connection with the pilgrim route to Santigo de Compostella. She found that the bibliographical information supplied her with the sources she needed to uncover the date of the gate.

Bláithín Hurley (Local Studies Department, Waterford Libraries) spoke on how the IHTA has not been used in the Waterford Libraries yet and how perceived boundaries to use the atlas can be broken, not only for the public researchers, but also for librarians who can learn more about the IHTA and how it can be applied to local history researchers. 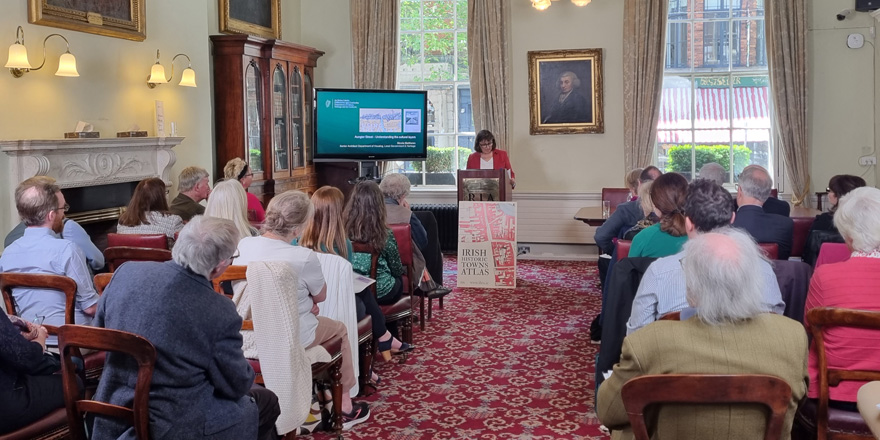 Miriam Fitzpatrick (University College Dublin) chaired the first afternoon workshop on Architecture and Planning where Derry O'Connell (University College Dublin) detailed the use of the atlas in urban design. He spoke about life before and life after the atlas in design projects using IHTAs Sligo and Mullingar as an examples in understanding complex urban plots. He also compared urban morphology across Europe.

Nicola Matthews (Senior Architect, Department of Housing, Local Government and Housing) detailed the Aungier Street Study, the first planned suburb in Dublin, laid out in 1661 by the Earl of Longford, Francis Aungier. The cross-departmental project comprising of Dublin City Architects Conservation Team with research carried out by Dublin Civic Trust and funding from Dublin City Council and the Heritage Council used the IHTA for Dublin that allowed the project to immerse themselves in late seventeenth-century Dublin to understand the concept behind the development of the suburb. 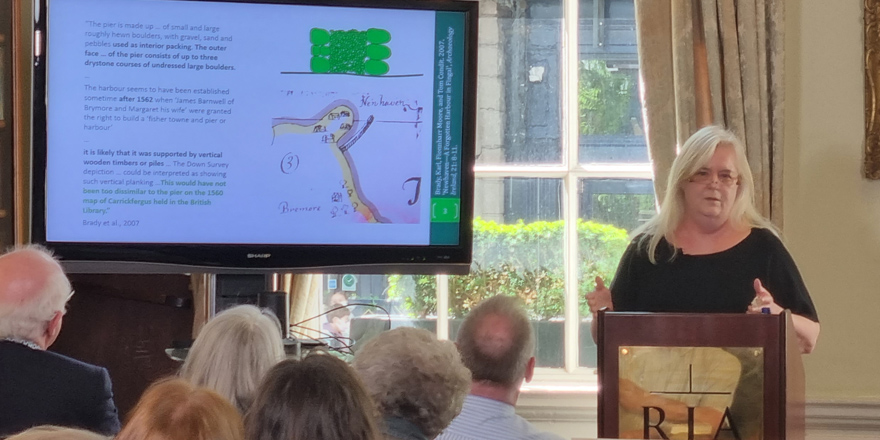 For the Local History and Research workshop, Raymond Gillespie (Maynooth University and IHTA Editorial Board member) introduced Brendan O'Malley (independent scholar) and Elizabeth Shotton (University College Dublin). Brendan's paper focused on one building in Limerick, the Round House, and how he used the maps of IHTA Limerick to decipher when it was built. Elizabeth Shotton spoke on her harbour research and the discovery of the harbour at Newhaven. She used the Carrickfergus atlas to assist in dating the style of harbour at New Haven, which, in turn, opened up comparisons with Dover. 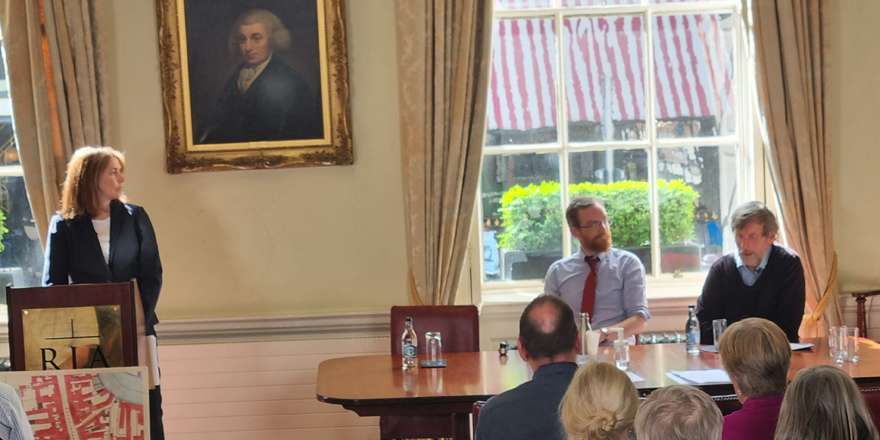 The final workshop of the day was on Digital Mapping and chaired by Rachel Murphy (University of Limerick and Chair of the IHTA Digital Working Group). Brian Lambkin (Mellon Centre for Migration Studies) discussed the Citizens Atlas of Local Migration (CALM) project, which used the IHTA Digital Atlas of Derry~Londonderry that was initially produced in 2013. Good examples of field work and mixing of traditional and digital sources were used in creating the CALM project.

John Elliott (independent scholar) spoke on his interest in the development of medieval and early modern Limerick. He has been involved in creating the Digital Atlas of Limerick with Limerick Museum for several years. He used IHTA Limerick as a foundation for further research into various sources, including the Registry of Deeds. His paper focused on the main street, Nicholas Street and Mary Street, to trace the changes to the buildings over time in the early modern and modern periods. 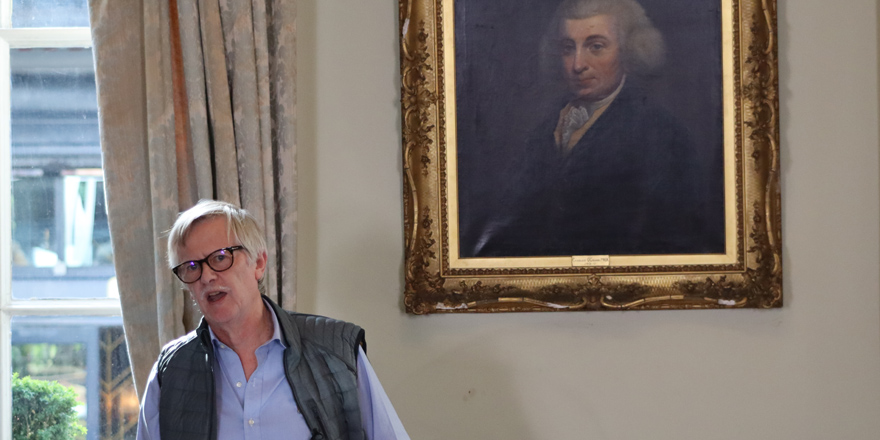 David Dickson (Trinity College Dublin) delivered the plenary lecture – 'Writing Irish Urban History: the sunny uplands and shadows below', which was chaired by Jonathan Wright (Maynooth University and IHTA Editorial Board member). Dickson acknowledged the importance of John Rocque to Ireland's cartographic history from the mid-eighteenth century and that the work of the Ordnance Survey, under Thomas Colby, in this current digital age, probably has bigger impact than ever before.

Watch back the Plenary Lecture here.

For more images from the day