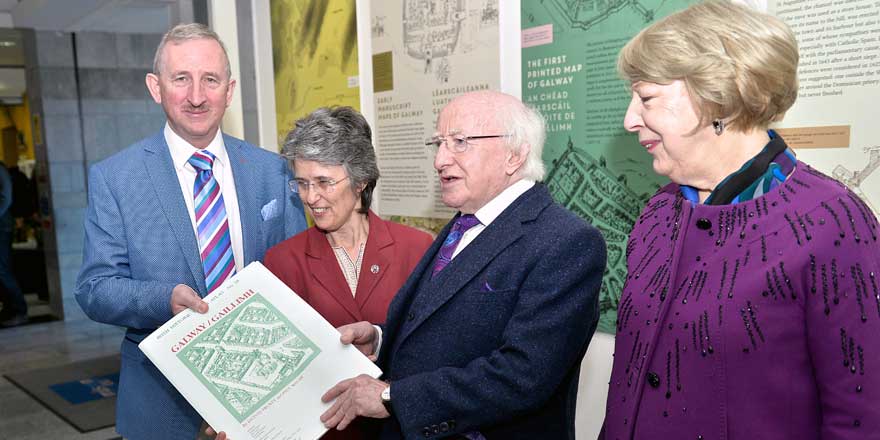 Irish Historic Towns Atlas, no. 28, Galway/Gaillimh by Jacinta Prunty and Paul Walsh was launched by President Higgins in Galway City Museum on 1 November 2016.

President Higgins officially launched IHTA no. 28 Galway/Gaillimh in Galway City Museum on Tuesday 1 November 2016. Galway/Gaillimh is the culmination of years of research and traces the development of Galway from its origins as an Anglo-Norman seaport to the cultural capital today. He said that 'people of Galway will love many things about it and there are opportunities for deeper research'. The atlas contains histories of over 2,500 sites in Galway city from the thirteenth-century St Nicholas’s Collegiate Church and fishing weirs, the fourteenth-century De Burgo Hall, the fifteenth-century town gaol, bridge and town defences, the sixteenth century mills, bakeries, inns and tower houses, the seventeenth-century market places, forts and schools, gallows and bowling greens, the eighteenth-century printing houses, distilleries and masonic lodges, the nineteenth-century Union Workhouse, railways, telegram offices and bicycle factories. Included are beautiful maps and views of Galway dating as far back as the 1580s. Some of these maps have never been reproduced until now and have been sourced from repositories in Ireland and Britain.

Describing the IHTA project, President Higgins remarked 'that it is one of the great strengths of the Academy and it its the great strength of the European support that came from this idea originally, this is the kind of project that shows that scholars are able cooperate with each other, but to do so not as yet another challenging assumption or as a denunciation of any other work but as a fairly comprehensive invitation to others to attach their work to the project, to take it on and, and build more. That is my wish for this project.'

In a recent article in the Galway Advertiser Tom Kenny describes the atlas as the 'most significant publication on Galway in a long time. No Galway library should be without it, no school, no old Galway collector.'

President Higgins also formerly opened an accompanying exhibition on the atlas and said that 'it is a great indication of what is possible when scholarship is made public. In the end of the day all scholarship is aimed at advancing knowledge.' The exhibitions is free to attend and will be on display in the museum over the coming months.

To coincide with the launch, and in collaboration with the Galway Archaeological and Historical Society, the authors delivered a free public lecture ‘Galway: perspectives on the historic town’ on the evening of the launch in St Nicholas’s Collegiate Church.

The Journal.ie 'Back in time: the Galway of 600 years ago shows just how much of the city has survived' by Rónán Duffy.

For a copy of the press release for the launch and publication, please click here.