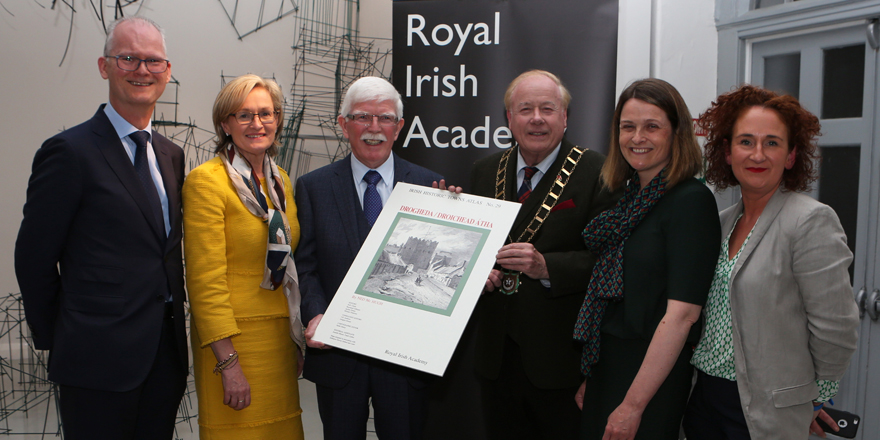 'Drogheda' officially launched in the Highlanes Gallery by Peter Kennedy, President of the Royal Irish Academy

Peter Kennedy, President of the Royal Irish Academy, officially launched the latest in the Irish Historic Towns Atlas (IHTA) series, no. 29 Drogheda/Droichead Átha by Ned Mc Hugh in the Highlanes Gallery on 14 May 2019. Mairead Mc Guinness, MEP, First Vice President of the European Parliament, Fergus O'Dowd, TD, Cllr Liam Reilly, Caithaoirleach, Louth County Council and Cllr Frank Godfrey, Mayor of Drogheda were among the dignatories. There were many members from the County Louth Archaeological and Historical and Old Drogheda Societies present along with Ned's former students, locals and a delegation who travelled from the Royal Irish Academy.

The publication marks the culmination of many years work by Ned Mc Hugh and the team in the Irish Historic Towns Atlas project, which is based in the Royal Irish Academy, Dublin. The new atlas captures the development and rich history of Drogheda from its foundation in the late twelfth century through to the present day. It includes spectacular maps, paintings and views of Drogheda dating as far back as the 1580s as well as a detailed text and specially-produced thematic maps.

President of Ireland Michael D. Higgins received an advance copy of Irish Historic Towns Atlas, no. 29 Drogheda/Droichead Átha on 15 April 2019, in Áras an Uachtaráin. He noted the importance of the IHTA publications as educational tools, in reference to tourism ‘that heritage must begin with history’ and remarked on the importance of the co-operation involved in the IHTA endeavour.

The prestigious Irish Historic Towns Atlas project is part of an international scheme and Drogheda will join over 530 other towns and cities that have been produced by the wider European project. The publication has also received generous local support from Louth County Council and the Highlanes Gallery, Drogheda.

The author Ned Mc Hugh is a retired teacher and native of Drogheda. He has published a variety of papers on the social and political history of the town. He also delivered a lecture about Drogheda in the Irish Historic Towns Atlas on Saturday 18 May 2019 in the Highlanes Gallery.

Irish Historic Towns Atlas no. 29 Drogheda/Droichead Átha by Ned Mc Hugh, is published by the Royal Irish Academy and is available to buy here, price €35.