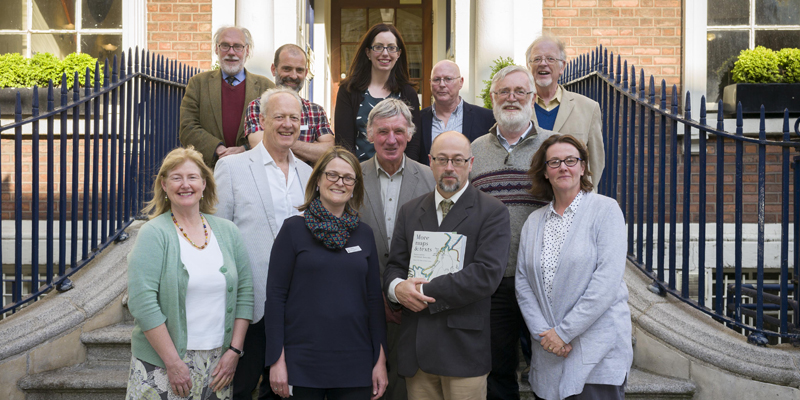 More maps and texts: sources and the Irish Historic Towns Atlas was launched by Keith Lilley at the culmination of the IHTA seminar 'Modernising Townscapes: urban evolution in Ireland and Great Britain from the Reformation to industrialisation, 1540–1840

The annual IHTA seminar took place in Academy House over the 17 and 18 May 2018. This year's theme was 'Modernising townscapes: urban evolution in Ireland and Great Britain from the Reformation to industrialisation, 1540–1840' where towns in Britain and Ireland were compared by Irish and British scholars. The seminar was officially opened with a public lectare held on Thursday 17 May by Prof. Roey Sweet (University of Leicester) on 'Urban modernity and the historic city c. 1700 to 1840'.

Deirdre O'Sullivan (University of Leicester) got day two of the seminar underway with Colm Lennon, MRIA (formerly Maynooth University) in the session on 'Religious reformation and its urban legacies'. Both papers examined the transformation of religious places into urban spaces and functions across Coventry, Gloucester and Norwich in Britain and Dublin and Limerick in Ireland. The second session turned to 'Defensive places: plantation and warfare' where Victoria Anker (Universirty of Birmingham) and Padraig Lenihan (National University of Ireland, Galway) dissected urban defences during the civil war in Oxford, Bristol and York in Britain and siege warfare in the towns of Galway, Derry, Athlone and Limerick in Ireland. After a lively discussion, we were honoured to have the British Ambassador to Ireland, Robin Barnett say a few words as the British Embassy in Dublin co-sponsored, with the Royal Irish Academy, this comparative seminar. The Ambassador was presented with a copy of the British Historic Towns Atlas on Windsor and Eaton as a thank you.

After lunch the focus turned to consumerism with Jon Stobart (Manchester Metropolitan University) and Raymond Gillespie, MRIA (IHTA and Maynooth University) looking at the topography of shops and market places in Britain and Ireland.

The plenary lecture was delivered by Stephen Royle, MRIA (Queen's University Belfast) on British and Irish towns on the eve of industrialisation. The seminar was closed by Keith Lilley and Raymond Gillespie as respective chairs of the Historic Towns Trust and the Irish Historic Towns Atlas. Next year's seminar will focus on British and Irish towns in the nineteenth century. We hope to be able to make the audio of the seminar and public lecture available online in the near future.

The day concluded with the celebration of the launch by Keith Lilley of More maps and texts: sources and the Irish Historic Towns Atlas edited by H.B. Clarke and Sarah Gearty with many of the nineteen contributors were present. For more information and to purchase the publication, please click here.

Photographs of the event