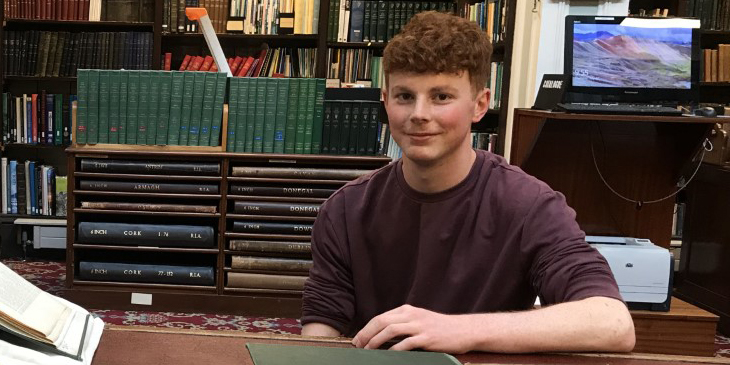 Maynooth University student, Ben Callan, gives an account of his experience with the Irish Historic Towns Atlas as part of the Summer Programme for Undergraduate Research (SPUR) scheme where he worked on a number of ongoing IHTA projects.

My name is Ben Callan and I am a second year history and anthropology student at Maynooth University. I have just come to end of a very enjoyable six-week research placement with the Irish Historic Towns Atlas (IHTA) (21 June–30 July 2021). This placement came about through Maynooth University’s Summer Programme for Undergraduate Research (SPUR), which aims to give students an insight into the world of research and postgraduate study. Owing to the continuing public health restrictions, the entirety of the placement was to take place online, which was initially a little daunting. In many ways I found it difficult to imagine just what an online research placement would entail and how well it would operate without first having met the people I would be working with. Any worries, however, were quickly eased after my first online meeting with my mentors Sarah Gearty, Raymond Gillespie and the IHTA team who laid out a clear and intriguing work schedule for me. By the end of this meeting I was really looking forward to beginning the work. 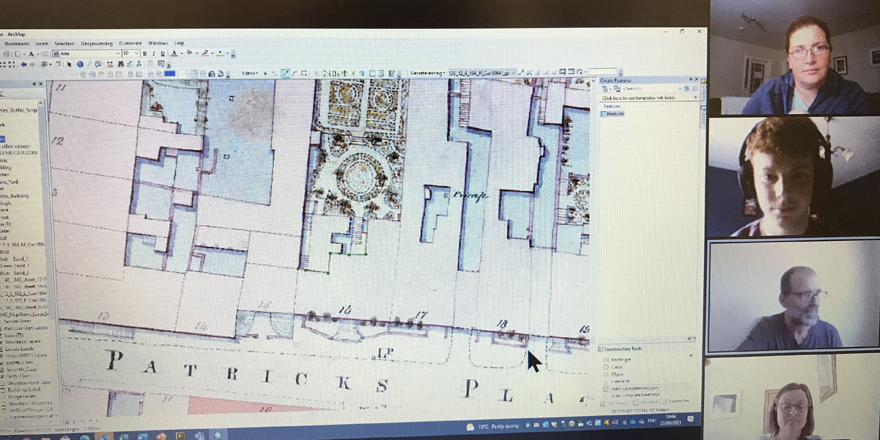 My introduction meeting was clear, informative, and I found myself immediately enthused with the work being conducted by the IHTA.

My first week was taken up with research for the forthcoming Rathmines atlas, part of the IHTA’s Dublin suburbs series. My first task involved checking the c. 1864 Ordnance Survey map of the parish of St Peter against the research that had already been done for the twenty-two sections of the topographical information of the atlas by its author Séamas Ó Maitiú. This work is important as it can illustrate how the names of streets, buildings and other features of the landscape change over time. It offers a date certain features were built or became important enough to be included in a map. I was also responsible for transcribing the text on an 1836 map of the earl of Meath’s estate, which included Rathmines, with the information therein providing valuable insight into the makeup of the landholding structure at the time. I found the work to be very interesting and also eye opening, showing the vast amount of research that goes into producing these atlases. It was very satisfying to find new information and to know that I was making a tangible contribution. 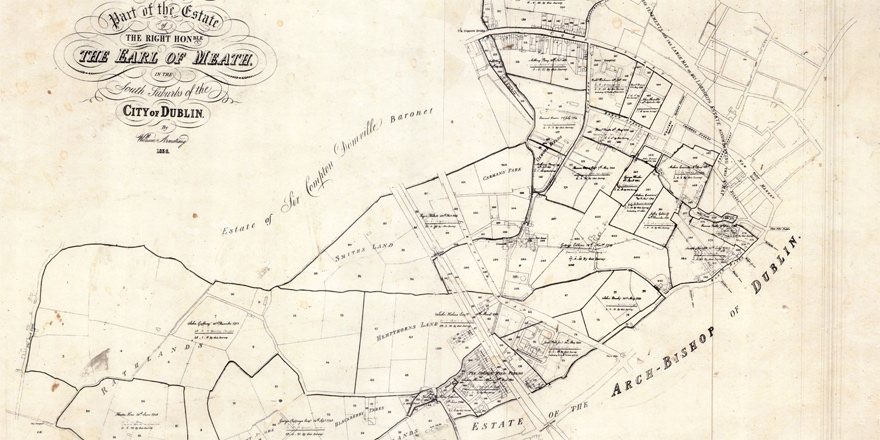 1836 Map of Rathmines, part of the earl of Meath’s estate from a copy held in Dublin City Council. This was my first proper encounter with nineteenth-century handwriting and my placement with the IHTA has improved my reading of such writing immeasurably.

For the next three weeks of my placement I carried out primary source research for a further two atlases that are in the works. Two weeks were spent on the Cork atlas, where I worked with a wide range of eighteenth- and nineteenth-century parliamentary sources to find references that would be useful to both the essay and the topographical information section of the atlas. Whether the references I found corroborated other sources or whether they led to entirely new additions to the atlas, I found going through these sources to be almost addictive, always sure that I would find something useful on the next page. In week four I worked exclusively with the Registry of Deeds to research and transcribe information relating to the landholding structure in Drumcondra, which will be part of the Dublin Suburbs series. These three weeks, apart from introducing me to intensive primary source research, also underscored the importance of documentary sources to the makeup of the atlases.

The work I carried out in my fifth week highlights an important new direction that the IHTA are taking with their publications. Using GIS mapping they are creating highly accessible digital versions of their atlases. The value of online access to historical material and sources, while already acknowledged as important, has been amplified and put in sharp focus by the pandemic. My work involved preparing topographical information from the Dungarvan atlas to be inputted into its digital counterpart. As someone who thoroughly enjoys spending hours perusing GIS maps like the Archaeological Survey of Ireland’s Historic Environment Viewer, it was great to personally contribute to the digitisation of this atlas. 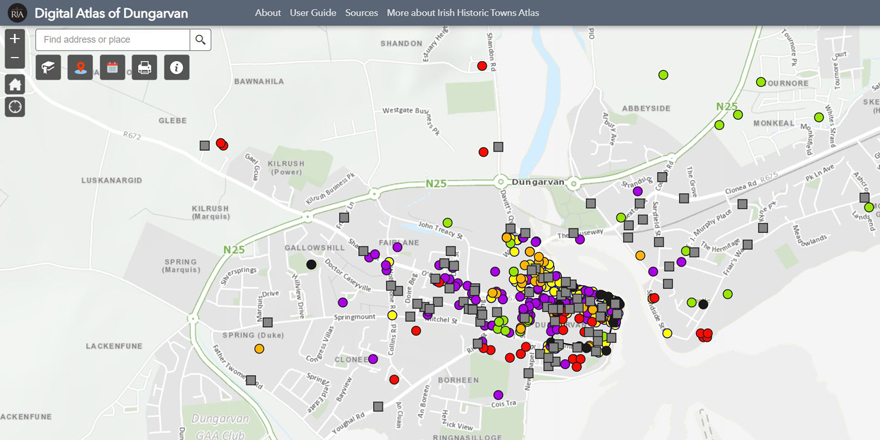 A view of the Digital Atlas of Dungarvan, which offers a visually appealing and intuitive way to access the maps and texts from the Dungarvan Atlas.

Thankfully I did finally manage to visit the Academy on 19 Dawson Street, Dublin in person for one day during my placement. After a tour of the library I got the chance to do some research with some of the most commonly referenced sources in the atlases. To view in the flesh these sources that I had time and again seen cited in the topographical information section of the atlases was truly gratifying. As I soaked in the grand and historic surroundings of Academy House and the Library, it was hard not to feel a twinge of regret that I had not been able to spend more time there. The library in particular was inspiring and I could have spent days there perusing the shelves. In spite of the restrictions, however, the IHTA team did a fantastic job in providing such a fulfilling, enjoyable and varied research experience for me online. I feel like I have learned so much and improved greatly in many areas, particularly my primary source research and teamwork and collaboration skills. I would like to thank the SPUR team at Maynooth, Raymond Gillespie, Jennifer Moore, Frank Cullen, Howard Clarke, Ruth McManus, Barbara McCormack, Dave McKeon, Rachel Murphy and in particular my mentor Sarah Gearty who planned my placement with great care and enthusiasm, always taking the time to answer my questions and guide me through my first research project. 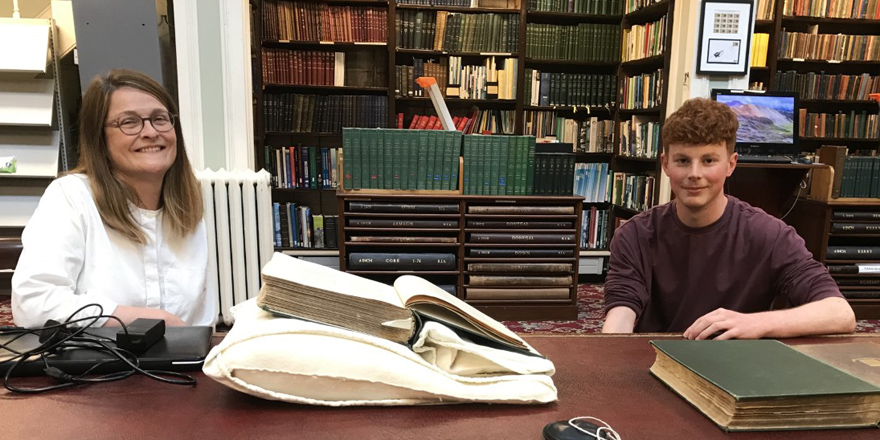 Sarah Gearty and myself in the Royal Irish Academy Library.