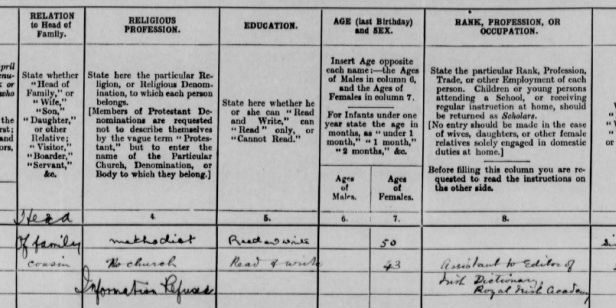 With the 2016 census taking place on Sunday, 24 April this year, my thoughts turned to the Royal Irish Academy staff of over 100 years ago who filled out their census forms on 2 April 1911. Out of curiosity, I searched the 1911 census for anyone who listed themselves as employed at the Royal Irish Academy. The 1911 form asked only for one’s occupation, not place of work and as such, I was not holding out hope of finding anyone so thorough as to include it! However, up popped Maud Anna Evans Joynt (incorrectly listed on the census website as Maud Anna Emma Joynt).

The census form shows the 43 year old Joynt living at 21 Annesley Park, Rathmines, with her cousin Ellen Jane Bell (50). Both women were unmarried. Maud gives her occupation as ‘Assistant to the Editor of Irish Dictionary, Royal Irish Academy’ and notes that she speaks English and ‘some Irish’ which is perhaps overly modest. 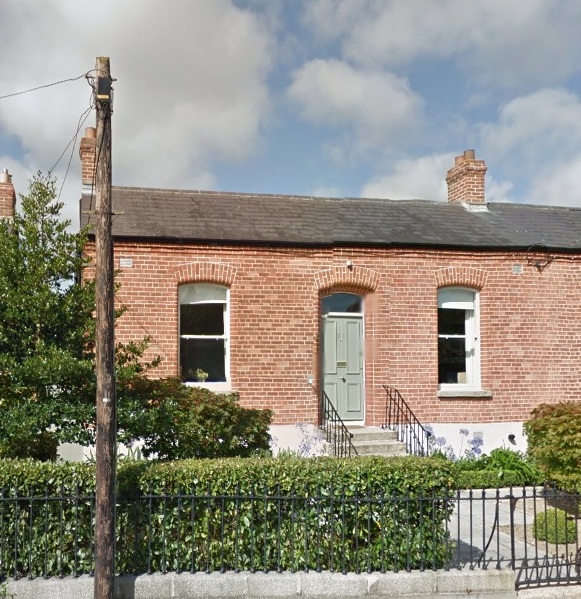 While her cousin Ellen is listed as a Methodist, Maud states that she has ‘no church’. The enumerator has expanded on this, noting that the information was refused. This is interesting as Joynt was raised in a Methodist family and her brother, Rev. George Arthur Joynt, was a Methodist Minister and later President of the Methodist Church in Ireland. In fact, in her later life Maud would be described by one of her peers, Mary Hayden, as 'a Buddhist and a Theosophist.'[1]

More interestingly, under respective infirmities, both women entered ‘unenfranchised’ [sic]. This small act of dissent comes as no surprise as Joynt had long been active in groups advocating the advancement of women, both politically and professionally. Among the groups in which she was involved were the Irish Women’s Franchise League, Irish Women’s Progressive Union and the Irish Association of Women-Graduates and Candidate Graduates. Many Irish suffragettes refused to participate in the 1911 census as a protest against their disenfranchisement. It is thought to be for this reason that Hanna Sheehy-Skeffington did not enter her details on the census, although the enumerator tried to circumvent this by entering her (largely incorrect) details himself. Maud Joynt was a correspondent of Hanna and Francis Sheehy-Skeffington, Dr. Kathleen Lynn and Mary Hayden amongst others, and letters written by her can be found among the Sheehy-Skeffington Papers at the National Library of Ireland.

Maud Joynt was born on 7 March 1868 at Woodberry House, Co. Roscommon to Lily Anna Holton and Christopher Joynt MD, a Surgeon General with the Indian Army. A letter from Maud’s sister Mabel Sarah detailing Maud’s early life was sent to the Irish scholar Eleanor Knott and is now preserved in our Eleanor Knott Collection [2]. In it, Mabel Sarah notes 'Most of our family was born in India but it was always Maud’s proud boast that she was a real Paddy and was born in Co. Roscommon, in 1868, although she spent part of her early childhood in India. I used to hear from my father that she was an unusually precocious child and was able to read when very young. Indeed he taught her a little Greek when she was 5. A very early notebook of hers that I came across shows great originality of mind and a remarkable assortment of different kinds of knowledge for a child.'

Indeed, once home in Ireland Maud had a brilliant academic career, first at Alexandra College Dublin and then at the Royal University, where she graduated with a first-class honours BA (1889) and MA (1890) in modern literature (English, French and German). After teaching German for a time at the Methodist College in Belfast, she resigned her position and travelled through Europe - to Paris, Heidelberg and Florence. In a strange twist, she left some of the books she bought in Florence in a house she had been renting from Frances (Cissie) Sinclair, the aunt of Samuel Beckett, who later found the books in his aunt’s house and kept them for his own library. In a letter to a friend he noted 'Cissie pushed up some Italian books that had been left behind by outgoing tenant... All bought in Florence by Maud Joynt at the end of the last century. She might have been nice to know'.[3]

Upon her return, she resumed teaching positions at Loreto College, Alexandra College and Dominican College. Having an interest in the revival of the Irish language, she attended the School of Irish Learning in 1906 and 1907. 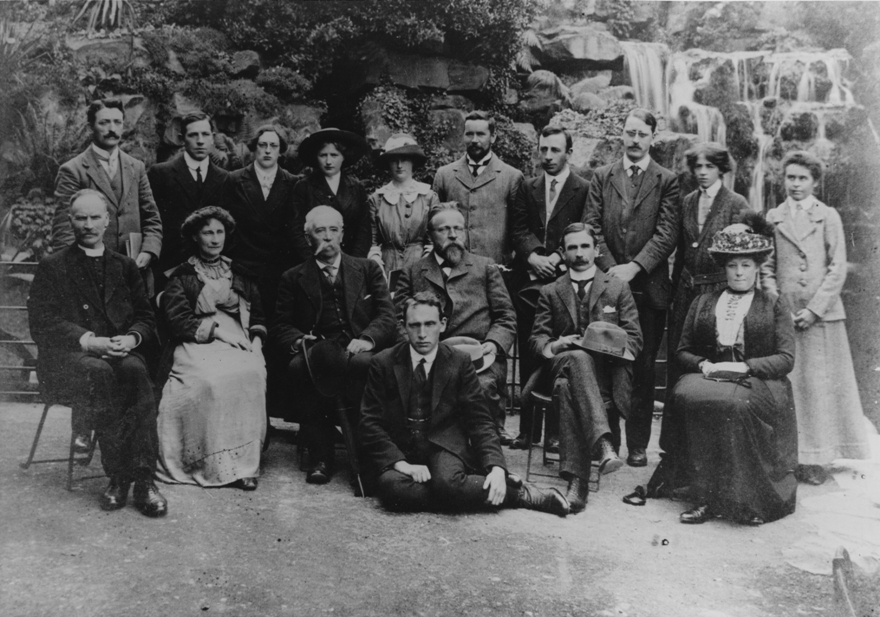 In January 1909, she was employed as an assistant for the Dictionary of the Irish Language, a project based here at the RIA, much like our current research projects. Between 1913 and 1976 it published a Dictionary of the Irish Language in 23 fascicules containing approx 35,000 entries.[4] Its General Editor was Professor Osborn Bergin and Eleanor Knott worked alongside Joynt as an assistant. One review of the volume Fasciculus II, jointly edited by Knott and Joynt, noted that they had 'attained a standard of excellence never before attained in Irish lexicographical work and rare in the lexicographical work of any country'[5]. She seems to have been a popular member of staff, with The Irish Times noting in 1929 how 'she is well known to all frequenters to the Royal Irish Academy'.[6]

Joynt also translated medieval Irish manuscripts, which she saw not only as a scholarly task, but one which was infused with a nationalist purpose. In an article entitled ‘The Future of the Irish Language’ published in The New Ireland Review in 1900, Joynt argues 'Why should we not prepare the way for the coming poet of the Gaelic race, by providing him with books worth reading in his native tongue? We need not be afraid of impairing his originality or his racial and political instincts by so doing'.[7] This was only one of her many contributions to journals, periodicals and magazines.

Active in matters of social justice and reform, a perusal of newspaper archives shows Joynt’s wide range of interests. She can be found attending meetings of the Irish Women’s Progressive Union (1899), being elected a member of the Gaelic League (1899), being appointed to the Irish Committee of the Pan-Celtic Congress (1899), attending a meeting of the Philanthropic Reform Society (1901), attending meetings of the Alexandra Guild Tenement Company which aimed to assist 'not only with the housing problem but also with the moral and mental improvement of the people'[8] (1902), signing a letter protesting against Hannah Sheehy-Skeffington’s dismissal as a teacher at the Rathmines School of Commerce (1912), donating money to Inghinidhe na hÉireann (1913), signing a letter advocating peace and pacifism from the Irishwoman’s International League (1922) and subscribing to ‘Chraoibhin Aoibhinn’, the Douglas Hyde Testimonial (1935).

In many ways, as a Buddhist, theosophist, vegetarian and feminist, Maud Joynt was ahead of her time and in a minority in early twentieth-century Dublin. While Eleanor Knott is rightly known for her work, particularly with regard to Early Irish and bardic poetry, Maud Joynt remains a relatively unknown figure. This is despite her being awarded an honorary D. Litt. by the NUI in 1937 'in recognition of her scholarly works and of her endeavours for the university education of women'[9].

Joynt died in July 1940, nine years before her former colleague Knott would become one of the first elected women members of the RIA. Knott described her former colleague in glowing terms – 'She was a singularly industrious worker, rigidly methodical and conscientious, unfailingly clearheaded...' but noting also her 'gift for friendship, her solicitude and kindness'.[10] The Kilkenny People concurred, stating that '...those who were privileged to know personally a lady of such rich and gentle mind will not soon forget her'.[11]. Maud Joynt is buried in Mount Jerome Cemetery, South Dublin, alongside her sister Mabel Sarah and two brothers.

The work of Joynt, Knott, Bergin and others on the Dictionary of the Irish Language has been digitised and is freely available at www.dil.ie.

[4] The Electronic Dictionary of the Irish Language eDIL (www.dil.ie)