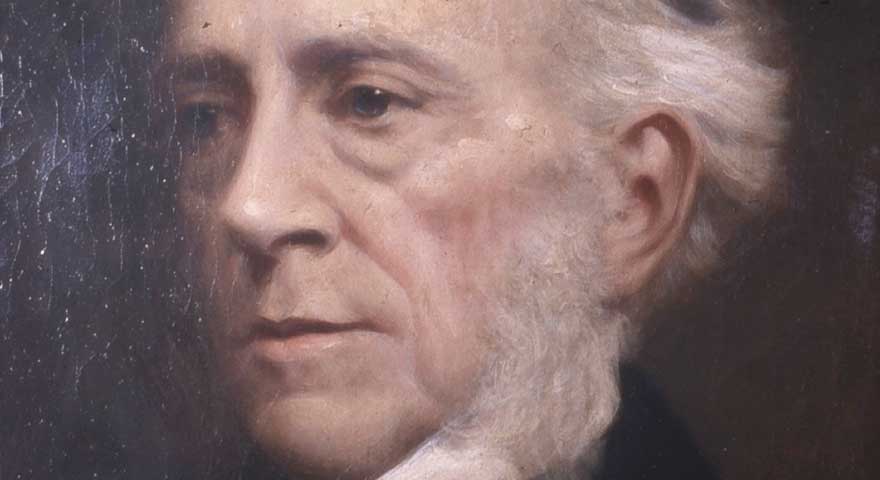 Charles Haliday, "an early riser", and the RIA Library

'Dublin Documents', a Library exhibition highlighting items from the Haliday collection, will run from 9 January to 5 May 2017.

To celebrate the benefactor of this remarkable manuscript collection read the entry on Charles Haliday from the Dictionary of Irish Biography, by C. J. Woods, below.

Haliday, Charles (1789?–1866), banker, bibliophile, and antiquary, was the second of three sons of William Halliday (1754?–1830), who was a native of Carrick-on-Suir, Co. Tipperary, and an apothecary in Arran Quay, Dublin. The eldest son was William Haliday (qv); the youngest was Daniel Haliday (1798–1836), who studied medicine in Edinburgh and settled in Paris, where he became acquainted with John Allen (qv) and Sir Jonah Barrington (qv). Where Charles Haliday was educated is not known. He went to London to learn about business (1808 or 1809), becoming a clerk in Lubbock's bank before starting up on his own account as a commission agent in London to John Norcot D'Esterre (1797–1815), a provision merchant of 11 Bachelor's Walk, Dublin, famous for being killed in a duel by Daniel O'Connell (qv). After his elder brother William died (October 1812), William's father-in-law, Finlay Alder, a timber and bark merchant with premises also in Arran Quay, offered him a place in his business. He returned to Dublin (March 1813) and took up residence in Arran Quay. Charles Haliday – he used this spelling from c.1825 – rose to prominence in Dublin business circles: always describing himself as a ‘merchant’, he was secretary and then vice-chairman of the chamber of commerce (1833–49, 1849–66 respectively), a very active member of the Ballast Board (the Dublin port authority) (1833–66), and a director of the Bank of Ireland (1838–66). As governor of the Bank of Ireland (1858–60) he appeared before the house of commons committee of inquiry into the working of the Irish bank act of 1845 and secured the passing of an act permitting his bank to lend on mortgage (1860).

When in London as a young man Haliday had literary interests and friends (one was Charles Lamb); back in Dublin he came to read solely for information, as indicated in his diary (1836–9). A prolific writer of letters to the press on business affairs, Haliday was the anonymous author of pamphlets on social matters, most notably: An inquiry into the influence of the excessive use of spirituous liquors in producing crime, disease and poverty in Ireland (1830), a short history of Irish law on distilling and brewing as well as perhaps the first Irish temperance pamphlet; Observations on the habits of the labouring classes in Ireland (1836), which also identified drinking as a social problem; A letter to the commissioners of landlord and tenant inquiry on the state of the law in respect to the building and occupation of houses in towns in Ireland (1844), showing him to be an early advocate of public health; An appeal to his excellency the lord lieutenant on behalf of the labouring classes (1847), on access to the sea (‘the means of preserving health and promoting cleanliness’) along the route of the Dublin–Kingstown railway. His name did appear in a posthumous pamphlet on a matter occupying his mind a few days before his death, A statistical inquiry into the sanitary condition of Kingstown (1867). Some business of the Ballast Board – a proposal that the Admiralty remove lighthouses from the board's control – caused Haliday to write another pamphlet, signed by Charles Vereker (1818–85), secretary, Letter to the right hon. Sir William Somerville, Bt, M.P., from the corporation for preserving and improving the port of Dublin with observations on the report of Captain Washington, R.N., to the harbour department of the Admiralty on the state of the harbours and lighthouses on the south and south-west coasts of Ireland (1849). This led the board to commission Haliday to research and write a history of Dublin port and harbour (c.1850), which he proceeded to do with his usual thoroughness.

His work came to public notice in a paper, ‘On the ancient name of Dublin’, he read to the RIA (to which he was elected in January 1841) and which was published in its Proceedings (1854). Haliday's historical pursuit extended to the Ostmen or Vikings who had founded the place and he made good use of Scandinavian as well as Irish sources. It culminated in the posthumous, The Scandinavian kingdom of Dublin (1882; 2nd ed., 1884), edited by his friend John P. Prendergast (qv). Haliday is best remembered for his collection of Irish pamphlets. This he formed over the years, buying from auctioneers and waste-paper merchants. Its value lies in its size (some 35,000 items), its historical range (the earliest item is dated 1578) and its eclectic nature (Haliday seems to have rejected very little and had a penchant for anything of mercantile interest). Probably he had the collection in mind when he leased a villa at Monkstown, Co. Dublin (1834). Certainly, he did so when he bought Monkstown Park (1843), pulled down the old house and built a villa to his own design containing a large library in which he arranged his pamphlets chronologically.

Charles Haliday died at Monkstown 14 September 1866 aged 77. His wife was Mary Hayes of Mountmellick, Queen's Co., niece of Thomas Hayes (1759?–1831), major-general in East India Co. service; she died 10 April 1868, having donated all his rich collection of ‘pamphlets, tracts and papers &c. relating to Ireland’ to the RIA (January 1867). Some 3,000 duplicates were transferred (1914) to the NLI and were bound (1923) to form P 479–789 in its pamphlet series. There are 22 volumes of pamphlets labelled ‘Halliday collection’ (sic) at Farmleigh, probably acquired by the 3rd earl of Iveagh (1937–92). Haliday was an early riser, a rider to hounds, and a violinist. A portrait of him by Stephen Catterson Smith (qv) is in the RIA.